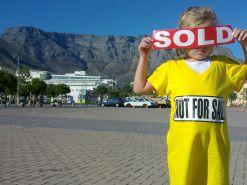 Traffickers will have to deal with the law
once South Africa’s new legislation comes
into force. In Cape Town in 2011, the Body Shop
South Africa and Child Welfare presented
over 43 000 signatures to Parliament’s
Portfolio Committee for Justice and
Constitutional Development.
(Images: The Body Shop)

In a significant move to protect the rights of South Africa’s women and children, Parliament’s justice portfolio committee chairperson Luwellyn Landers announced that the Prevention and Combating of Trafficking in Persons Bill will be passed in April.

South Africa is one of the few countries in the world that has achieved the human rights milestone of enacting legislation to fight trafficking.

Once the Bill becomes an Act in parliament and is fully operational, it will be one of the most comprehensive laws against human trafficking in the country.

All countries – including South Africa – that are signatories to the UN protocol to prevent, suppress and punish trafficking in persons, especially women and children, are encouraged to pass domestic legislation to fulfil their international obligations.

The South African Bill, which has been under discussion in Parliament for the past five years, was drafted in response to the UN’s global call for action against trafficking.

There are a number of reforms that the Bill will bring into place. It provides for prosecution of people involved in trafficking and also for harsh sentences to be imposed.

The intention of the legislation is to prevent and stop trafficking in people, and provide protection and assistance to victims of trafficking.

South Africa’s decisive action against trafficking is sending out a clear message that the country’s women and children are not for sale.

The decision has been welcomed by ECPAT, an international global network of organisations working together to eliminate child prostitution, child pornography and the trafficking of children for sexual purposes; Child Welfare South Africa (CWSA), as well as The Body Shop, a global natural and ethical cosmetics retailer.

Together these organisations have been actively involved in an on-going global campaign, spearheaded by The Body Shop, to urge governments to do more to protect the 1.2-million children and young people being trafficked every year for sexual exploitation.

Trix Marais, acting national executive director of CWSA, said that the Bill is an important step forward to protect the victims of trafficking. “Trafficking is nothing less than contemporary slavery,” Marais said.

She said it is important that the Bill doesn’t only look good on paper. Training is needed to ensure that the legislation is implemented effectively.

“We need to know how to the use the Bill so we can enforce it,” she said.

The Body Shop group is famous for its campaigns that raise awareness about important social and environmental issues such as violence in the home, HIV and Aids, and renewable energy.

Its campaigns have been successful in reaching key decision makers who can bring about change. Now, its drive against trafficking is another success story.

The Body Shop South Africa’s campaign manager, Lana-Anne Scheepers, says that the passing of the Bill is a step in the right direction to protect children from trafficking, a crime that has been largely unaddressed.

With the legislation in place, trafficking criminals will no longer be able to operate without fear of repercussion.

The response to the campaign – both at home and globally – has been unprecedented.

In South Africa, the campaign put pressure on the justice portfolio committee to pass the legislation. Last year, CWSA and The Body Shop South Africa led a march to Parliament where they handed over a petition containing 43 000 signatures to lobby the government to approve the Bill.

In October last year, the campaign resulted in one of the largest petitions ever to be presented to the UN. All over the world, 7.2-million signatures were collected, calling on governments to take urgent action to stop sex trafficking.

The campaign has been so successful that 14 countries across the world have committed to adopt new legislation against trafficking.

Human trafficking is one of the biggest money-spinners in the organised crime world.

According to Corinne Sandenbergh, director of Stop Trafficking of Persons, an organisation that creates awareness and educates the public about the realities of human trafficking, this industry is the third largest international crime, following illegal drugs and arms trafficking.

Although the extent of trafficking operations in South Africa is not known, large numbers of people are believed to be trafficked each year, within South Africa and across its borders.

In a parliamentary monitoring briefing about the Bill, minister of justice and constitutional development Jeff Radebe said the Bill was drafted based on a South African Law Reform Commission investigation, which started in 2003, probing into the causes of trafficking in people.

The investigation identified factors such as poverty, war and political instability as some of the main causes of trafficking.

In South Africa, children are particularly vulnerable to trafficking and remain relatively unprotected from exploitation for sexual and labour purposes.

The high prevalence of HIV and Aids in South Africa is also contributing to the problem as many children live in poverty as a result of being orphaned – only increasing their vulnerability to exploitation. Internal trafficking occurs because of high unemployment and poverty.

The new Act will address the shortcomings of existing fragmented legislation, but this does not mean that South Africa has not been able to do anything about trafficking crimes.

Until now, South Africa’s judiciary system has relied on other laws such as the Sexual Offences Act, 1957; the Riotous Assemblies Act, 1956; the Immigration Act, 2002; the Basic Conditions of Employment Act, 1997; the Intimidation Act, 1982; the Domestic Violence Act, 1998; the Films and Publications Act, 1996 and the Prevention of Organised Crime Act, 1998.

Under the common law, depending on the circumstances of each case, anyone suspected of trafficking can be charged with kidnapping, common assault, assault with intent to do grievous bodily harm, extortion, attempted murder and murder.