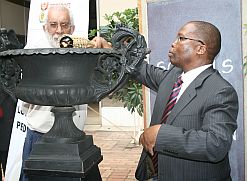 Minister of Transport S’bu Ndebele
illuminating the Torch of Light in Pretoria. 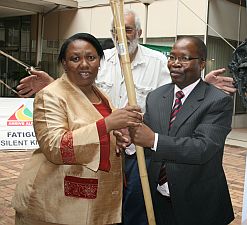 Habitually reckless drivers will soon be banned from South Africa’s roads in a bid to help reduce fatalities and promote responsible motoring.

This was Minister of Transport S’bu Ndebele’s warning as he announced the driver’s licence demerit system at an event in Pretoria on 26 January. It will come into force on 1 April.

Drivers will start on a clean slate with 12 points each year. All traffic offences – including speeding, not wearing a seatbelt, drunken driving or jumping a stop street – carry a penalty, and once caught for committing such an offence, a driver will have a set number of points knocked off his or her total.

When a driver has lost all 12 points and another one his or her licence will be suspended for a minimum of three months. Losing a further two, in other words having 14 demerits, will lead to a six-month ban.

When a driver’s licence is suspended for a third time, it will be cancelled.

The system is aimed at encouraging people to respect the rules of the road at all times and therefore reduce accidents. It forms part of the Administrative Adjudication of Road Traffic Offences (Aarto) Act, which was approved by Parliament in 1998.

“Aarto is about changing the behaviour of South African drivers. Habitual offenders may even find themselves being deprived of the convenience of driving a car,” Ndebele said.

“If you want to continue driving a car, you must behave responsibly and considerately. If you don’t, we will take away your driving licence.”

The system does not exempt offenders from having to pay fines and, in extreme cases, undergo arrest. For example, someone caught driving 115km/h in a 60km/h zone will be fined R1 250 (about US$165) and get four demerits. Those who drive more than 35km/h over the legal speed limit will be arrested immediately.

Responsible drivers, however, will be rewarded. If someone keeps all 12 points during the year he or she will kick off the new year with an additional 12 points plus a bonus point, leading to a total of 25 points.

The system has drastically reduced fatalities in countries such as Australia and England over the years, Ndebele noted. “If you go to Australia, if you go to England, [you will see] it has changed the behaviour of drivers. That’s what will happen in South Africa.”

At the same event Ndebele announced that the country recorded a total of 1 582 road deaths in its nine provinces between 1 December and 11 January. These figures are noted and discussed annually in an ongoing effort to curb the number of fatalities, which always swell due to heavy traffic during the festive and summer holiday season.

Reducing the burden on courts

Aarto, which has been allocated R300-million ($39.5-million) to implement, will also help reduce the burden on South Africa’s courts as traffic offences will now be handled within the department under the stewardship of the Road Traffic Infringement Agency. Offenders, however, will still have the option of taking the matter to court to appeal against the rulings.

Ndebele said court rolls across the country are currently clogged by traffic charges, and because these take so long to be heard, “the lawlessness on our roads is exacerbated further”.

“The implementation of [Aarto] will relieve the burden from the court system and allow the courts to focus on more urgent matters,” Ndebele said. “It will also contribute to more effective and efficient finalisation of road traffic cases.”

Taking dangerous drivers off the roads will also have a positive impact on South Africa’s economy as every year the country’s Road Accident Fund spends millions compensating people who have been involved in accidents, Ndebele pointed out.

Helping youngsters get their licences

Ndebele also announced that government will soon include road safety education in South Africa’s school curriculum. With the help of government, pupils in Grade 11 will be able to get their learner licences and by the time they complete matric they will have their full driver’s licenses.

“We will mobilise our learners to come forward for this exciting programme,” said Basic Education Minister Angie Motshekga. “As we teach them to respect the rules of the road they will become responsible drivers.”

Promise of safe roads during the World Cup

Ndebele has promised 2010 Fifa World Cup visitors to South Africa that they will be safe on the country’s roads. During all major sporting events that South Africa has hosted – including the 1995 Rugby World Cup and last year’s Fifa Confederations Cup and Indian Premier League – only one fatal accident involving a visitor was reported, the minister said.

“South Africa has never had as many visitors and road users as we will experience during the 2010 Fifa World Cup. Our obligation is to ensure that all those who use our roads are able to do so safely.

“During both international and local events South African road users generally behave well and no major road crashes have been reported. We want to commend them for this and urge them to keep this record,” said Ndebele.