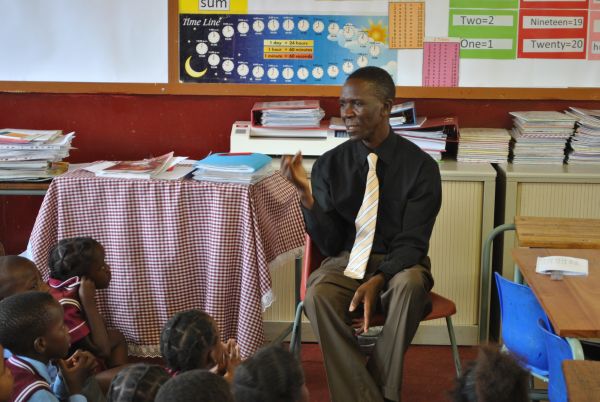 “Education opens doors for everyone. My background is proof of that.” Dr. Fannie Sebolela (Image: Sulaiman Philip)

The intense fragrance of the blossoming hook trees is the first sensory experience you have at Khensani Primary School in Soshanguve. Towering over the roofs of the classrooms, which are clustered around a garden, the soft green leaves and creamy white flowers throw a mosaic of shadows across the courtyard.

A pupil, no older than seven, darts through the garden, hops on to a walkway and heads towards a classroom. From inside, a cheery song of multiplication tables can be heard, the children’s sing-song voices flowing across the grounds. As he is about to reach the safety of his classroom, the pupil is brought up short by a familiar voice.

“Tuck your shirt in and wipe the dust off your shoes,” Dr Fannie Sebolela, the school’s principal, demands in Tswana. Even in the airless heat Sebolela’s tie lies snug against his throat. Minutes later the newly neat pupil skips off into his classroom.

Being kind and supportive, yet exacting, has helped Sebolela turn around Khensani Primary from a failing school with dropping enrolment into a model facility with applications far outstripping the places available. Today, it is the top performing school in the Tshwane District and one of the best government schools in the country. His determination to change the lives of the children at Khensani has landed him the Teacher of the Year Award twice. This year, again, he is the Gauteng representative for the national award.

“We see our success even affecting Soshanguve High School. Our children are channelled into the mathematics programme and I get calls from the principal praising their work ethic. Last year, four Khensani kids were among the top matriculants in the province.”

When Sebolela arrived at Khensani in 1999, it was two rundown blocks of 10 classrooms with ceilings caving in, plumbing that continually backed up and fields of dry dust. A lean man who speaks in measured tones, the first thing he set about doing was rebuilding the school’s relationship with the community.

“Some people called it a bribe but for me it was a way to motivate parents to become involved in upgrading the school. We planted a garden to provide fresh vegetables to the community. We went from 10 parents at the first meeting to where parents were volunteering to help clean the school.”

Discipline with dignity describes Sebolela’s teaching philosophy. In a community where most of the households barely survive he sees his school as an oasis. He began with a measured enforcement of rules, especially where it came to school uniforms. He demanded that each child, no matter their circumstances, be dressed in a full uniform. For the poorest of his students, he went out and found sponsors to donate clothing.

“We remind them that their minds are not disadvantaged or deprived, and the more time they spend focused today the easier the future becomes. I tell the children that your circumstances must not define who you become, take pride in what you are capable of. Education is the key that will open doors.”

Sebolela strides around his school grounds pointing out the improvements that have been made. The Department of Basic Education has more challenges than it has resources, he says, but that should not stop an enterprising principal from going out to look for solutions on his own. With help from corporate sponsors – BMW, Dole and Safmarine have been the biggest benefactors – Sebolela has managed to build a new library, a computer centre that is open to the community, new classrooms, and the vegetable gardens for the benefit of the neighbourhood. 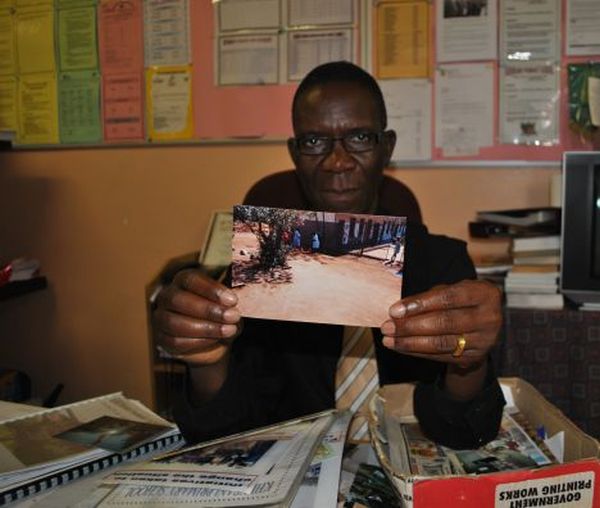 “We use the memory of our past to improve our present” Dr. Fannie Sebolela (Image: Sulaiman Philip)

Value of partnerships
He sees himself as the chief executive of the school, someone who does not have the luxury of folding his arms and waiting for problems to be solved by somebody in an office far away. “I want to change the lives of my children so I can’t fold my arms and cry. We never ask for donations; we want partnerships. People are eager to help if you can show that you are making a difference. Our partners share our goal of providing the best education.”

Everyone grows up watching teachers teach, and assumes that it’s a simple, easily learnt task, but teaching is an extremely difficult skill to master, Sebolela says. Teachers coming out of university are not ready to stand in front of a classroom, he argues, but as is his nature he is helping those who want to be helped. He mentors young educators and tutors experienced teachers on Saturdays.

Sebolela jokes that he has not had a weekend off since he was 16 so it’s not much of a sacrifice. Back then, he gave up his weekends to work as a gardener in his hometown of Mabopane to supplement his mother’s income. “I worked for a Mr De Klerk who constantly urged me to dream bigger. He would say ‘Aangaan, aangaan, leer‘ (go on, go on, study). He even offered to pay for me to study further.”

He received his Primary Teachers Certificate in 1979 then, as he jokes, he went on – and he was the best BA and honours student at the University of Pretoria. Sebolela has published a Tswana-English dictionary and is the author of the maths workbook for Grade 3. The only way to get children to achieve great things, he points out, is to have teachers who inspire through achievement. Most of his teachers live in the community, and are encouraged to come in early and to stay late.

“Education is meaningless if you don’t give back to your community,” he says, candidly. Sitting on the child-sized bus bench on the tarred section of the school grounds used to teach road safety, he raises his head to the sun. His eyes closed, he is silent, listening to the noises of learning coming from the classrooms. “When I started teaching principals wanted me posted to their schools because I was such a hard worker. I coached gymnastics, I was a choirmaster, I pushed myself because all I ever wanted to be was a teacher. That dedication is what I demand from my staff as well.”