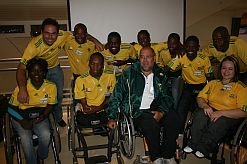 Desmond Monyamane has confidence in
his teammates. 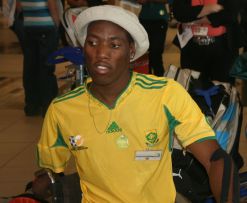 Lucas Sithole is using the tournament as
part of his preparations for the 2012
Paralympics.(Images: Bongani Nkosi)

’s wheelchair tennis stars are preparing for the upcoming 2010 Invacare World Team Cup in , and judging by their top rankings, they look set to play a dominant role the competition.

The country will be represented at the international tournament, which runs from 3 to 9 May, by a team of nine players, who will compete in all four divisions: men, women, quad and juniors.

About 300 of the “most talented” players from 33 countries will play in the 26th World Team Cup, according to Wheelchair Tennis South Africa (WTSA). The tournament is generally known as the Davis Cup of wheelchair tennis. All participants are missing – or cannot use – one or more of their limbs.

’s squad boasts the country’s most highly rated wheelchair-bound players in all divisions. “Our 2010 team is the strongest yet, and our hopes are high for the players performances to be worthy of bringing honour to our country,” said Holger Losch, who represents WTSA and is one of the team’s coaches.

The country’s top-ranked Sydwell Mathonsi, from in , will lead the men’s team. Evans Maripa, who won gold at the Asia Pacific Youth Para Games in 2009, ’s Patrick Selepe, and Desmond Monyamane, from in Polokwane, will complete this side.

“We’re looking at improving ’s ranking at the tournament,” said Monyamane, a third-year biokinetics student at the .

Monyamane started playing tennis in Limpopo in 2006, at the for youngsters with disabilities. He’s confident about his side and the South African team. “We can beat the tops teams because we have good players,” he said. “Sydwell won against a top player from the [recently].”

Kgothatso Montjane, who’s currently number-one in ’s female division and 16th in the world, will lead the women’s side. She recently won the women’s title at the SA Open for wheelchair tennis, beating Louise Hunt from the .

Montjane is hoping to help her team improve on last year’s performance, which saw them reach the quarter-finals. “We’re playing top players … but we’re well prepared for a win,” she said.

Montjane will team up with Rose van der Meer, with whom she played in last year’s World Cup, and Refilwe Mooketsi, a first-time participant who WTSA describes as a “strong and fast competitor”.

“We’re a stronger women’s team, Van der Meer said. “We are a good team, with a positive attitude.”

The quad team comprises Lucas Sithole, number-one in the South African rankings and 16th in the world, and Steven Kekai, 33rd in the world rankings. There’s a massive focus on these two stars “to see how they fare against the top seven quad nations in the world”, WTSA said.

Sithole said he’s using the week-long tournament to help prepare for the 2012 Paralympics in . The young player, who trains at the , is positive about his first qualification for the games. “I’m sure I will qualify,” he said.

Patrick Selepe, from Soshanguve in , completes the national team as both a coach and men’s singles player. 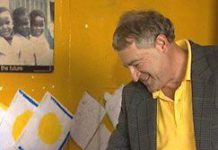 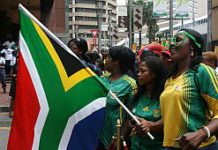