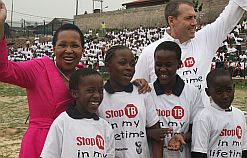 The new global TB plan was launched in
Pholoshong Primary School in Alexandra. 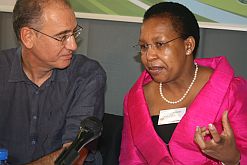 The partnership’s Rifat Atun and Gauteng
Health MEC Qedani Mahlangu at the launch. 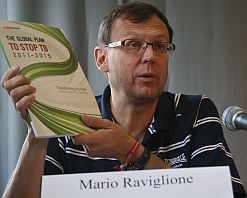 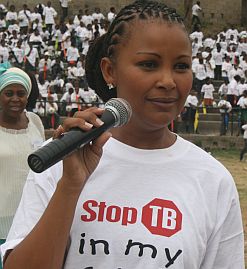 The fight against TB has been re-energised in South Africa and around the world with a new campaign launched recently in Johannesburg.

International leaders of the Stop TB Partnership launched the “Global Plan to Stop TB 2011-2015” in Alexandra, the densely populated township in the north of Johannesburg, on 13 October 2010.

Although there is an existing global TB plan in place, launched in 2006 and due to expire in 2015, the most recent campaign is meant to add new vigour to it, focusing on “setting new and more ambitious treatment targets for the next five years”.

The new drive is about “putting a platform in place” for the facilitation of global efforts meant to eradicate TB, said Stop TB Partnership executive director Rifat Atun.

The partnership is hoping to raise US$46.7-billion (R316-billion) for various global TB-fighting initiatives between 2011 and 2015.

Although billions of US dollars have already been raised, more money is needed to treat the 30-million TB patients across the world, Atun said.

According to the partnership, 10-million people in the world run the risk of dying from TB in the next five years. This includes 4-million women and children. “We need to stop these unnecessary deaths,” he said.

“This plan will take us further towards universal access” of TB care, Atun said. “TB is curable – it’s unacceptable that it still remains a worldwide scourge.”

It takes six months or slightly more to cure TB if a patient completes his or her treatment – a point the South African health department has been emphasising to its patients.

The plan “will impact everyone in the world”, said the partnership’s Judith Mandelbaum-Schmid.

The funds raised by the initiative will go towards beefing up TB care and vaccine research.

There is still no vaccine that prevents pulmonary TB, which is the most common form of the disease, according to the partnership. But “if we execute this plan, we’ll be able to produce at least four vaccines”, Atun said.

Many countries still rely on the outdated diagnostic method of testing human sputum for bacteria. Part of the plan is that new, hi-tech methods will be investigated over the next five years.

Private and public sector investments will be critical for the plan’s success.

Corporates have been urged to invest in the plan. John Tedstrom, the president of the Global Business Coalition on HIV/Aids, gave assurance that international groups such as Chevrolet will be involved in new investments for vaccine research.

“Business will be part of the solution,” said Tedstrom. “The re-launch of this plan is something that’s desperately needed.”

UN health agencies, the World Health Organisation (WHO) and UNAids, firmly support the new strategy. Their senior officers attended the launch in Alexandra, where they publicly endorsed it.

UNAids’ deputy director Paul De Lay said the agency “stands strongly behind the plan”. “We’ll do everything in our power to ensure that this plan is implemented.”

Because HIV weakens the immune system, affected individuals are most susceptible to TB, which attacks as an opportunistic disease. De Lay decried the “terrible link” between TB and HIV/Aids at the launch.

The new plan has been endorsed by various international role-players, said WHO’s Dr Mario Raviglione. “It is telling the world what needs to be done and how much money is needed to stop TB.

“WHO is fully committed to supporting this plan,” said Raviglione.

For those living with TB and HIV this “global plan means hope”, said Carol Nawina Nyirenda, who represents affected communities throughout Africa.

Although South Africa has one of the highest TB rates in the world, the country is making progress in eliminating the disease, said Qedani Mahlangu, MEC of Health and Social Development in Gauteng.

In the last year Gauteng, the country’s smallest yet most populated province, has achieved an 82% TB cure rate among patients on treatment.

The national HIV Counselling and Testing policy, introduced by the government in April, integrates testing for both HIV and TB, and for diseases such as diabetes. The Gauteng provincial government reported that by July this year more than 300 000 people had been tested.

“We’re delighted to have the global plan launched in South Africa … especially in Alexandra,” Mahlangu said.

“TB is a global problem and it requires a global solution,” Atun said.