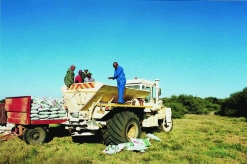 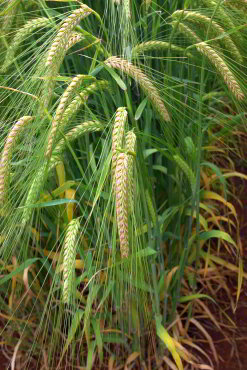 Barley is one of the crops cultivated
for SAB under the Taung farming project.
(Image: Johan Norval)

A developing farmer project in Taung in the Northern Cape province has done the country proud by receiving top honours at the first Africa Investor Agribusiness Investment Awards, held recently in KwaZulu-Natal.

Azure Janneker of SAB’s Media and Communications division says that the project met the judging criteria for the 2010 awards, even though it came up against tough competition from the rest of the continent.

The aim of the awards was to commend agribusiness initiatives that are making a positive contribution to Africa’s agricultural sector and are encouraging investment in the agribusiness and finance sectors.

The Agribusiness Investment Awards was organised by Africa Investor, an international investment research and communications company.

Janneker says the 16-year-old Taung Barley Farmers project was established with the goal of encouraging local barley production and decrease reliance on imports.

“The project is in line with SAB’s strong support of affirmative procurement practices and the company’s focus on identifying, mentoring and encouraging local suppliers,” she says.

Approximately 1 200 hectares of barley and 800 hectares of maize are cultivated for SAB on the Taung farm. The project is making a big difference in the Taung community by helping 120 small-scale farmers to generate an income from farming.

“This project has played a key role in developing the brewing giant’s development framework for smallholder farming projects across the world,” Janneker says.

The project is managed by the SAB Maltings’ Irrigation Agricultural Services team, in cooperation with the North West Department of Agriculture, Conservation, Environment and Rural Development (Dacerd) and the local tribal authority.

SAB’s role in the project includes: assisting with logistics and operations; communicating and facilitating discussions on behalf of the farmers with other stakeholders; and providing a market outlet for the barley and maize. It also supplies more than R30 million input cost finance annually, for winter and summer crops.

Janneker says that the project’s success is based on the involvement of numerous partners. SAB works closely with Dacerd, whose participation has ensured that the project remains sustainable, as plantings are managed and infrastructure is maintained and upgraded.

They have also enlisted the help of Grain SA, the representative commodity organisation for the South African grain industry.

“It is important from a sustainability perspective that the individual farmers are skilled in farming and business practices,” she says. SAB, in partnership with Grain SA, has invested about R400 000 in a customised skills transfer programme for the Taung farmers.

Jane McPherson, manager of Farmer Development at Grain SA, says the main aim of the programme is to empower individuals to become successful commercial farmers. McPherson says the Taung barley project has an added advantage, as the farm is well located in a prime area.

“Irrigated land is very limited in South Africa. The land is a fantastic resource for people to earn a living and it is encouraging that the land is being used productively,” she says.

The weather and soil conditions also make the area suitable for a wide variety of grain crops and vegetables. “This opens up many opportunities for individuals to become successful commercial farmers,” she says.

According to Grain SA, a number of factors are holding back progress of development initiatives in the grain industry. They include high input costs coupled with low grain prices, poor access to land, lack of experience, skills and knowledge, and difficulty in obtaining production credit, and make it difficult for new farmers to set up profitable grain farming enterprises.

Lower profit margins also mean that farmers don’t have the financial resources to invest in technology and mechanisation, or maintain existing equipment.

Although the constraints are numerous, there are many success stories of farmers who started out with little knowledge about agriculture, but are now farming commercially.

“The developing farmer sector is showing progress, mainly because of their involvement. It is in our best interest to develop new farmers across the commodity spectrum, to ensure the consistent supply of food,” Möller says.

He encourages the government to offer more support to the work done by commodity organisations. “In doing this we can make an even greater success of supporting and developing new farmers,” he says.

SAB and the River Trust have entered into a partnership to clean up the Wilge River in the small town of Frankfort in the Free State province. SAB has invested about R1-million towards cleaning the river.

Clearing the Wilge River is very important for the surrounding towns and communities, as well as residents of Gauteng. The Wilge River is one of the sources feeding into the Vaal dam, which supplies water to Gauteng province.

It’s also a source of water for domestic use for Frankfort and informal settlements in the area. More than 57 000 people living in the immediate Mafube municipal district rely on the Wilge River for water. However, 10 years of debris and driftwood, mainly from trees, shrubs and other plant life growing on the riverbanks, have collected in the river stream. This is restricting water flow and preventing water from being pumped to the municipal purification plant.

The project, which has the ambitious target of clearing the 315km river, has already cleared about 10km. Instead of discarding the debris, the collected wood is distributed to communities in the area for cooking and heating purposes.

The project partners also hope to revive tourism in the affected area. As congestion of the river escalated over the years, tourism started dwindling in areas along the river that used to be popular weekend and camping spots.

The good work of the project has attracted much attention. The South African Sport Confederation and Olympic Committee has adopted the project, and plans to present it to the African Olympic Committee in Nairobi towards the end of 2010, as an example of how sport and sporting personalities can become involved in environmental projects.