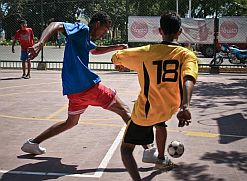 More than 70 teenagers from various
countries are gathered in Durban to
play football. 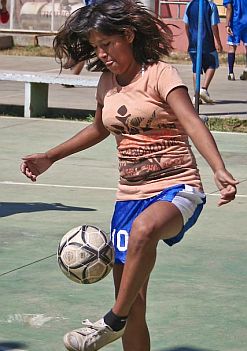 More than 70 homeless teenagers from across the world have been given a chance to flex their football skills in Durban, South Africa, in the inaugural Deloitte Street Child World Cup.

The week-long tournament, which kicked off at the Durban University of Technology on 15 March, features a series of seven-a-side indoor matches between street children from South Africa, Tanzania, Nicaragua, Brazil, Ukraine, India, Vietnam, the UK and Philippines.

The teams are mixed, with boys and girls playing together, and the winning squad will take home an impressive trophy.

Opening group stage matches have already created fireworks: in one game the South African team, represented by the Umthombo Football Club, beat Ukraine 4-1, while the skilful Brazilians were defeated by the indefatigable Tanzanian squad 2-0 in another.

The tournament was initiated by UK human rights organisation Amos Trust. Umthombo, an NGO working with street children in Durban, KwaZulu-Natal, is facilitating it.

Events like these are a good way to reach out to children living on the streets, said Umthombo CEO Tom Hewitt. “The tournament is fantastic. It celebrates the potential of street children.”

Hewitt has been impressed by the participants’ talent so far. “Nicaragua is not known for football, but those children playing in the competition are quite incredible,” Hewitt said. “The Brazilian team is also fantastic … people are excited for it.”

The youngsters are thrilled to be taking part in such a competition, he added. They received a warm welcome when they arrived in Durban, with locals staging a traditional Zulu-style carnival for them.

The Street Child World Cup is meant to, among other things, create a platform for the youngsters to share experiences of their respective countries, said Joe Hewitt, the tournament’s head of media.

The plan is to hold future street child games in countries hosting major sporting events, such as world cups and the Olympics. It’s fitting that the inaugural tournament is staged in South Africa in 2010 to coincide with the Fifa World Cup here.

“The Fifa World Cup is something that should be for all. These children should be involved in it in some way,” said Joe Hewitt. They should be given a special opportunity to be involved as flag bearers and ball crew members, he added.

“The Deloitte Street Child World Cup demonstrates the tremendous potential of every single child, and especially street children, who are so often treated as less than human,” said Archbishop Emeritus Desmond Tutu in a statement. “I am proud that the first ever Street Child World Cup will take place in South Africa …”

“I am delighted that the first Street Child World Cup will take place in South Africa where I know there is a huge passion for football. No child should have to live on the streets and I fully endorse this campaign giving street children a voice to claim their rights,” said Ferguson, who has visited South Africa a number of times with his team to play Soweto giants Kaizer Chiefs and Orlando Pirates in the annual Vodacom Challenge tournament.

Umthombo, formerly known as the Durban Street Team, has been working on the streets of the coastal city since 1998. The organisation runs various projects to help homeless children – these include a mobile health clinic, mentoring schemes and a community reintegration programme.

The organisation does not believe in putting street children in institutions, but rather tries to reunite them with their families. Tom Hewitt said it’s been encouraging to note the growing number of children who have been returned to their homes.

“There are fewer kids on the streets of Durban this year compared to last year,” he said. “The children are able to reintegrate into family life.”

The Street Child World Cup helps remind the public that there are homeless youngsters across the world, not just in South Africa, Joe Hewitt said. “It shows that this is a global problem. There are countries bigger than South Africa that still have the problem.”

This year’s participants will also attend the Street Child World Cup Indaba in Durban from 20 to 22 March. With themes such as home, safety and health, the youngsters will shares stories and discuss future aspirations with each other.