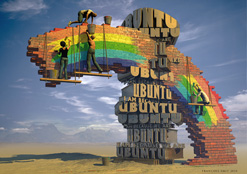 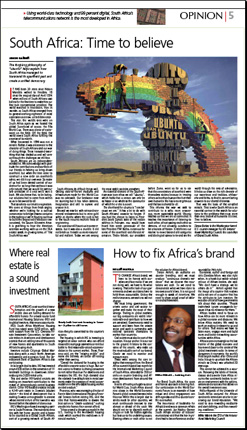 This article originally appeared on page
five of South Africa Now, a six-page
supplement to the Washington Post
produced on behalf of Brand South Africa.
(Click to enlarge.)

It has been 20 years since Nelson Mandela walked to freedom, 16 since the magical days of April 1994 when millions of South Africans cast ballots for the first time to make him our first truly representative president. The world watched in trepidation, then in wonder, as South Africa emerged from its generations-long nightmare of racial oppression as a new, united democracy.

This year, the world’s eyes were on South Africa again as we hosted the global Superbowl of soccer, the Fifa World Cup. There was plenty of excitement on the field. Off the field, the world saw a South Africa fulfilling the promise of its rebirth.

What happened in 1994 was not a miracle. Rather, it was a testament to the character of South Africans and our way of doing things. These transcend everything that has divided us and will carry us through the challenges we still face.

South Africans are an independent-minded lot. We acknowledge with gratitude the contributions and sacrifices of our friends in helping us bring down apartheid, but when the time came to construct a new order on apartheid’s ashes, we did it our own way. So many of us had been denied control of our destiny for so long that perhaps it was only natural that we would be particularly protective of it once we’d won it back. We also knew that, to be lasting, our solutions had to come from within so as to be owned by all.

That speaks to our innate pragmatism. We come at things from fresh angles, whether we’re looking for a political compromise to bridge chasms centuries in the making or we’re figuring out how the largest radio telescope ever conceived, the Square Kilometre Array. It is gratifying to hear the American scientists working with us on the SKA project speak, in glowing terms, of “the South Africa way”.

South Africans do difficult things well. Getting state-of-the-art stadiums and infrastructure ready for the World Cup was no cakewalk. Our landscape may be stunning but it has taken stamina, imagination and skill to survive and prosper in it. Blessed we may be with an extraordinary mineral endowments but to mine gold safely at depths where the rock is hot to the touch requires multiple feats of engineering. Our past may still haunt us in some respects, but it was also a crucible. It did not break us. It made us more resourceful and resilient. Today, we are among the most stable societies anywhere.

An essential element of the South African way is an ethos we call ubuntu, which holds that a person can only be as happy or as whole as the community of which he or she is a part. The shorthand for ubuntu is “I am because we are”. It has a lot to do with South Africans’ capacity to forgive. If you had the chance to listen to President Jacob Zuma’s state of the nation address in February, you would have heard him speak generously of the late President PW Botha, notorious for some of the apartheid era’s fiercest repression. Thabo Mbeki, our president before Zuma, went so far as to say that the perpetrators of apartheid were themselves victims because in treating others as less than human they lost their own humanity. No loss is more grievous and the loss is shared by all.

This informs the way we seek to contribute to a safer, more prosperous, more sustainable world. Ubuntu teaches us that we are all connected. It teaches the importance of listening to each other, of not casting each other as demons, of not allowing ourselves to be prisoners of history. It reinforces our resolve to move beyond old categories and ideological camps to try and see the world through the eyes of adversaries. It helps us draw on the rich diversity of our experience and tradition, philosophy and faiths, to find in concert lasting answers to our shared dilemmas.

That was the basis of the so-called miracle. That is why South Africa is an essential partner in the search for solutions to the problems that now, more than ever, bedevil all humanity. It’s time. Time to believe.

Simon Barber is the US country manager for the International Marketing Council, the custodian of Brand South Africa. 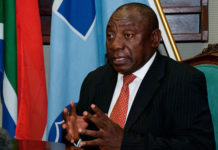