Foreign journalists on a week-long tour of the country as guests of Brand South Africa visited Boitumelo High School in Tembisa on Wednesday to find out more about the pilot project in the Gauteng Education Department’s tech-savvy Smart Schools programme. 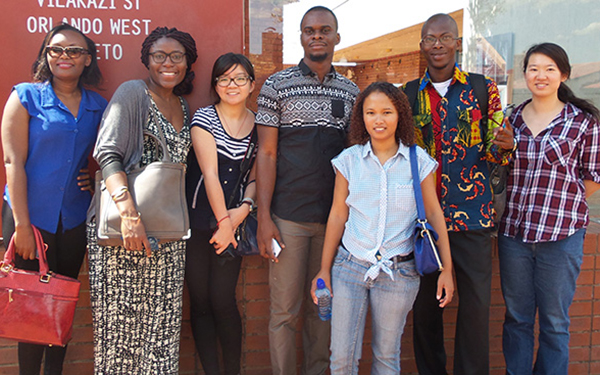 Foreign and local journalists got an insight to the Smart Schools project when they visited Tembisa during a weeklong media-tour this week.

Tablets instead of textbooks had boosted pupils’ confidence in answering their teachers’ questions, Sesi Makena, the principal of Boitumelo Secondary School, told foreign journalists visiting his school on 18 March.

The Gauteng Education Department’s mobile tech Smart Schools programme was piloted at the Tembisa high school in January this year. The visitors were invited to explore the project – and its results – with provincial education minister Panyaza Lesufi.

Local journalists have joined reporters from Kenya, Nigeria, Ghana, China and the United Kingdom on a weeklong visit to the country, as guests of Brand South Africa.

Boitumelo Secondary School, which Lesufi called “the school of the future”, was the first of seven schools on the Smart Schools programme. The education department is investing R17-billion in the programme, with R5-billion spent this year.

Although the initial roll-out was expensive, Lesufi said, the project would ultimately save money. “A textbook costs me R280, but an e-book costs me R40,” he said.

The project specifically targets township schools because tablets and iPads were seen as “gadgets for the rich”. Most of the pupils at the school and their families lived on social grants, Lesufi said. “They are not able to afford to buy these gadgets themselves.”

Joining a Grade 10 class, the MEC was anxious to start the lesson but the WiFi was off. The pupils said their biggest problem was the internet connection. “That’s why this is a pilot project so that we can find out the challenges and fix them,” said Lesufi.

Technology was used across the curriculum, and in a geography lesson, the teacher played a video on the interactive smartboard. The pupils were then able to connect to the teacher’s smartboard to give their answers to questions.

They were also keen to answer verbally, with many hands shooting into the air when the teacher asked questions. Mfanelo Patrick Ntsobi, chief director: school support, shows off the camera that is used for learners to take photo’s for their smart cards.

Lesufi said that when blackboards were used for lessons, the pupils spent much time copying the work, and were not able to respond to the teacher quickly. Now, he was delighted they were pleased with their tablets.

“Some of them have already put on their own covers. I have also seen that the learners took pictures of their family and friends and made it their screensavers.”

Parents were showing their excitement too. “In the past, about 70 came to parent meetings, but now that we have the gadgets more than a hundred come.”

The pupils would soon get 3G cards for their tablets, the MEC promised. “They will be able to have internet at their homes, but will only use it until 9pm.”

Lebohang Hanyane, who is in Grade 12 at Boitumelo Secondary School, said his tablet helped with his research. “It’s amazing that I don’t have to use my phone any more. I have also downloaded a game to refresh my mind.”

By 1 April, his department would launch Smart Schools in another 11 schools, Lesufi said. 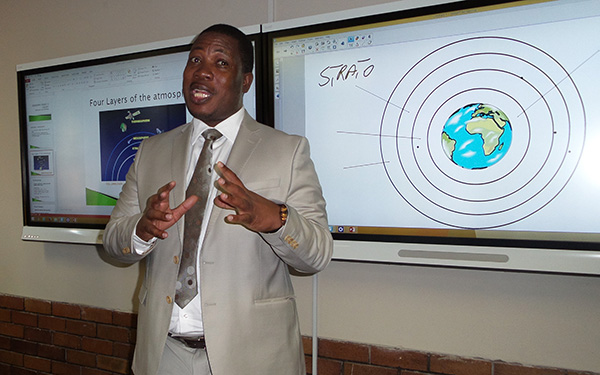 Panyaza Lesufi, MEC of Education in Gauteng, says the project will launch at 11 more township schools from April.

The media tour included a visit to iThemba LABS at Wits University, and the visitors were able to chat to an engineer about the Square Kilometre Array.