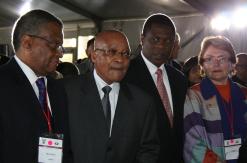 Speaker of Parliament Max Sisulu; President Jacob Zuma, Minister of Arts and Culture Paul Mashatile and DA leader Helen Zille convened at the summit to speak about an all-inclusive society that is proud and caring of one another.
(Image: Ray Maota) 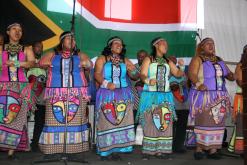 The Soweto Gospel Choir led delegates in the singing of the national anthem.
(Image: Jenny Tennant)

South Africans have embarked on an in-depth process of deciding what kind of society they want to create – and a major part of that process is the National Social Cohesion Summit which took place recently at the Walter Sisulu Square of Dedication in Kliptown, Soweto.

Some 3 000 delegates joined President Jacob Zuma, summit host arts and culture minister Paul Mashatile, members of the cabinet, MPs, and representatives from the various political parties and civil society bodies, to come up with a declaration of what needs to be done to create a caring and proud society.

The summit took place on 4 and 5 July 2012, and featured discussions on the role of organs of state such as the judiciary, Parliament and other legislative bodies and political parties, as well as the role of civil society, including business and labour, and other NGOs such as the Foundation for Human Rights, Molo Songololo and Lead SA.

The summit, Mashatile said, aimed to “carve a shared destiny that the country belongs to all who live in it”, deepening the development that has been taking place since the advent of democracy 18 years ago.

Under the theme Working together to create a caring and proud society, delegates decided on the steps to take to lead to a society where, despite differences, South African-ness comes first.

“We must use our diversity to compel us to a common future,” Mashatile added.

Not only a talk shop

The National Social Cohesion Summit is not a talk shop, but must bring about something tangible to work towards.

In his opening speech, Zuma noted that the summit was “a crucial dialogue” where people had come together “to bring to life what our forebears left for us as a legacy” – that the country belongs to all.

All the speakers emphasised that the summit’s theme reflected on South Africa’s history of selflessness, as well as the vision of the leaders in the democratic movement, in burying apartheid and building a new society.

South Africans, Zuma said, are unique, “a people with an inspiring history” who do not hesitate to tackle difficulties and challenges.

“We are going to try and find a way to live together in peace and harmony, building a united nation,” he said.

This summit looked at how best to bring about a cohesive, democratic and prosperous society. In mapping the direction, cognisance has to be taken of the challenges of poverty, unemployment, inequality, homelessness, landlessness and divisions of race, class and gender.

At the end of the two-day gathering a declaration was drawn up – a living document with guidelines and outcomes.

Delegates came from all walks of life, from across the country – and the choice of venue was no coincidence. Speaker after speaker referred to the Freedom Charter, the original road map to democracy that was drawn up on that very spot in 1955.

South Africa’s Constitution strongly echoes the points drawn up in the Charter, and its preamble picks up the founding principles of that significant declaration: “We, the people of South Africa, recognise the injustices of our past; honour those who suffered for justice and freedom in our land; respect those who have worked to build and develop our country; and believe that South Africa belongs to all who live in it, united in our diversity.”

Now, almost two decades into a democratic state, is the time to reflect on these foundations and forge a future where all South Africans can call this country “home”.

According to the Department of Arts and Culture, social cohesion and nation building can only be based on the following principles: constitution and democracy; human rights and equality; non-racialism, non-tribalism and non-sexism; unity in diversity; inclusivity and social justice; redress and transformation; intergroup and community co-operation; social solidarity; active citizenship; civic responsibility; and national consciousness.

“These principles serve as the touchstone of social cohesion and are aimed at fostering shared values and greater cohesion within diverse communities and national unity between them and across the country,” said Mashatile.

ANC secretary-general Gwede Mantashe said: “As a country we should make sure of the independence of the three pillars of the state – the judiciary, legislature and executive – and that of the media is upheld.”

“We should make policies that strengthen society and give youngsters the opportunity to work and develop the country into what they want it to be,” said Zille.