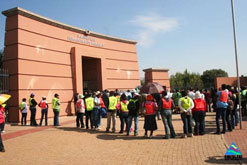 A gathering at the Sharpeville Memorial
in the Gauteng township to pay tribute to
those who died in the violence..
(Image: Emfuleni local municipality)

On 21 March, Human Rights Day, remembered the Sharpeville massacre of 50 years ago, when police clashed with crowds protesting against unjust apartheid laws. Sixty-nine people were killed and close to 200 injured in the demonstrations.

The watershed event was commemorated peacefully, in stark contrast to the bloody confrontation of the day.

This year about 5 000 people came together in Sharpeville, a township near Vereeniging about 50km south of Johannesburg, to pay tribute to those who gave their lives for the country’s liberation struggle. Of the 69 who died, 10 were children and eight were women, and all were unarmed.

As the horrific events at Sharpeville were unfolding, protesters in the Western Cape’s Langa township, some 1 600km away, also came under police fire and tear gas assault, and two people were left dead.

The government retaliated by declaring its first State of and banning the African National Congress (ANC) and Pan Africanist Congress (PAC). This fateful decision led to the ANC taking up arms against apartheid through its military wing, Umkhonto we Sizwe.

Deputy President Kgalema Motlanthe was present at the commemoration, which took place under the theme “Working together we can do more to protect human rights”. He attended a service at the local Catholic church and laid wreaths on the graves of Sharpeville victims during a hymn service.

“The Sharpeville and Langa massacres were a tipping point in that they triggered revulsion and disgust locally and internationally,” said Motlanthe, revisiting the events of 50 years ago. “The government of the day responded by banning the ANC and PAC and this precipitated the end of the non-violent struggle and brought to bear an advent of the armed struggle by the liberation movement.”

Motlanthe also pointed out that demonstrations of that time were peaceful and that people didn’t set out to loot shops or burn cars, unlike the protesters of today who seem to think nothing of destroying private and public property.

He urged those with grievances to use the democratic channels available to them, and to voice their protests without resorting to violence.

Like 50 years ago, many members of today’s Sharpeville community are poverty-stricken and dissatisfied, and protests against poor service delivery are a part of life.

“To adequately commemorate the victims and survivors of the Sharpeville massacre and other bloodbaths, we must ensure the progressive realisation of the socio-economic rights as envisaged in the Bill of Rights,” said Motlanthe, adding that government and its social partners must work harder to improve the quality of life of all South Africans, by providing shelter, basic amenities, education, and security.

Nationwide protests against the pass

Although the apartheid system would not fall for another 30 years, the tragedy at Sharpeville was the beginning of its demise. International condemnation was swift and severe and led to disinvestment from South Africa, the country’s global isolation and eventually, the end of the Nationalist apartheid regime.

The Nationalist government, during its reign, had imposed ludicrous laws and restrictions on black people, intended to control their movements and isolate them from fellow South Africans of other races. One of these was the stipulation that black people working away from their homes, mostly in white areas, had to carry a pass book.

The pass law was enacted in the early part of the 20th century, but was most visibly and cruelly enforced during the tenure of the apartheid government, which came to power in 1948.

The pass was a type of identification document that carried the personal information of its bearer, including their name, photograph, address, fingerprints, criminal and tax records, and name of employer. In essence, the pass showed that they had permission to move about in white areas. Under the law of the time, an employer could only be a white person, and he or she sometimes entered an evaluation of the employee into the pass book.

The pass laws at first applied only to men, but before long they were extended to include women. Travelling to other areas without a pass book was a huge risk, because of the possibility of arrest and imprisonment.

This was a degrading experience for black people, and understandably it was met with great resistance. Both men and women rebelled, leading to ongoing demonstrations and many thousands of arrests.

The ANC-led Defiance Campaign against unjust laws was launched in 1952, in collaboration with the party’s ally, the South African Indian Congress, with whom it had signed a pact of mutual support in 1947. The idea here was that people would deliberately break the pass laws and then give themselves up to the police, in the hopes that cells would become crowded and the police system overloaded. All race groups were involved.

The campaign didn’t have the desired effect, and the ANC decided to draft an entirely new Constitution for . This led to the adoption of the Freedom Charter in 1956, which was outlawed by the government as part of a plot to replace it with a communist state. Government action led to the arrest of 158 activists, and the subsequent Treason Trial.

In August of that same year a group of 20 000 feisty women marched on the Union Buildings, the seat of the government, in . Singing the now-famous struggle song “Wathint’ abafazi, wathint’ imbokodo!” (Zulu, meaning “strike the women, strike the rock”) they showed their outrage at the pass laws. The event is now remembered on 9 August, South Africa’s National Women’s Day.

However, all this strife was like a simmering cauldron about to boil over, and in 1960 that is exactly what happened. The PAC, a newly formed breakaway group of the ANC, demonstrated on 21 March of that year in Sharpeville under the leadership of the charismatic Robert Sobukwe.

The PAC and ANC had been vying for support from the people, and the PAC got wind of an ANC anti-pass march, scheduled for 31 March. The former decided to strike first and planned their march for 10 days earlier.

Sobukwe led a contingent of PAC comrades in a march on the police station at , . Here he admitted guilt to being in an area other than what was stipulated in his pass book, and offered himself up for arrest. He was sentenced to three years in jail but when his term was up, at the discretion of the justice minister his imprisonment was renewed on an annual basis for a further three years. This was the controversial so-called Sobukwe Clause, implemented as Article Four of the General Law Amendment Act of 1963.

At the same time, at various spots around the country, and particularly in the Gauteng township of Sharpeville, about 50km south of Johannesburg, marchers were preparing to descend on police stations and hand themselves over in a repeat of Sobukwe’s actions, or for not carrying their pass books at all.

At the sight of the thousands of marchers, police in Sharpeville panicked and shot into the crowd. They were reportedly on edge because of the killing of nine police members in Cato Ridge, KwaZulu-Natal, just a few weeks before. The police later claimed to have been attacked first by stone-throwers, but as many of the wounded were shot in the back, this claim is refuted.

The Truth and Reconciliation Commission, set up in 1995 to investigate atrocities committed on both sides during the apartheid years, found that police actions were the cause of the massacre.

“The Commission finds that the police deliberately opened fire on an unarmed crowd that had gathered peacefully at Sharpeville on 21 March 1960 to protest against the pass laws,” said its 1998 report.

The despised pass laws were eventually repealed in 1986 under the leadership of the late state president Pieter Willem (PW) Botha.

Today Sharpeville is also remembered as the place where former president Nelson Mandela signed the new Constitution in December 1996. The document came into force in February 1997. 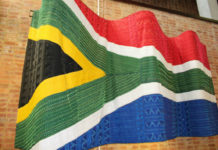