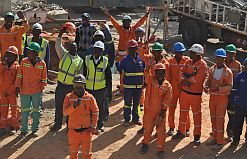 The Department of Transport unveiled its S’hamba Sonke (moving together) programme on 1 April, which aims to improve public roads across the country. Thousands will be employed between 2011 and 2014 to fix potholes and generally upgrade and maintain roads infrastructure.

“We are going to improve access to schools, clinics and other social and economic opportunities by drastically upgrading our secondary road network and fixing and repairing potholes throughout the country,” said Ndebele.

S’hamba Sonke requires co-operation between the national Department of Transport, provinces and municipalities, with funding coming from the national level.

Emerging contractors will benefit immensely from the new scheme. In turn, they have a responsibility to employ sizeable numbers of workers.

Most of the jobs created via S’hamba Sonke are likely to be temporary.  But Ndebele promised in Parliament that they will not be “piece jobs” that last for just two days or a few weeks.

S’hamba Sonke presents the government’s first national drive to close down potholes on many roads in the country.

Motorists will now be able to report potholes to the government via a new hotline, which is yet to be announced. This form of communication will allow S’hamba Sonke workers to spring into action as soon as potholes emerge.

A campaign started by Lead SA, a public movement campaigning for good government, resulted in about 10 000 potholes on Johannesburg’s roads being fixed between August 2010 and March 2011.

The biggest government-funded road rehabilitation projects in South Africa at the moment are in the North West province, where the reconstruction of several roads in and between the towns of Mahikeng and Mmabatho started earnestly in March.

The provincial government announced a R33-million public investment into revitalising the towns’ roads in a three month project that will create some 250 jobs.

Construction of the first tarred road between the villages of Ganyesa and Tlakgameng got underway in March. The 38 kilometres single carriageway is being built for R218.6 million and has secured jobs for more than 100 locals.

* At the time of publishing the South African Rand was R6.69 to the US Dollar