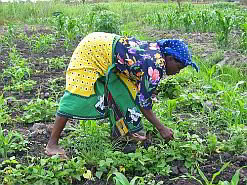 South African women from disadvantaged areas are using their backyards to grow crops and farm livestock in order to feed their families and the community.

Getrude Ramashitsa wakes up early every morning to water her carrots, spinach, tomatoes and potatoes growing in her medium-sized backyard. She picks the ones she thinks are ready and puts them in a straw basket.

“I’m proud of my garden, it’s so bright with life now that some of the crops are ripe,” she said. “I’m proud of the work I’ve done because I’m using the resources I have to empower myself while feeding the community and my family.”

Ramashitsa lives in Orange Farm, a low-income neighbourhood south of Johannesburg. She is part of a group of women there who sell produce to people in the community and supply the nearby supermarkets and restaurants.

“This is a poor community, which is vastly affected by HIV/Aids, unemployment and poverty. Farming is helping us earn a living, we are able to feed and take our children to school. We also donate vegetables to child-headed households, pensioners and those caring for the terminally ill.”

The women also source other available land in the area to help grow their farming operations. “We seek help from nearby farmers, government and church organisations, which donate seeds, tools and pesticides for us to be able to set up and sustain small-scale farming.”

Ramashitsa said several people in the community have come forward and made their land available for the women to farm. “Some people have land they have bought and are not using it, we are speaking to them about using the land to farm and so far we have had a good response.”

She said the women also go to schools and encourage the principals to get their pupils to start vegetable gardens. “Teaching children to farm is ultimately teaching them responsibility and how to fend for themselves in the future. It’s also very encouraging and will build their confidence as they see results. They can literally enjoy the fruits of their labour. ”

Sizakele Mshumayeli from Kwagomani, KwaZulu-Natal, has 10 goats, three cows and 21 chickens in a kraal at her home. She lives with her son, two daughters and four grandchildren. They all rely on her to provide for them. “I’m old now and don’t have any formal qualifications, but need to make money to take care of my kids and grandkids. I’ve worked at a farm and know a lot about farming and I have land here, so I’m using my knowledge and skills to make a living and help myself now.”

Mshumayeli said with the help of the Catholic church in the area, she was able to start farming stock, which she sells to make a living. “The church donates a pregnant goat to you. That goat gives birth to kids, which grow up to do the same. So it goes until you have a lot of them – it’s the same with the chickens and the cows.”

She said they are also encouraged to give back by making similar donations to other families in need. “When our kraal starts growing, we donate to others around us so they can also make a living.”

According to the International Fund for Agricultural Development, women in Africa produce more than 70% of the continent’s food.

Empowering women to become small-scale farmers by giving them land and stock is the best thing that government can do for people in rural areas, said Mshumayeli.

“Women produce most of the food as many of them work on farms. They help produce food for the world, yet end up hungry when it comes to providing for their families. If more of them can be assisted with resources to start farming to help themselves, it would really reduce the problem of hunger in our country.”