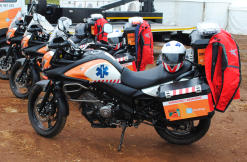 Some of the fully equipped medical response units on standby and ready for action.
(Image: Janine Erasmusi) 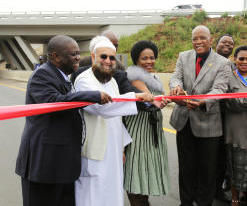 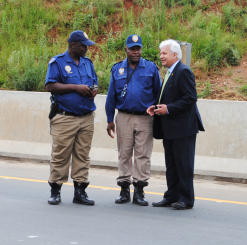 Gauteng road users, especially those who use the southern portions of the provincial network, can now drive in increased safety along one of the province’s most notorious stretches of road.

The South African National Roads Agency Limited (Sanral) has finished construction of the improved Misgund interchange on the N1 near Lenasia, some 35km south of the Johannesburg CBD. This development is expected to cut the high accident rate on that portion of the freeway, known grimly as Death Bend.

More than 80 000 drivers use the interchange every day and now, with wider lanes as well as an extra lane in each direction, and new surfaces, the flow of traffic is expected to be safer and more efficient. The local community also expects crime along the road to drop, because of better lighting and guard rails which prevent pedestrians from straying on to the road, whether by accident or to commit unlawful deeds.

Opening the interchange, Transport Minister Ben Martins said that South Africa’s upgraded roads were comparable to those found anywhere in the world, and that the challenges in infrastructure development were not unique to the country.

Gauteng’s MEC for roads and transport, Ismail Vadi, added that the upgrade was in line with the UN’s Decade of Action for Road Safety 2011-2020, to which South Africa was a signatory. The 10-year campaign aims to stabilise and eventually reduce the number of fatal traffic accidents around the world.

The Sanral on-road service is on standby all day, every day of the year. It’s controlled via Sanral’s traffic management centre and operates on the 220km of the Gauteng Freeway Improvement Project (GFIP), which currently includes portions of the N1, N3, N12 and R21 national roads.

Citizens wishing to report an incident that could affect the safety of road users or obstruct the flow of traffic, can call the control centre on 0800 487 233 or 011 312 1188. As much detail as possible, including the type of incident, its location, the number of vehicles involved, and if there are injured people, should be given.

Although the smallest, Gauteng is the busiest of the country’s provinces in terms of economic activity and business and residential development. Freeways have become overburdened as a result, which negatively affects productivity and output. Sanral’s GFIP aims to upgrade an eventual 560km of roads, easing traffic congestion and creating more direct and indirect employment and business opportunities.

There are four variations of vehicle in the emergency services squad, able to deal with most road crises: incident response units, medical response units, and light and heavy towing and recovery units.

“The ‘golden hour’ is the most critical in which lives can be saved after a serious incident,” said Martins.

With this in mind, the first to arrive at a scene will most likely be one of the six-strong fleet of medical response units – motorcycles driven by qualified paramedics carrying fully equipped medical kits. Motorcycles can navigate through traffic quickly and will be able to reach patients and provide care until an ambulance gets there.

In addition, there are six medical response vehicles to back up the bikes. The incident response units, of which there are 10, offer further support through securing the accident scene with warning signs and cones and diverting traffic, thus decreasing the possibility of a secondary accident. These nippy little bakkies (pickup vans) are each staffed with a traffic security officer and a paramedic.

“These services will not replace the existing public services, but will complement them to ensure the swift provision of emergency services to road users when they need it most,” said Martens.

All vehicles are stationed at strategic points along the freeway network to provide the quickest possible response to emergencies.