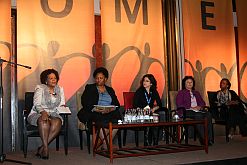 An estimated 250 women leaders attended
the inaugural Women’s Legacy Dialogue,
held at the Sandton Sun Hotel in
Johannesburg on 13 August 2010 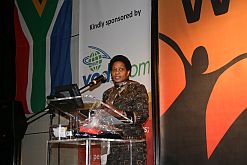 Former deputy president of the country
Phumzile Mlambo-Ngcuka was one of the
speakers at the event
(Images: Nosimilo Ramela)

Female leaders in business and politics came together at the inaugural Women’s Legacy Dialogue on 13 August 2010 to discuss ways in which South African women can bring about meaningful change in the country.

The event, held at the Sandton Sun Hotel in Johannesburg, took place in the context of Women’s Month.

Celebrated every year in August, Women’s Month pays tribute to the more than 20 000 South African women who marched to the Union Buildings on 9 August 1956 to protest against unjust pass laws, which enforced racial segregation.

Nowadays that date is a public holiday in South Africa and proclaimed “Women’s Day”.

The main aim of the dialogue – organised by Finlay Events and Promotions and sponsored by Vodacom and the Johannesburg Stock Exchange (JSE) – was to initiate discussion around the challenges facing South African women and the country in general, and help find possible solutions.

After the various speakers made their presentations, there was a panel discussion followed by a group session during which attendees debated the role of women in education; job empowerment and creation; and reducing violence. Each group then had to present three suggestions on how these can be addressed.

The points were documented and delegates voted on the most viable contributions, which will be submitted to the government.

One of the brains behind the legacy dialogue, well-known business woman Wendy Luhabe, said: “We want women to recognise that a few women can change some things, but if we all get involved, we can change everything.”

Investing time and money in education was highlighted as one of the ways of bringing about change.

“There is no tool more effective for change than educating girls,” Motshekga said.

She added that research has shown that 98% of young South Africans between the ages of seven and 15 are at school, but expressed concern over the 2% shortfall. “One child out of school is one too many, we need to find these 200 000 children who are unaccounted for.”

“South Africa is committed to transforming gender relations and to women’s empowerment,” she said. The country has a progressive Constitution that guarantees the right to education.

“The legacy we need to take from Women’s Day and Women’s Month is to recognise the best in us, and recognise good leaders, as good leadership is very important. We need to learn to take action and not let anything go wrong without us questioning it.” Motshekga said.

Lessons from the 2010 Fifa World Cup

Turning to South Africa’s recent hosting of the 2010 Fifa World Cup, Phuti Malabie, managing director of Shanduka Energy, encouraged attendees to use the legacy and momentum created by the tournament to make a difference.

“We should adopt the ’Fifa model’ which insured delivery through working together.” She said this approach could be particularly useful in helping the nation to focus on a set cause, like eradicating hunger.

Mlambo-Ngcuka shared her sentiments: “We should have a shared vision. At times we have too many priorities and we struggle to find or do one thing.”

The former deputy president said the World Cup helped the country come together and “served as example that we have the capacity to do great things”.

“These are the lessons and legacy we should carry forward with us – we must be the change we want to see.”

She added that although South Africans are afraid of making mistakes as they cost the poor dearly, “fear of failure cannot be the reason we are afraid to try”.

In closing, Newton-King emphasised the importance of expert planning and organising in bringing about change. She also encouraged the country to work together to achieve more.

“We should bottle the spirit of the World Cup and use it to achieve the common goals identified today,” she said.