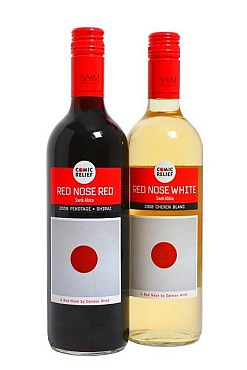 Red Nose Day 2009 in the UK, hosted by British charity organisation Comic Relief, was made extra zesty by the presence of the first ever Comic Relief Wines, produced by Saam Mountain Vineyards in South Africa.

Established in 2007, Saam (Afrikaans, meaning “together”) Vineyards represent a group of around 40 farmers in the Western Cape’s wine-growing Boland region.

The Saam vineyards stand at the foot of the Paardeberg mountain (Dutch, meaning “horse mountain”), named after the mountain zebra or quagga, which used to roam the region but is now extinct. This is a protected area, home to many species of fynbos as well as birds and game, including leopards.

Saam produced two wines for Red Nose Day – a red and a white. The red is a blend of Pinotage and Shiraz, while the white is Chenin Blanc. The wines went on sale in the UK in early 2009, with the goal of raising at least £750 000 (R9.7-million) before the main Red Nose Day event in March 2009.

Comic Relief Wines took many months to plan and was a team effort from start to finish. All involved worked hard to keep costs down and maximise the amount raised for charity.

Harvesting took place back in March 2008, after which the wine matured in the Saam cellars for some months before making the 9 600km voyage to the UK by sea, in bulk containers.

The wines were chosen for the project by Jancis Robinson and Tim Atkin, both British Masters of Wine and distinguished wine critics and writers. Their notes appear on the back of the label.

“Since this admirable organisation does so much good work in the most impoverished continent on earth,” wrote Robinson on her website, “it seemed appropriate to look to Africa, and therefore South Africa, as the source of the very first Red Nose Red and Red Nose White”.

Robinson and Atkin were full of praise for their South African selections, describing the white and red as “great tangy refreshment” and “hearty, full-bodied, brimming with goodwill”, respectively.

Saam vineyard provided the wines at cost, while beverage specialist JF Hillebrand shipped the batch to the UK at a reduced rate.

Cheshire-based Quinn Glass also offered a special rate to bottle the wines in lightweight 356g bottles, in comparison to normal wine bottles which weigh around 460g. The bottles, made on site, were clear in order to facilitate recycling in the UK. The end result was an approximate 736 000 bottles of Red Nose wine.

Controversial artist, and 1995 winner of the Turner Prize for visual art, Damien Hirst, designed the labels – a simple red dot against a grey background with the Comic Relief logo above. A handful of wine critics pointed out the similarity between Hirst’s label and that of Australian brand, Penny’s Hill, which has sported a plain red dot on its label for 13 years. However, none of the comments was taken any further.

Both Erbin, the UK company which supplied special red capsules, or wine closures, and Multiprint, which printed the labels, provided their services at cost.

Furthermore, a number of major British retailers made room on their shelves for the initiative and reduced their own profit margins. Among them were Sainsbury’s, Somerfield, Tesco, Morrisons, Marks & Spencer, and Booths.

The British public took the cause to heart, snapping up bottles of Red Nose Wine and in the process raising a record-breaking £80-million (R1.04-billion) to date.

A red nose for charity

Comic Relief works all year around to support projects in Africa, Asia, Latin America, the Caribbean and the UK. These projects tackle pressing issues such as poverty, HIV/Aids, domestic violence, conflict, and child labour.

Held every alternate spring, Red Nose Day is Comic Relief’s main fund-raiser. The event takes place in the UK and several other countries, including the US, Australia, Russia and Germany.

Every Red Nose Day the public don red plastic noses and top British comedians come together to raise awareness of poverty-related issues. The day culminates in a live telethon, combined with comedy, which is televised on BBC One and often runs into the early hours of the next morning.

Comic Relief and Red Nose Day achieved another first in 2009. The organisation set a Guinness world record by manning the biggest virtual call centre ever, with a mind-boggling 20 000 people taking pledges for Red Nose Day.

The organisation plans to spend all the money raised on Red Nose Day 2009 to support its projects in Africa and the UK. It has already used £6.3-million (R82-million) to protect more than a million Africans from malaria. Through the Malaria Consortium and the Global Fund, Comic Relief is providing anti-malarial drugs and insecticide-treated bed nets to communities in high-risk areas.