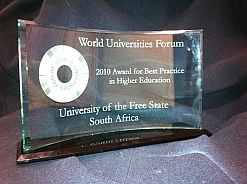 Campus-wide student integration,
reinvigorating academic culture and
nurturing the most promising young
students through the vice-chancellor’s
prestige programme are among the
innovations that earned the University of
the Free State the Best Practice in Higher
Education in 2010 award.
(Image: On the University)

The University of the Free State has been honoured with the award for Best Practice in Higher Education in 2010 for its fresh approach in promoting racial harmony and academic excellence.

The award, presented by the World Universities Forum, is based on a strict set of criteria, including innovative curriculums; quality of research projects; and student services.

The forum said the award recognised a number of positive reforms at the university over the last year following a culture of “racial division, student failure and academic stagnation”.

Campus-wide student integration, reinvigorating academic culture and nurturing the most promising young students through the vice-chancellor’s prestige programme are among the innovations made, according to university spokesperson Lacea Loader.

In the last year the university sent 71 first-year students to US universities such as Harvard to help them become non-racial leaders on campus.

It has also identified 20 of the most under-performing high schools in the Free State and is building relationships with them to help improve conditions.

“We feel that the University of the Free State’s innovations demonstrate the profound impact higher education practices can have when they are well conceived and implemented. We applaud these innovations and the ways in which they promote racial harmony, student success and overall academic vitality,” the forum said.

The university’s vice-chancellor and rector Prof Jonathan Jansen said: “We are humbled and encouraged by the recognition of academic excellence and institutional transformation that comes with this prestigious international award.”

Jansen has had his work cut out for him following an incident on campus in 2008 which made international headlines. The media storm was in response to a racially insensitive video filmed by four students belonging to the university’s Reitz residence.

The university will formally accept the award at the World Universities Forum gathering at The Hong Kong Institute of Education from 14 to 16 January 2011.

The forum was launched in Davos, Switzerland, in 2008 and meets annually at various venues around the world. It was held in Mumbai, India, in 2009 and again in Davos in 2010.

The forum focuses on matters affecting higher education, politics and the global economy. During this year’s gathering, the forum will continue the discussion on the current role and future possibilities for universities around the world, and cultural tolerance at these institutions.

“We are pleased that this discussion will include recognition of the University of the Free State and its tremendous efforts to address its own challenges,” the forum said.

Loader said this was the first such honour for the university and representatives were excited about receiving the award.