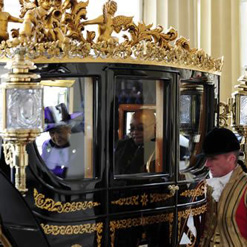 Queen Elizabeth II and South African
President Jacob Zuma ride in the royal
carrage to Buckingham Palace in the UK in
early March.
(Image: The Presidency)

Only two of the statues outside Westminster are not of British leaders, and both are South African. After President Jacob Zuma’s state visit to the UK, John Battersby reflects on the long and deep relationship between the two countries.

I was often asked in the long run-up to President Jacob Zuma’s state visit to the UK: what is the purpose of a state visit?

It is a fair question.

The amount of preparation and coordination that goes into a state visit is mind-boggling. It involves hundreds of people working continually for three months. It is expensive and time-consuming. And there are no immediate outcomes.

A state visit is a time for consolidating the long-term relationship between two countries and reflecting on what has been achieved and what can be achieved in the future through deeper collaboration, partnership and mutual support.

It brings a sense of perspective.

As Zuma noted in his closing speech on 5 March to an audience of British investors in the City of London’s Drapers Hall, the state visit would take relations between the countries to a new level.

The fact that the president was accompanied by 12 cabinet ministers and a 200-strong contingent of South African businesspeople was in itself a powerful statement about the importance South Africa attaches to its relationship with the United Kingdom.

One could not but be deeply moved by the extraordinary hospitality which the British extended to Zuma and his entourage.

From the impressive display of pomp and pageantry at the Royal Horse Guards, the ride in the carriage with the Queen, the dazzling state banquet at Buckingham Palace, the white-tie banquet for 700 people hosted by the Lord Mayor of the City of London, to the address in the Royal Robing Room at Westminster, it was an awesome spectacle.

Culture, tradition and history come to the fore in a state visit and, as a proud South African and a proud Zulu, no-one was more aware of this than Zuma, attired in his white bow-tie, white waistcoat and black jacket with tails.

As the trumpets sounded forth from either end of the historic Guildhall and the Lord Mayor’s guests engaged in the traditional slow-clapping, the mundane nature of government was transcended by a mutual celebration of the enduring relationship between the two countries and the peaks of their national achievements over the past century.

A seminal year for South Africa

It was the third state visit since South Africa’s first democratic elections in 1994: first President Nelson Mandela in 1996, President Thabo Mbeki in 2001 and now President Jacob Zuma in 2010, a seminal year for South Africa as host of the 2010 World Cup.

It is also the 16th year since the establishment of democracy in South Africa in 1994, which marked the final step on the path to nationhood after 358 years of colonial rule, the last 40 years under the notorious apartheid regime which brought the country to the brink of an apocalyptic civil war.

Zuma thanked the British people for their prominent role in hastening the end of apartheid through their active participation in the anti-apartheid movement and in providing support to the victims of apartheid.

He underscored the importance of Britain as a trade and investment partner and stressed the need to develop and expand partnerships to ensure further knowledge exchange, mentoring and training.

Zuma stressed that expanded collaboration was necessary to meeting the challenges of poverty and underdevelopment and to address the government’s five priority objectives: upgrading the health and education sectors, job creation, fighting crime and addressing rural poverty and land reform.

On the British side, the continuity of the extraordinary relationship between Britain and South Africa is embodied by the reigning British monarch, Queen Elizabeth II.

The Queen and the Duke of Edinburgh have paid two state visits to South Africa: in 1995 during the Presidency of Nelson Mandela and then again in 1999 when President Mbeki became head of state.

The Queen’s relationship with South Africa spans more than six decades beginning with her official visit as Princess Elizabeth with her parents, the King and Queen, in 1947 which lasted three months and included Zimbabwe (then Southern Rhodesia) and Botswana (then Bechuanaland).

The Queen’s personal collection of letters, photographs and memorabilia from that trip – and the subsequent state visits – were on display at Buckingham Palace for the South African delegation and invited guests to view.

It was clear from the display that her visit to South Africa was one the highpoints of her youth. She celebrated her 21st birthday during the visit. Five years later, in 1952, her father died and she was crowned as Queen of the United Kingdom at the tender age of 25.

Among the letters were those between her and General Jan Smuts, who was Prime Minister at the time. It was the year before the National Party came to power in 1948, which ushered in a dark period in relations between South Africa and the UK.

But the monarch’s relationship with Smuts, and later with Mandela, Mbeki and Zuma, has served as an arch of continuity which has preserved the growing and valuable trade, investment, cultural and historic relationship between the two countries.

As Zuma observed in his address to Westminster, nowhere is that relationship more powerfully symbolised than in Parliament Square, adjoining the Palace of Westminster, where the statues of British prime ministers spanning more than a century stand.

There are only two statues of leaders who are not British and they are both South Africans: Jan Smuts and Nelson Mandela, the only leader whose statue was erected in his own lifetime.

John Battersby is the UK country manager of the International Marketing Council of South Africa. He is a former bureau chief of the South African morning group office in London and was editor of The Sunday Independent from 1996 to 2001.