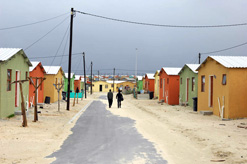 New, energy-efficient housing in the
Kuyasa settlement of Khayelitsha, Cape
Town’s sprawling township. In part of a
broader area known as the Cape Flats,
residents live on what is effectively beach
sand.
(Image: City of Cape Town)

RELATED ARTICLES
• African projects to save the earth
• Solar power lights the way
• Cape Town: a sustainable city
• Eating, earning from city farms
• Greening it up in Cape Town

As South Africans face huge hikes in their electricity bills, people living in an informal settlement on the outskirts of Cape Town have turned to the sun to provide for their heating needs in Africa’s first project registered under the Clean Development Mechanism (CDM).

The almost 2 000 families in Kuyasa, a low-income settlement that is part of the sprawling Khayelitsha township, have not only managed to cut their electricity costs by 35% a year, but are also doing their bit to reduce harmful greenhouse gas emissions.

Each solar water heater helps save around 1.29 metric tons of carbon dioxide per household per year from being emitted, which equates to the total carbon emission in a flight of some 12 200 kilometres, such as from Los Angeles in the US to Cairo, Egypt.

The CDM, set up under the UN Framework Convention on Climate Change, allows industrialised countries to meet part of their commitment to reduce greenhouse gases by investing in projects that reduce emissions in developing countries, while also contributing to the sustainable development needs of the host country.

Projects registered under the CDM can earn saleable Certified Emission Reductions credits – popularly known as “carbon credits” – each equal to one metric ton of carbon dioxide.

The project hopes to complete installing solar water heaters in 2 300 houses by 2010, with funding from the national Environment Department and the Western Cape provincial government.

The Cape Town City Council, owners of the Kuyasa project, have already sold carbon credits to the UK government and hope to generate and sell more so as to maintain the water heaters and invest in other community development projects.

Funding has come from national and provincial governments and the South African Export Development Fund, a non-profit organisation, has underwritten the project.

Parastatal utility Eskom generates most of South Africa’s electricity in coal-fired power stations, and the cheap energy alternative presented by Kuyasa has stirred some interest.

Zuko Ndamane, the project manager, is pushing for integration of the solar power generator model into new low-income housing developments

“It is more expensive to retrofit houses with energy-saving devices, like we did in Kuyasa,” he says.