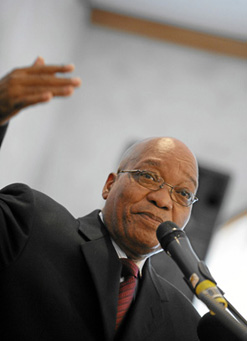 President Jacob Zuma will be travelling to
the United Kingdom at the invitation of
the Queen Elizabeth II.
(Image: World Economic Forum)

President Jacob Zuma will visit the United Kingdom (UK) at the invitation of Queen Elizabeth II. He is expected to discuss bilateral trade and issues of mutual interest with the Queen and Prime Minister Gordon Brown.

The trip is viewed as a positive step towards consolidating relations and improving trade between the two nations. The queen invites only one head of state a year to visit her, so Zuma’s visit is a significant stride for South African relations with Britain.

The South African president will be travelling to the UK on 2 March. On the morning of the 3 March, a horse carriage will collect Zuma at the London hotel and take him through St James Park in central London to Buckingham Palace where he will be the guest of Queen Elizabeth II.

Zuma has been asked to unveil a plaque at Oliver Tambo House, the former residence of the late ANC president in Muswel Hill, and meet with community leaders who have had a long association with South Africa and the struggle for liberation.

The visit highlights the increasingly important economic relationship between Britain and South Africa. Britain is one of South Africa’s top three trading partners, with about R74.9 billion in trade passing between the two nations in 2008.

The UK is also South Africa’s largest foreign investor with investment flows ranging from R21.8 billion in 2004 to R47.7 billion in 2005.

Zuma will also be addressing the Members of the British Parliament at the Palace of Westminster.

“He will discuss social security with the queen; but heavyweight political discussions will be reserved for his meetings with British government and party leaders,” said Vincent Magwenya, presidential spokesperson.

South Afria and the UK enjoy long-standing cordial relations, which date back to the colonial era.

Since 1994 the two countries have worked together on many bilateral and multilateral issues, and as partners on the SA-UK Bilateral Forum – a structured mechanism to manage and monitor bilateral relations between the two countries.