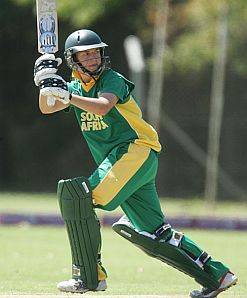 Local cricketer Olivia Anderson is making a
name for herself in England.
(Image: Cricinfo)

South Africa was recently chosen to host the inaugural ICC Women’s Cricket Challenge, which will take place in Potchefstroom, North West province, from 6 to 16 October 2010.

The tournament will be played under the auspices of the International Cricket Council (ICC), with Cricket South Africa (CSA) as the official host.

According to the ICC, the challenge will take the form of all-women teams, currently ranked between fifth and 10th in the world, competing in a series of one day intenational (ODI) and Twenty20 fixtures. Countries in the line-up are South Africa, the Netherlands, West Indies, Sri Lanka, Pakistan and Ireland.

“This tournament is an ideal way for the women’s teams ranked outside of the top four to gain more match experience in both ODI and Twenty20 formats,” ICC global development manager Matthew Kennedy said in a statement.

The first round of the challenge will consist of ODIs, while the spectators’ favourite – the Twenty20 games – will begin on 14 October. Most of the matches will be played at the North West University’s Potchefstroom campus.

It’s hoped the October competition will shake up women’s ODI rankings and enable some of the competing countries to qualify for the ICC Women’s Cricket World Cup to be played in India in 2013.

“The tournament will also provide a good challenge for all six competing teams, as none of them has yet qualified for the ICC Women’s Cricket World Cup,” Kennedy said.

South Africa participated in the 2009 World Cup held in Australia, and hosted it in 2005.

The country’s female players are expected to perform well in the African qualifier games, which will wrap up in December 2010.

The final international qualifiers, to be held in Bangladesh in November 2011, will see 10 nations battle it out for the four remaining World Cup spots.

SA women on a good wicket

South Africa’s first national women’s cricket squad was selected in 1997 and since then the country taken bold steps to develop the sport for females – this includes setting up the Cricket South Africa Women’s Cricket Committee.

Women’s cricket gained further momentum in South Africa at the start of the millennium when competitions such as the interprovincial league were initiated. In the early 2000s more than 9 000 females from 1 109 schools and 269 clubs were playing cricket, according to CSA.

Local batswoman Olivia Anderson, who debuted for South Africa in 2008, is currently making a name for herself in the UK playing for Shepperton Cricket Club. She’s racked up 1 000 runs this season, after scoring 76 off 66 balls in a match against Purley Redoubtables on 8 August.

Although the final player selections for the October challenge have yet to be announced, Anderson is one of the favourites for the South African squad.