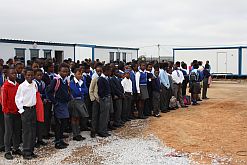 Lawley residents were relieved to finally
get a high school in their area, children
no longer have to travel long distances to
other areas to attend school.
(Image: Kirsten Koma)

The South African government has launched a massive turnaround strategy for basic education, committing to build more public schools in disadvantaged areas and radically improve the quality of teaching and learning.

The action plan fits into a greater scheme called Schooling 2025 – the vision of which is to ensure that there are adequately resourced schools accessible to all South African children so they are able to attend and complete the compulsory grades one to nine.

“We want South Africa’s children to get only the best education at school – this is one of government’s top priorities,” said Basic Education Minister Angie Motshekga.

In many of the country’s rural areas and townships, pupils have to travel vast distances to get to and from school, and sit in overcrowded and ill-equipped classrooms. With such obstacles, there is a high incidence of pupils dropping out of school before completing the compulsory phase or grade 12, the final year of high school.

The Department of Basic Education has undertaken to build more schools to alleviate some of these problems. In 2011, seven new schools will be opened in Gauteng, nine in the Western Cape and 20 in KwaZulu-Natal.

Monako Tsotetsi from Lawley, a township in the south of Johannesburg, was excited as he prepared for his first day at the community’s new high school, aptly named Lawley Secondary School. “It’s so good to go to school just down the road from your house. I don’t have to wake up in the wee hours to travel for about two hours to get to school anymore.”

In January of 2010 Motlanthe visited the Lawley community and many residents spoke to him about the need for a secondary school in the area. Most senior pupils at that time had to travel a distance to Lenasia or Ennerdale to attend high school – and transport was costly for their low-income families.

“It also just took too long to get to school, which took a toll on us and tampered with our ability to be fresh and focused for school,” said Tsotetsi.

Members of the community say they are impressed that the deputy president was so swift in attending to their need. “This is a really great move by Motlanthe,” said Thabiso Molefe.

“Not having a high school here led to many of the kids, whose families could not afford school fees, doing crime or drugs. Now the kids have a chance at a better life.”

Speaking at the school’s opening ceremony, Mokonyane said: “You’re going to make history. One day when you’re older you will say I was among the first learners of this school.”

The premier encouraged the pupils to study hard and work towards achieving great grade 12 marks. “Start today to prepare, and it is possible that your future can look brighter.”

Motlanthe also encouraged the pupils and teachers to work together to bring about great results at the school. “This school begins with a blank sheet. It brings no baggage, it has no history of failure and can therefore move directly into becoming a school of excellence,” he said. “The future of this school depends on what both students and the teachers put in.”

The school, which comprises 24 prefabricated classrooms, has 11 teachers and 200 pupils enrolled in it at the moment. The basic education department said the school could accommodate more pupils as time goes by.

The government chose prefabricated classrooms as a temporary measure at the school because they could be set up relatively quickly and easily, as opposed to having to construct the institution from scratch.

“If this school had not been built, I know I would have ended up without an education. My parents would not have been able to afford to send me to school far away for much longer. This school is saving a lot of our lives and our futures,” said Tsotetsi.