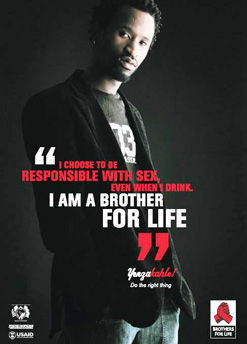 The days of South African men waiting at the kerbside while girlfriends and wives queue at the clinic for antenatal visits may soon be gone, thanks to a programme that aims to create a new idea of what makes a man.

Starting on 29 August, the Brothers for Life campaign hopes to make men in their 30s more responsible for their health and their partners’ by seriously looking at issues such as multiple concurrent partnerships, low HIV testing rates and generally poor health-seeking behaviour – from a man’s perspective.

South Africa’s national HIV prevalence rate is about 11%, but men aged 25 to 49 have an infection rate of about 24% – more than double the average, according to the results of the third national HIV survey (PDF) by the Human Sciences Research Council, released in June.

Johns Hopkins Health and Education in South Africa has partnered with USAid and Sonke Gender Justice, which works to address social aspects of the HIV epidemic, with a particular focus on gender, in spearheading the project.

The issues may not be new, but the organisers hope the high-profile campaign’s novel approach will break through to what has been a neglected population in the country’s fight against HIV/Aids, said Bafana Khumalo, co-director of Sonke Gender Justice.

Many of the largest HIV prevention programmes, such as Soul City and LoveLife, target teenagers and youth, despite the real need for HIV prevention among the high-risk group of adult men, Khumalo said.

The statistics on men’s roles in everything from condom use to rape, while important, may have overshadowed the reality of some South African men, said Richard Delate, country programme director of Johns Hopkins Health and Education in South Africa.

But these men may be reluctant to admit to being the “good guy”, according to Nhlanhla Vezi of The Valley Trust, a health NGO based in KwaZulu-Natal and one of more than 30 NGOs implementing the Brothers for Life project. “A man may lie and say he has three girlfriends but, in reality, he might have no partner at all.”

Sex between older men and younger women is indicated as a primary driver of the high HIV prevalence rates, but Delate said men who signed up for the Brothers for Life movement might dent the rate of new infections as men adopt safer sex practices, and start talking about them.

From community hero to campaign pin-up

The campaign goes beyond the bedroom, encouraging men to take an active and early role in parenting, starting with their participation in prevention of mother-to-child transmission (PMTCT) services to their partners. Vezi said the men he worked with were excited about a programme that did more than stereotype them as violent and irresponsible.

“Men always say, ‘We want to be trained in term of issues of PMTCT and to understand partners.’ They say there is too much criticism from women saying they don’t participate,” he said. “Men are saying, ‘We don’t know how to help you, we can only drive to the clinic and wait in the car while you stand in line.'”

Women have already had their say in the campaign’s mass media component (PDF), nominating many of the men featured in the posters and TV adverts.

Creative director Xolisa Dyeshana was part of the team at Joe Public, the South African advertising firm that produced the campaign’s slick and upmarket look. Rather than using actors or models in TV adverts and billboards, the team opted to use men that women said embodied the campaign’s ethos of responsibility and wellness.

“We went into different communities and introduced the concept to women, and asked them to nominate men they felt represented these values,” Dyeshana said.

“There was no wardrobe, no make-up. The guy you see in the PMTCT ad – that’s really his partner and they’re really expecting a child,” he said. “We’re trying to create a new social norm.”