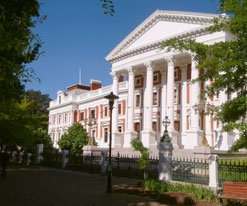 The Houses of Parliament in Cape Town
were completed in 1885. This is the seat
of the legislature, although government
resides in Pretoria.
(Image: Wikimedia)

On 31 May 1910 four disparate territories were united under the Union of South Africa, sparking a gruelling, 84-year struggle among the land’s indigenous people, who became disenfranchised.

Both the African National Congress (ANC) and apartheid rose out of unionisation, and led to a series of historic events which eventually resulted in the democratic South Africa we know today.

The Union originally consisted of the provinces of Natal, the Cape, the Transvaal and the Orange Free State, and was later expanded to include administration of the territory of South West Africa.

The Union shaped the political future of South Africa, notably in terms of the rise of the ANC, now in its 16th year of rule.

In his State of the Nation speech delivered in February 2010, President Jacob Zuma called on all citizens to use the anniversary of the Union to reflect on South Africa’s many achievements, especially in recent years.

“Significantly, the exclusion of black people from this union was one of the chief reasons for the formation of the African National Congress in 1912,” said Zuma. “As we mark this centenary later in the year, we should reflect on how far we have travelled as a country.”

While it is a solemn day for many, the date stands as a reminder of the seemingly insurmountable difficulties South Africa has overcome, and the tremendous strides it has made in all spheres – politically, economically, culturally, and socially.

Despite many years of turmoil, South Africans today can look back and appreciate that, even with all its problems and ongoing dissension, in many ways the country today is still a better place than it has ever been.

The Union was formed while the country was under British dominion. The British had colonised South Africa bit by bit since they landed in the Cape in 1795, seizing it after the Dutch settlers lost their grip on the region. The Dutch did manage to regain control for a few years in the early 19th century, but the British finally stamped their authority on the territory in 1806, and began to expand their dominance.

The arrival of about 5 000 British immigrants in the eastern Cape region in 1820 entrenched the British presence, although it intensified tension between the Dutch-speaking Boers who had settled on the land and the English-speaking colonists. The last straw for the Boers was the British abolition of slavery in 1828.

In the years that followed there were many bloody disputes between the British, the Boers, and the indigenous groups of people living here. A northerly migration of Boers in search of greater independence resulted in the establishment of a republic in today’s Free State province, although they encountered much resistance in the Zulu-controlled Natal territory.

The Boers did manage to soundly defeat the Zulus in 1838 at the historic Battle of Blood River, and they proclaimed the newly won territory, Natalia. But, by 1843, the British moved in, forcing the Boers to pack up again and move further north. Here they founded the Zuid Afrikaansche Republiek (ZAR) or South African Republic in 1852, with its capital at Pretoria.

In 1900 the British struck again, annexing the ZAR and renaming it the Transvaal colony. It later became the Transvaal province under the Union of South Africa.

The Oranje Vrij Staat, or Orange Free State, meanwhile, was pronounced by the Boers in 1837 after the defeat of the Matabele chief Mzilikazi and the capital was named Winburg. But it only became an official republic years later, with the signing of the Orange River Convention in 1854.

Like elsewhere, Boer rule there was short-lived and the British annexed it in 1900. The young republic effectively lost its independent status through the Treaty of Vereeniging, which followed the Second Boer War in 1902.

Britain had long wanted a united South Africa, and after this, matters seemed to be finally moving in that direction. However, peace was not guaranteed as the rights of the indigenous people were not recognised by the treaty. Discontent grew and eventually spilled over in the Bambatha Rebellion of 1906, which saw the Zulus in Natal rising up against British rule and taxation in that province.

The incident is considered by many to be the forerunner of the future struggle against apartheid, which would culminate 88 years later in South Africa’s first democratic elections and the inauguration of Nelson Mandela as president.

The British Parliament’s South Africa Act of 1909, which brought into legal effect the terms of government drawn up at a National Convention the year before, laid the foundation for the formation of the union. This legislative document served as the country’s constitution until its departure from the Commonwealth in 1961.

Unity under the Crown

With the four colonies now united under one treaty and one flag, the British were concerned mainly about loyalty to the Crown, and promoting harmony among the different population groups – although it could be said that this only applied to the white settlers.

After eight years of negotiation following the Vereeniging accord, the Union of South Africa was born. Of the four regions, only the Cape allowed coloured people to vote – provided they owned property.

Unionisation enabled Afrikaner nationalists to eventually gain the upper hand. This would lead to the country’s biggest shame – the dawn of apartheid.

At the end of the First World War in 1918 the Union took over the administration of the former German colony of South West Africa, under the terms of the newly established League of Nations. South West Africa became an unofficial fifth province, being administered in the same way as the other territories in South Africa.

Another British colony, South Rhodesia, now known as Zimbabwe, had a chance to join the nion in 1922, but a referendum proved that most people there preferred to live under their own government rather than be absorbed into the neighbouring state.

The Union of South Africa remained a dominion in the British Commonwealth until the enforcement of the Statute of Westminster in 1931 took away legislative power from British. This bestowed on South Africa a status equal to that of other Commonwealth territories, and did away with Britain’s right to pass laws on its behalf. The significance of this was that the South African Parliament gained greater freedom in dealing with the contentious “native question”.

But trouble was brewing. By allowing just two groups, the British and the Afrikaners, to have a say in the running of the territory, the British government had planted the seeds of apartheid. The Land Act of 1913 and the Urban Areas Act of 1923 were further omens of what was to come – complete segregation of the population.

In some quarters, disapproval led to far-reaching action. The ANC was founded in 1912 following a protest gathering of Zulu chiefs convened by lawyer Pixley ka Isaka Seme, who is credited as the founder of the organisation.

Sol Plaatje was named secretary and the first president was the Rev John L Dube. The organisation, known then as the South African Native National Congress, aimed to unite indigenous people and give them a platform to stand up for their rights.

Nationalism on the rise

The establishment of the Union in 1910 also led to the birth of the National Party in Bloemfontein four years later. The party, which first rose to power in 1924, wasted no time in boosting the numbers of white voters, notably by allowing white women to vote for the first time in 1930. This instantly halved the power of the coloured franchise in the Cape.

The more liberal United Party, a merger between the South African Party and most of the National Party, governed from 1934 to 1948. A small faction of Nationalists abstained from the merger. Calling themselves the Purified National Party, they rejoined the parent party when it came to power in 1948, to show solidarity with the strong Afrikaner opposition to South Africa’s obligatory participation in the Second World War.

The new ruling party immediately put the wheels of apartheid into motion, passing laws such as the Group Areas Act of 1950, and the Bantu Self-Government Act of 1959, which created the so-called homelands. This meant that the greater part of South Africa was under the control of white people.

The coloured people of the Cape lost their vote in 1968, and the government even tried to incorporate the administrative territory of South West Africa into South Africa as the fifth province, because it was felt that the Afrikaans and German citizens there would add strength to the Nationalist cause. But this move was not condoned and never officially recognised by the rest of the world.

The Union of South Africa became a republic on 31 May 1961 – but not before the National Party’s apartheid policies had earned the world’s wrath. On attaining independence, South Africa’s racial policies were criticised and condemned by other Commonwealth members, and the country left the association under a cloud.