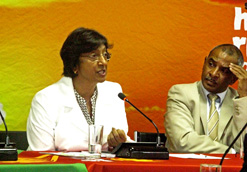 On Friday Pillay – who is based in Geneva for the duration of her term – visited the South African Human Rights Commission, on the invitation of commission chair Jody Kollapen. There she met with some of the country’s leading human rights groups, and spoke passionately about the upcoming Durban Review Conference, due to take place in Geneva on 20 to 24 April this year.

“We have a shared commitment to take part in the human rights agenda, and during the Durban Review Conference, we will be looking at what the countries who attended the racism conference eight years ago did to implement the decisions taken at that conference,” she said.

The Durban Review conference will assess the implementation of the resolutions adopted during the 2001 UN World Conference Against Racism, Racial Discrimination, Xenophobia and Related Intolerance in Durban. It was attended by over 10 000 people from across the world.

The conference ended with the adoption of the Durban Declaration and Programme of Action (DDPA), which gave recommendations on how to combat racism and racial discrimination.

In 2006, the UN General Assembly decided to convene a review conference, in which the DDPA would convene again in 2009.

Pillay’s department, the Human Rights Council, was mandated to spearhead this programme.

The first Substantive Session of the Preparatory Committee for the Durban Review Conference met in Geneva in May 2008, the second took place in October and the third is scheduled for mid-April, just before the start of the main conference.

During the sessions, several NGOs were given an opportunity to give their input into the draft outcomes documents that will be used as a guide for all of those attending the conference.

In a 23 January letter to the NGO Civicus, Pillay stressed the importance of having all countries in the world attend the conference. This was shortly after Canada announced it would be withdrawing from the round table.

“I grew up in Durban, South Africa, under a system of apartheid that institutionalised racial discrimination, denying equal rights of citizenship to all those who were not white,” Pillay wrote.

In the letter, Pillay recalled how painful it was when she later served as a judge on the Rwanda Tribunal on genocide, where once again it was evident how discrimination – by race or tribe – could cripple a society,

“I came to know in painful detail, killing by killing, the unimaginable destruction of humanity when ethnic hatred explodes into genocide. I know that the consequences of allowing discrimination, inequality and intolerance to fester and spiral out of control can be genocidal.”

At the 2001 conference, Israel and the US walked out of the conference after Israel’s policy on the Palestinians was likened to apartheid. Canada decided to pull out of the 2009 review conference, saying the meeting “would likely degenerate into … expressions of intolerance and anti-Semitism”.

Born in 1941, she holds a BA and a LLB from the University of Kwa-Zulu Natal.

She also has a Master of Law degree and a Doctorate of Juridical Science from Harvard University.

Her career started in KwaZulu-Natal, where she was the first woman to practise law in the province in 1967.

She represented many anti-apartheid activists, many times exposing the torture her clients had suffered at the hands of apartheid police.

Pillay is also credited as one of the few lawyers who played a pivotal role in fighting for key prisoner’s rights on Robben Island, where many activists were incarcerated.

In 1995, she was appointed a high court judge and, in the same year, was asked to serve on the International Criminal Tribunal for Rwanda. She held the latter post for eight years, four of them as tribunal president.

In 2003 she was appointed as a judge on the International Criminal Court in The Hague, where she remained until August 2008.

The following month, she started her new job as the UN high commissioner for Human Rights.

Pillay has also played a fundamental role in fighting for women’s rights. As a member of the Women’s National Coalition, she contributed to the inclusion of an equality clause in South Africa’s Constitution, considered one of the most enlightened in the world.

The clause prohibits any discrimination on grounds of race, religion and sexual orientation.

She is also a cofounder of Equality Now, an international women’s rights organisation, and has been involved with other organisations working on issues relating to children, detainees, victims of torture and of domestic violence, and a range of economic, social and cultural rights.