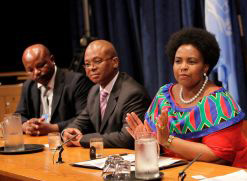 South Africa firmly committed itself to international peacekeeping efforts on 1 January 2011 when it took its place for a second term on the UN Security Council (UNSC).

Voted in by 182 member states of the UN General Assembly last year, the country will serve as a non-permanent member for the 2011/12 term.

The UNSC is made up of five permanent members – China, France, Russia, the UK and US – and 10 non-permanent members, which currently are Bosnia and Herzegovina; Germany; Portugal; Brazil; India; South Africa; Colombia; Lebanon; Gabon and Nigeria.

The council is responsible for maintaining peace and security across the globe, usually by recommending that the parties involved reach an amicable agreement. The UNSC also conducts investigations into areas of conflict and may send in UN peacekeeping forces to help reduce tension.

South Africa’s Department of International Relations and Cooperation (Dirco) said the country’s UNSC seat would give it the opportunity to forge closer partnerships with other member states.

The department added that South Africa is committed to contributing to the work of the UNSC in maintaining international peace and security, particularly in Africa.

“More than two-thirds of the conflicts and crises that the security council handles are in Africa. It is not something that we should be proud of,” he said.

South Africa previously served on the UNSC in 2007 and 2008. “South Africa has learnt important lessons from the first term,” said Sangqu, who will lead the country’s UNSC delegation.

Dirco said it has assembled a “crack team” of diplomats and officials to help South Africa serve on the council.

“In its actions, South Africa will be guided by the commitment to uphold international law and universal values, and help others protect or achieve their inherent and inalienable rights,” said International Relations and Cooperation Minister Maite Nkoana-Mashabane.

She added that the country would continue with its efforts to promote and enhance the UNSC’s cooperation with regional organisations, particularly the African Union’s Peace and Security Council.

Sangqu said: “Ivory Coast will be an issue we will have to deal with. There is now a standoff with regards to who the leader is. As a council member, South Africa will have to lead from the front on such issues.”

South Africa will also advocate for more resources to help resolve the conflict in Somalia, the ambassador added.

He said the UNSC should not to let the situation in that country become “a forgotten conflict” like the dispute between Morocco and Western Sahara guerrillas.