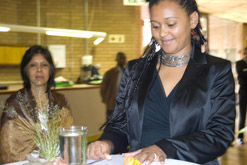 Global climate change is probably the most important issue facing decision-makers in the 21st century. Because South Africa is a developing country, the Kyoto Protocol does not require it to cap greenhouse-gas emissions. Nonetheless, the country has voluntarily committed to stabilising emission between 2020 and 2025, followed by an unchanged plateau for 10 years thereafter, and an active reduction from 2035 on.

For these targets to be met, the country must develop a strategy now. In order to get input from the widest possible range of stakeholders, the Department of Environmental Affairs and Tourism (DEAT) and the Department of Science and Technology will be holding a Climate Change Summit from 3 to 6 March 2009 at the Gallagher Convention Centre in Midrand, Gauteng.

One of the organisations that will submit resolutions to the summit will be the Southern African Faith Communities Environment Institute (SAFCEI), a multi-faith environmental organisation that works in two ways.

It is generally accepted that global climate change is directly caused by the excessive, affluent and acquisitive lifestyle of the wealthier and more influential members of society. So the solution to the problem will have to include some lifestyle change.

This is where the faith communities step in. It is in the churches, temples, mosques, meeting houses and stone circles in the veld that the people of South Africa gather to contemplate their relationship with the universe, with nature, and with their god or gods.

A major aim of SAFCEI is therefore to work on the consciences of faith leaders so they can encourage their constituents to live in a more environmentally responsible way, and so  contribute to the solution, not the problem.

A call to action

More than that, religious communities also have a responsibility to speak out on behalf of their members. To this aim SAFCEI, in partnership with Indalo Yethu, held a Religious Leaders Summit for Sustainable Development in Johannesburg from 10 to 12 February 2009. Indalo Yethu is an independent trust set up by DEAT to communicate environmental issues to South Africans.

Over a hundred religious leaders of various levels and from diverse faiths met for the three days to thrash out a two-fold strategy.

The first day was dedicated to exploring ways faith communities can directly affect change by adopting sustainable alternatives in their places of worship, and by encouraging their communities to do the same. This directly addressed one of the main issues brought up by Tinyiko Maluleke, president of the South African Council of Churches, in his keynote address.

“The faith communities are our only hope to debunk the myth of the environment as an elite-based concern,” he said. “In your congregations you have the rich and the poor. But you also have culprits and victims. CEOs of the worst polluting companies may be worshipping in your sanctuary – your role is bigger than you embraced”

But that’s only one side of the story, so the second and last days were spent drawing up a declaration on climate change, and drafting a resolution to take to the DEAT summit in March.

After high-level input and a panel discussion on these areas, the delegates formed smaller groups to draft the relevant resolutions. Not surprisingly, they discovered an enormous overlap in the focus areas.

Overarching all is the dominant economic system, which encourages a culture of profligacy and waste. So probably the most controversial of the statements to come out of the summit is the call to the implementation of a new economy similar to that drawn up at the Tällberg Forum in Sweden in 2008. This calls for an economy that, instead of being profit-oriented to the exclusion of all else, is “designed to meet human needs”, is sustainable, and is “bounded by ecosystem limits”.

The declaration was signed by Tahirih Matthee, the chair of SAFCEI, and June Josephs-Langa, the CEO of Indalo Yethu, while delegates stood around them in a circle. In true SAFCEI fashion, the summit ended with an interfaith worship and a few irresistible impromptu songs of praise.

Geoff Davies and Liz McDaid will attend the Climate Change Summit in March to present the declaration and resolutions on behalf of the faith communities represented at the SAFCEI summit.