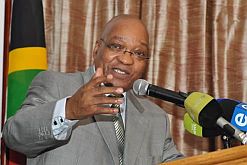 President Jacob Zuma is in Uganda to
strengthen relations with the country.
(Image: The Presidency)

and are set to strengthen economic and political relations during President Jacob Zuma’s two-day state visit to the East African country.

Zuma, who arrived there on the evening of 24 March, is being accompanied by more than 30 South African business people and nine government ministers.

“The visit is aimed at further enhancing economic and political relations between the two countries, developments in the East African region as well as multilateral cooperation in the African Union, United Nations and other key forums,” Zuma’s communications advisor Zizi Kodwa said in a statement.

The South African business contingent has been introduced to opportunities in Uganda through a forum co-chaired by trade ministers from both countries. “This will help to expand the areas of economic cooperation”.

Agriculture, tourism, mining and energy, and information and communications technology have been the key areas identified by the South African government to offer “profitable investment opportunities in ”.

Uganda’s Daily Nation newspaper reported that during his visit Zuma would launch the Uganda Chamber of Mines and Petroleum, a non-profit organisation set up to attract potential investors.

Chairperson of the chamber, Elly Karuhanga, said they expect the South African business delegation to look for ways to become involved in ’s growing oil sector, the newspaper reported.

“Since the discovery of oil, has become an attractive investment destination for investors,” he said, according to the daily. “Very many investors are now eying the country because of the expected opportunities that come with oil.”

Ugandan President Yoweri Museveni announced the discovery of oil in the country in 2009 and since then prominent firms, such as UK-based Tullow Oil, have landed lucrative deals there.

“The mining, oil and refining of petroleum sector with the discovery of oil in the Lake Albert region also provides new areas of business,” said Zuma, addressing the South Africa-Uganda Business Forum on 25 March.

Mobile phone network operator MTN is currently the leading South African business in . The company broke into the market there in 1998 and now boasts about 3 500 000 customers. It “has since grown to be the leading telecommunications company in ” and “we are still growing”, according to the MTN website.

Other South African businesses with a presence in the East African country include Stanbic Bank , a subsidiary of Standard Bank, and Shoprite and Game stores.

“We recognize that South Africans are among the top contributors to foreign direct investment flows to Uganda, and South Africa is firmly entrenched near the top of the list of countries from which Uganda sources imports,” said Zuma.

Zuma is also scheduled to open the OR Tambo School of Leadership on 26 March, an institution built in the former African National Congress (ANC) military camp in Kawaweta. Named after the ANC stalwart Oliver Tambo, the institution will be used to train ’s senior police, prison and military staff.

The school, completed last year, has been built by South Africa “as a token of appreciation and gratitude to the government of Uganda for the support and solidarity provided to South Africans in exile during the struggle against apartheid”, said Kodwa.

Zuma will also unveil the South African Wall of Remembrance in the capital city, . The wall commemorates ANC freedom fighters who died in , Kodwa said.

“The state visit will build on the excellent relations forged during the struggle against apartheid, when provided solidarity and support to the South African liberation movement,” he added.