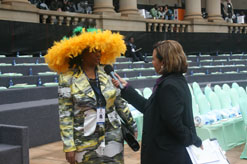 Buhle Mthethwa, chairperson of
the National African Federated Chamber
of Commerce in a bright designer hat,
being interviewed about her choice of
outfit. 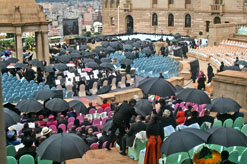 Guests use their umbrellas as the rain
starts pouring. 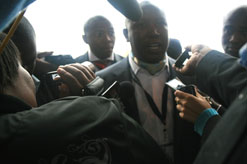 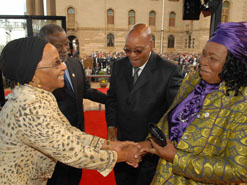 South Africans across the country on 9 May celebrated the inauguration of President Jacob Zuma, South Africa’s fourth president of the democratic era.

Cold and rainy weather failed to dampen the jubilant spirit of thousands of South Africans who also flocked to the Union Buildings in Pretoria to witness the event.

President Zuma was calm, flashing a confident smile as he entered the Union Buildings’ amphitheatre to a rousing applaud of some 3 000 invited guests, who broke out into the rendition of his famous mshini’wam (my machine gun) tune, which echoed throughout the venue.

The song was made famous by Zuma, who usually sings it during public addresses.

Loud cheering and the distinctive ear-splitting sound of vuvuzelas (plastic trumpets) could also be heard from the southern lawns, where over 30 000 well wishers watched Zuma’s entrance from large screens.

Accompanied by his first wife Sizakele, Zuma greeted former president Thabo Mbeki and his wife Zanele, who were seated at the specially built podium for the ceremony.

Zuma and the first lady then greeted former president Nelson Mandela. Zuma was seen kneeling in front of Mandela, almost as a way of receiving Madiba’s blessings before commencing his term.

The chilly wind and torrential downpours had been expected, and guests were provided with blankets and umbrellas. But when the official programme started at 11am, the grey clouds had cleared and the sun had come out.

During the half hour or so that it rained, guests entertained themselves by singing and dancing to old antiapartheid struggle songs, as well as newer compositions in praise of Zuma.

The media also grabbed the opportunity to interview high-ranking politicians who had scurried to the media balcony for cover.

Malema used the opportunity to voice his satisfaction at the outcome of the elections, which spelt the ascension of Zuma to the presidency.

Blade Nzimande, the general-secretary of the South African Communist Party and now the minister of higher education, Zwelinzima Vavi, general secretary of the Congress of South African Trade Unions, Matthews Phosa, ANC national executive committee member, and Bheki Khumalo, former presidential spokesperson, were among those interviewed during the unprecedented chance presented by the rain.

Various venues across the country had live satellite screenings of the inauguration, for those unable to attend the event in Pretoria.

Thousands of people converged at the Durban City Hall in KwaZulu-Natal, to watch the province’s resident taking the highest seat in the land.

Speaking to government’s online news service BuaNews, Sihle Mthembu, who attended the Durban screening, said not even the weather could keep him from celebrating the moment with other South Africans,  “I could have stayed at home and watched the inauguration on the television, but I wanted to join other people and celebrate.

“I wanted to feel the vibe with other people shouting, singing and dancing to Msholozi’s  song Mshini wami,” Mthembu said.

“Msholozi” is Zuma’s clan name popularly used when referring to him.

Sindisiwe Zikode also echoed Mthembu’s excitement; “I would not miss Msholozi’s inauguration for anything. I am here to see the local man being given the biggest position in the country.”

In other parts of the country, in the Eastern Cape, South Africans were able to watch the inauguration in eDutywa, Mt Frere, Port Elizabeth and Grahamstown.

Those in the Free State were able to enjoy the event in Bloemfontein at the Rocklands Community Hall, while those in Thaba ‘Nchu witnessed historic event Mmabana Cultural Centre.

In Limpopo, 10 screenings were held in towns including Polokwane, Makhado and Tzaneen.

In his acceptance speech after Chief Justice Pius Langa swore him in, Zuma laid the framework of his government for the next five years.

Describing the Mandela’s presidency, Zuma praised him for its unifying factor, “Madiba healed our wounds and established the rainbow nation very firmly. He set us on the path of nation building and prosperity and made us a respected member of the world community of nations.”

Of Mbeki’s presidency he said, “He took the country forward as a true statesman. He made a remarkable contribution towards strengthening our democracy, and laid a firm foundation for economic growth and development.”

The seven-month term in office of former president Kgalema Motlanthe was also hailed by Zuma, “He [Motlanthe], came into office during a period of great anxiety, and brought about calm, stability and certainty. He has led us in a very capable manner and the transition has become smooth and well-managed.”

Zuma than took the opportunity to tell South Africans that the mission of his administration over the next five years would be hard work and delivery on its election manifesto.

He promised that for as long as there were South Africans living in abject poverty and experiencing social ills such as a lack of proper education, unemployment, women and child abuse, labour exploitation and a lack of proper housing, his government would not rest.

He also spoke on the role of the media as the watchdogs of society, “We must defend the freedom of the media, as we seek to promote within it a greater diversity of voices and perspectives.”

Stronger relations with more countries around would be cemented by formal agreements, “We will continue to use multilateral and bilateral forums and relations to take forward the goals of eradicating global poverty, strengthening peace and security and to promote democracy.”

Spokesperson for the newly formed Congress of the People (Cope) Phillip Dexter said Zuma’s speech had been welcomed by the party, “In parts he acknowledged the roles of former presidents Nelson Mandela, Thabo Mbeki and Kgalema Motlanthe and the positive aspects of their legacy.” he said.

Dexter said that Cope would ensure that Zuma keeps his word and delivers on his promises.

One of Zuma’s harshest critics and Cope member Unisa vice-chancellor Barney Pityana said it would only be fair to give the new president a fair chance to settle in. “I wish to suspend my judgment on Zuma and give him and his administration support and a fair chance to ensure that they deliver; I hope the cynicism will be over.”

Leader of the official opposition the Democratic Alliance and Western Cape premier Helen Zille also gave Zuma’s speech positive feedback. “[Zuma’s speech has] hit the spot. The only problem is that deeds speak louder than words, and everything he has done over the past few years contradicts what he said today.”