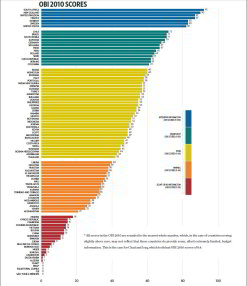 A graphical depiction of the countries,
ranked and colour-coded according to
the transparancy of their budget process.
Click on the image to view a bigger version.
(Image: International Budget Partnership)

South Africa’s budgeting system has been rated the most transparent in the world following the recently announced results of the International Budget Partnership’s (IBP) Open Budget Survey 2010.

This is an impressive achievement for the country considering it beat all developed nations surveyed. In 2008 South Africa was ranked second, with the UK coming first.

The study evaluates whether central governments give the public access to budget information and opportunities to participate in the budget process, and examines the ability of legislatures and auditors to hold their governments accountable. The survey involved 94 countries and takes place every two years.

“Open budget systems are essential to creating free and just societies in which the public is empowered with the knowledge of how the government is managing their resources,” the IBP said.

“The IBP formulated the Open Budget Survey to promote greater openness in national government budgeting systems; to document the current budgeting practices of governments; to establish standards for transparent, participatory, and accountable budget systems; and to identify countries in varying contexts and with different characteristics that are meeting or are on their way to meeting these standards.”

The 2010 survey had an additional nine countries in the rankings – Chile, Iraq, Italy, Mali, Mozambique, Portugal, Slovakia, Spain and Timor-Leste (also known as East Timor) – compared to the 85 that were assessed in 2008.

To simply measure the overall commitment of the countries to transparency and to allow for comparisons, the IBP created the Open Budget Index (OBI).

The average OBI score for countries surveyed in 2010 is 42 out of 100. About one-third of the countries (33) provide some budget information, scoring between 41 and 60 – although this data is far less than what is required to obtain a clear understanding of the budget and enable a check on the executive. Even when budget documents are made public, essential information is often absent for these countries.

Nations performing poorly on the OBI tend to share certain characteristics such as low levels of income, low levels of democracy and aid dependence.

But progress has been particularly notable among several countries that previously performed very poorly on the OBI, including Egypt, Mongolia and Uganda.

Egypt has recently emerged from a spate of deadly conflict, which led to the ousting of their president Hosni Mubarak after 30 years of rule. Similar unrest has since broken out elsewhere in North Africa and the Middle East.

A budget is a government’s plan for how it is going to use the public’s resources to meet the public’s needs. Transparency means all of a country’s people can access information on how much is allocated to different types of spending, what revenues are collected, and how international donor assistance and other public resources are used.

Transparency is an important first step to holding governments accountable for how they use the people’s money.

“Open budgets are empowering,” said Warren Krafchik, IBP’s director. “They allow people to be the judge of whether or not their government officials are good stewards of public funds.

“Our goal is to promote increased public access to government budget information. We’ve seen how this can lead to concrete improvements in people’s lives,” added Krafchik.

The index score is largely based on whether a country makes eight key documents available to the public. These are the pre-budget statement, executive’s budget proposal, citizens’ budget, enacted budget, in-year reports, mid-year reviews, year-end reports, and audit reports.

Of the 94 countries surveyed in 2010, 84% did not disseminate such a document, even though doing so required no further data or analysis. Egypt, Brazil and Mexico were among those which did publish citizens’ budgets.

South Africa also has the online “Tips for Pravin” system, in which ordinary citizens can send budget suggestions to Finance Minister Pravin Gordhan.

Where the public’s access to the internet is limited, the citizens’ budget is another way to inform the public about fiscal spending and policy, and can be published in newspapers and magazines or broadcast on radio and TV.

“For most people, an oral presentation is the most accessible,” said Krafchik.

“Restricting access to information hinders the ability of the public, journalists, commentators, academicians, and civil society organizations to hold officials accountable and creates opportunities for governments to hide unpopular, wasteful, and corrupt spending,” the IBP says.

Lack of information also hinders the ability of other government bodies, such as legislatures and national audit offices, to do their jobs effectively.

More than this, legislators in many countries receive budget information too late to allow them to adequately review it or to hold the public hearings necessary to foster debate and careful scrutiny.

Lack of transparency allows governments to hide unpopular, wasteful, and corrupt spending, the IBP says, citing these examples from 2008:

According to the IBP, when citizens have access to information and opportunities to participate in the budget process, they are able to improve the decisions made about what to spend public money on and how the money is actually spent. That means that the allocation of scarce public resources is more equitable and effective.

The first Open Budget Survey was completed in 2006, when 59 countries were studied. The 2008 survey studied 85 countries, while in 2010, 94 countries were chosen. This provided a more balanced geographic sample of nations around the world.

Some of the improvements in these countries were largely based on taking one basic and inexpensive step of publishing budget documents on their governments’ websites.

“The findings suggest that access to information can easily be improved at minimal cost and in relatively little time,” said Krafchik.