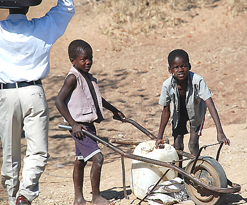 An old wheelbarrow is used to carry
drinking water from the borehole to the
village in Mberengwa district, Zimbabwe.
(Image:Irinnews.org)

Health authorities in South Africa are battling a possible cholera break-out in the northern parts of the country closest to Zimbabwe, were a debilitating cholera epidemic has so far claimed the lives of over 565 people.

The Limpopo River has tested positive for cholera, most likely caused by sewerage seepage from Beitbridge, the border post between South Africa and Zimbabwe.

Limpopo provincial health department spokesperson Phuti Seloba, told local media in South Africa that routine tests were run on 1 December and the results came back positive for the water-borne disease.

The Limpopo health department has treated 438 cases, 150 of them women and 42 children under the age of five.

The United Nations Office for the Co-ordination of Humanitarian Affairs has warned of an “alarming regional dimension”.

Of the infected people being treated in Musina, the closest South African town to Zimbabwe, 87 % were Zimbabweans and 12% South Africans.

Musina municipality spokesperson Wilson Dzebu, says that they are taking strict precautions to ensure that the water in the small town is safe. These include testing the municipality’s water supply twice a day. To date, the results have been favourable, indicating that the council’s water is not contaminated.

“We are making sure that the water that we supply to our people is of the highest standards. Our water is user friendly, drinkable and safe to use,” he said.

According to reports, the Musina Hospital is flooded with cholera patients from Zimbabwe who are coming into the country seeking treatment.

Dzebu says the municipality has also established a partnership with the Beitbridge District Rural Council of Zimbabwe, in assisting the neighbouring country to address the affects of its collapsed sewage system.

“We are engaged in negotiations with the provincial and national governments to find ways on how to address the cholera situation as well as the foreign national situation,” he says.

“We have also set up a Crises Task Team comprising different stakeholders to look at the cholera and its ensuing issues affecting Zimbabwe nationals.”

On 2 December 2008, the North West’s health department was also placed on high alert for a cholera outbreak, said that province’s spokesperson Nthabiseng Makhongoana.

She said so far all the cholera cases reported in South Africa have been linked to the Zimbabwe outbreak.

The United Nations has also warned that Botswana is also facing a cholera outbreak as several Zimbabweans have fled to that country for treatment.

Zimbabwe’s health minister David Parirenyatwa, recently said that even as the ministry is dealing with over 12 000 reported cases and hundreds of deaths, the country’s struggling medical system is taking all necessary steps to combat the cholera epidemic.

He said the health services were trying their best to contain the disease’s alarming spread, but that poor sanitation and the impending rainy season may worsen the situation.

“What I am afraid of is that now that the rain season has come, all faeces lying in the bushes will be washed into shallow wells and contaminate the water,” he said.

“Management of water and sanitation is primary to the cholera problem,” Parirenyatwa added.

The epidemic, which originally broke out in rural Zimbabwe, has now moved to various city centres.

According to Parirenyatwa, the movement of people between Zimbabwe’s cities played a contributing role in the spreading of the disease.

The World Health Organisation (WHO) says the epidemic, which has swept through the southern African country since August, is only the beginning of the health problems for Zimbabwe.

Local human rights groups are disputing the death toll given by that country’s health department.

The chairperson of a rights association of Zimbabwean medical doctors Douglas Gwatidzo, recently told an independent weekend newspaper that based on the government’s own statistics, the organisation estimates that cholera has killed at least 800 people in the last four months.

“Determining the exact number of people who have died from cholera could be very difficult because of the information blackout that characterised the early days of the epidemic,” he said.

“But with what we have the deaths cannot be anything less than 800 and I believe we are fast approaching 1 000.”

WHO has cast doubt on Zimbabwe’s ability to combat the cholera outbreak effectively.

The UN agency expressed its concern regarding the limited number of medical facilities that will be able to carry the increasing load of infected patients in the country.

Of the clinics that are open, there are few health workers, who struggle to deal with the hoards of patients needing attention.

International health aid groups have come to the rescue, with some of them building latrines, distributing medicine and hygiene kits, delivering truckloads of water, and repairing blocked sewers across Zimbabwe.

In a statement recently released by the UN Office for the Coordination of Humanitarian Affairs, the capital Harare, has suffered 177 deaths and 6 448 reported cases, which made up for more than half of all the total number of cases throughout the country.

UNICEF announced on 3 December 2008 a 120-day emergency response programme to assist Zimbabwe’s children, who’ve been the most affected by the deepening water crisis in the country.

Acting UNICEF representative to Zimbabwe Roeland Monasch, says the most vulnerable should be first in line for treatment, “Women and children face immense risk in Zimbabwe.  Schools and hospitals are closing, while teachers, nurses and doctors are not reporting for duty.”

“It is UNICEF’s top priority to ensure that Zimbabwe’s children get vital lifesaving interventions at this critical time,” he says.

Cholera is a highly contagious, but treatable water-borne disease. Symptoms include severe diarrhoea and vomiting.

Zimbabwe’s collapse of several major sewerage systems and lack of efficient garbage disposal make it easier for the cholera bacterium to multiply.

A shortage of clean water means residents have to rely on unprotected shallow wells for water.

The disease is usually contracted by drinking water or ingesting food that is contaminated with cholera bacteria.

Communities who do not have access to clean, treated water are particularly at risk. Quite often unsafe waterways are used for cooking and washing, which increases the risk of contamination.

Water can be purified with a teaspoon of household bleach to a five liter bottle of water or mixing one capful of household bleach with 20 to 25 liters of water. The water should be left for at least two hours (preferably overnight) before consumption.