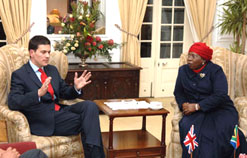 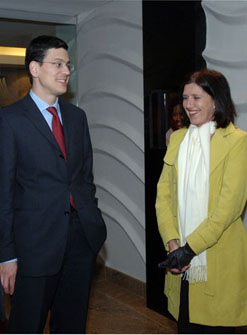 South Africa and the United Kingdom have reinforced their relationship following a recent two-day meeting of the eighth SA-UK Bilateral Forum.

Speaking at the conclusion of the visit from her counterpart, British foreign secretary David Miliband, South Africa’s minister of foreign affairs Nkosazana Dlamini-Zuma said on 8 July she was happy with the wide range of issues covered during the talks.

“We have discussed everything from health, sports, trade and industry, migration, climate change, general political issues, science and technology, conflict resolution, economic issues, corporate responsibility and so on,” she said.

“On the political front we have discussed both bilateral matters, issues on the African agenda and multilateral issues. Of course, issues on the multilateral agenda, included particularly Sudan and all its facets and the one you are all waiting for – Zimbabwe.”

During talks, the two ministers agreed that 2008 was a critical year for development as South Africa was halfway towards achieving its Millennium Development Goals (MDG) — the deadline for which is 2015. The goals are set out by the United Nations and cover issues such as health, education and poverty.

The UK is South Africa’s largest trading partner in Europe. The forum for bilateral talks was formed in 2000 with a view to regulate and enhance political and economic relations between South Africa and the UK.

During the talks a number of resolutions were made:

The ministers stressed the importance of pursuing sustainable, low carbon growth. They acknowledged that current climate change trends would undermine the conditions necessary for economic growth in both the developed and developing worlds, making it extremely difficult to achieve the MDG.

They acknowledged that a global transition to a low-carbon economy was both affordable and achievable, and presented many opportunities for developing the environmental sector of the economy. It was stressed that a global climate change agreement was needed, which would support long-term cooperative and domestic action from nations worldwide.

During the meeting Miliband and Dlamini-Zuma discussed the political crisis in Zimbabwe and both condemned the ongoing violence and intimidation there.

The two ministers also noted the decision of the Summit of the African Union on Zimbabwe and the respective governments’ stated positions on that issue. They reaffirmed the importance of dialogue between the Movement for Democratic Change and Zanu-PF to establish a lasting solution that reflects the democratic will of the Zimbabwean people.

During his visit, Miliband also delivered a keynote address at the University of South Africa, where he discussed the Zimbabwe issue at length.

He acknowledged that Britain may have erred during its colonial rule in Zimbabwe, but that what happened in the past did not stop it from condemning the current situation. “Britain has long and historical links with Zimbabwe. I have never believed that the rights and wrongs of our history should prevent us from speaking clearly and frankly about the situation today,” he said.

“[President] Robert Mugabe’s misrule does not invalidate the struggle for independence; our colonial history does not mean we cannot denounce what is wrong.”

Miliband noted that free and fair elections were only the basics of a free democracy. He said that President Mugabe’s victory in what had been dubbed the “one man election” defeated the basic fundamentals that govern democracy.

He said it was encouraging to see the vast majority of African leaders had spoken out against the pre- and post-election violence in June 2008.

South Africa’s health minister Dr Manto Tshabalala-Msimang and her UK counterpart, Dawn Primarolo, met to discuss ways in which the two countries would continue working together to share information and expertise on education and training of healthcare professionals.

This followed the health ministers renewing a memorandum of understanding that exists between the two countries. The understanding covers a range of healthcare issues, including the ethical recruitment of workers in the sector.

“Many countries have learned from our example of ethical recruitment of health workers, and indeed, admire such an effective example of bilateral cooperation,” Tshabalala-Msimang said.

South Africa stressed that although Britain was free to recruit South African doctors and nurses, it was important the country was not left stripped of its workforce. The two nations have agreement to work systematically on the issue.

The understanding, which was due to expire in October 2008, has been renewed for another five years. More clauses have been included in the agreement, which will explore new areas of health the UK and South Africa could be involved in.

Other issues that the two foreign ministers addressed included persisting conflicts on the continent in Abyei, south Sudan, as well as the lack of progress in Darfur. On a positive note, the ministers welcomed the recent signing of the Djibouti Agreement between the Transitional Federal Government of Somalia and the Alliance for the Re-Liberation of Somalia. This was described as an important milestone on the road to a peaceful Somalia.