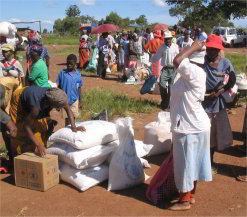 More than a quarter of the neighboring
country of Swaziland’s population relies
on food aid.
(Image: IRIN)

South Africa will launch its own development aid agency in 2011 in a move likely to boost the country’s status as an emerging economic power and champion of the African continent.

The South African Development Partnership Agency is expected to become operational before mid-2011 and will work with other donor agencies to coordinate development programmes, mainly on the continent.

Although the government is hoping for contributions from the private sector, most of the funding will come from public money, said Dr Ayanda Ntsaluba, director-general of the Department of International Relations and Cooperation.

“South Africa is in a unique position – we’re recipients of development assistance, and we’re anxious that that status be preserved. At the same time … we’re in the African continent and in that context we occupy a relatively privileged position,” he told Irin.

Since 2001 the South African government has channelled its aid contributions through the African Renaissance Fund (ARF), which is administered by the department. Much of the assistance provided by the ARF has focused on conflict resolution and peacekeeping in various countries including Mali, Zimbabwe, Burundi and the Democratic Republic of Congo.

“What became clear as we moved on is that we need to look beyond conflict resolution into largely post-conflict reconstruction, and that begins to involve many other departments and arms of state,” Ntsaluba said.

Although the mandate for the new agency was still in draft form, he said South Africa would continue providing assistance to countries recovering from conflict.

The Democratic Alliance, South Africa’s opposition party, has criticised the ARF for supporting “rogue” states and failing to monitor how its funding was being spent.

Ntsaluba responded that countries emerging from conflict often required the most assistance. “There will still be residual elements in those countries that triggered the conflict in the first place, but if we waited until it was all perfect then we’d be of no use to those countries.”

He conceded that the tracking of ARF funds had not been optimal, partly because the responsibility for administering projects had been spread across several departments. The new agency would be set up as a separate institution, with the administrative capacity to track and oversee all the programmes it funded.

Ivor Jenkins, co-director of the non-profit South African-based Institute for Democracy in Africa, said his organisation had been lobbying for the creation of an aid agency, so as to provide a more appropriate framework for South Africa’s current ad hoc interventions on the continent.

“We think it is long needed and required for South Africa because we are the biggest economic bloc on the continent and we have started to do quite a bit of aid support to different countries,” he said.

Jenkins added that it was important for South Africa to start to have a sense of responsibility, and to give as well as receive. Besides its humanitarian agenda, the agency would likely also serve as an expression of South Africa’s foreign policy agenda.

Ntsaluba confirmed that the decision to set up an aid agency was “not only a reflection of altruistic motives, but of how to advance South Africa’s own interests”.

South Africa was recently invited to join the BRIC (Brazil, Russia, India, China) group of major emerging markets. Jonathan Glennie, a research fellow of the Centre for Aid and Public Expenditure at the UK-based Overseas Development Institute, commented that other developing countries, such as India, China and Brazil, seeking to raise their international profile and strengthen political and trade ties, had also set up aid agencies in recent years.

“Aid is not just about reducing poverty, it’s a very strategic investment,” he said. “To become a big player, you need your own aid programme.”

Ntsaluba said the government had consulted a number of Western development agencies on the best approach to managing aid programmes.

Glennie noted that the South African government could pre-empt concerns about corruption and mismanagement of funding on the African continent by creating “the most transparent aid agency in history”.