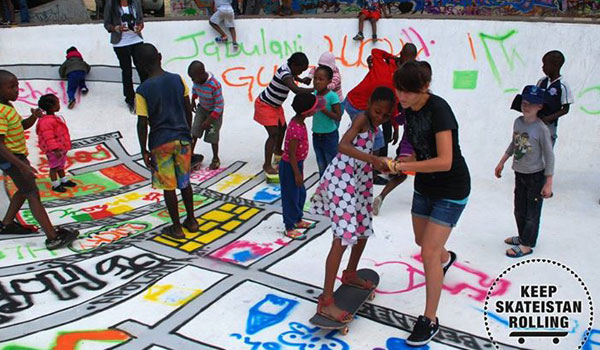 Skateboarding is a free-spirited activity often associated with rebellious youth, but in Skateistan, it is being used to grow a sustainable organisation locally and globally, and that will change the lives of hundreds of thousands of youth. The aim is to use skating as a hook, and deliver quality programmes that will help to create leaders who change the world. (Image: SkateistanZA)

Four wheels and a board – that’s all it is – but it is being used as a tool for empowering the youth, creating new opportunities and encouraging change.

Skateboarding is a free-spirited activity often associated with rebellious youth, but in Skateistan, it is being used to grow a sustainable organisation locally and globally, and that will change the lives of hundreds of thousands of youth. The aim is to use skating as a hook, and deliver quality programmes that will help to create leaders who change the world.

Through a partnership with the city of Johannesburg, Skateistan has identified some of the most at-risk communities in the city of gold that will benefit the most from its quality youth education programme. Skateistan runs skateboarding sessions twice a week for youth at a previously abandoned bowl in the suburb of Troyeville. With the help of local youth, Skateistan cleaned and restored the bowl, and then celebrated with over 200 neighbourhood residents by painting the bowl with a map of their area, complete with houses and schools. The bowl is now being skated and maintained by more than 50 youngsters each week. They also participate in regular music and arts programmes.

Skateistan plans to build a high-quality skate park and education facility in the Maboneng Precinct in central Johannesburg, on land provided through a rent-free land lease partnership with the urban development company, Propertuity. It should be up and running by early 2015. Funding for the project comes from the Danish Embassy in Pretoria, the Tony Hawk Foundation and The Sk8room.

With a strong emphasis on girls, street-involved children and marginalised youth from the ages of five to 17, Skateistan South Africa aims to provide youth leadership opportunities, access to education, a safe environment to build friendships and trust, as well as teach life skills and encourage freedom of expression – all done to help break cycles of poverty and exclusion.

Skateistan began as a grassroots Sport for Development project on the streets of Kabul, Afghanistan in 2007. It is now an award-winning, international non-governmental organisation with projects in South Africa, Afghanistan and Cambodia. Skateistan is the first international development initiative to combine skateboarding with educational outcomes. It is non-political, independent, and inclusive of all ethnicities, religions and social backgrounds.

It works with young people from five to 18, about half of whom are street-working children; 40% are girls. Its programmes, according to the founders, provides access to education, focuses especially on girls and working children, develops leadership opportunities and builds friendship, trust, and social capital.

From the moment Australian skateboarder Oliver Percovich dropped his board in Kabul in 2007 he was surrounded by eager children of all ages who wanted to be shown how to skate. Stretching out the three boards he and a former girlfriend and aidworker had brought with them, Ollie, as he is known, dedicated himself to the creation of a small non-profit skate school in Afghanistan.

A group of Afghan friends, who were naturals at skateboarding, shared the three boards and quickly progressed in their new favourite sport – and so skateboarding hit Afghanistan. The success with the first students prompted Ollie to think bigger: by bringing more boards back to Kabul and establishing an indoor skateboarding venue, the programme would be able to teach many more youth, and also would be able to provide older girls with a private facility to continue skateboarding.

Then, at the end of October 2009, Skateistan completed the construction of an all-inclusive skate park and educational facility on 5 428m2 of land donated by the Afghan National Olympic Committee. The indoor section was built by IOU Ramps.

Skateistan is Afghanistan’s first skateboarding school, and teaches boys and girls. It has built the two largest indoor sport facilities in Afghanistan, and hosts the largest female sporting organisation in its female skaters. Skateistan believes that when youth come together to skateboard and play, they forge bonds that transcend social barriers. Furthermore, through creative education classes they are enabled to bring change to issues that are important to them.

Skating is simply the hook for engaging with hard-to-reach young people. Skateistan’s development aid programmes work with growing numbers of marginalised youth and give them new opportunities in cross-cultural interaction, education, and personal empowerment. The organisation has expanded its activities to include skateboard aid projects and skate parks for Cambodian youth, a grassroots street-level programme in Pakistan, and a state-of-the-art learning and skateboarding centre in Mazar-e-Sharif, northern Afghanistan.

In Kabul, Skateistan’s participants come from all of the country’s diverse ethnic and socioeconomic backgrounds, and include 40% female students, hundreds of street-working children, and youth with disabilities. In its skate park and classrooms they develop skills in skateboarding, leadership, civic responsibility, multimedia, and creative arts, exploring topics such as environmental health, culture and traditions, natural resources, and peace, says the organisation. The students themselves decide what they want to learn, and they are then connected with a safe space and opportunities to develop the skills that they consider important.

Since Skateistan began in 2007, the founders have discovered that youth of all ethnicities, genders, and socioeconomic backgrounds love to skateboard. Skateistan brings them together, equipping young men and women to lead their communities toward social change and development.

“In Afghanistan and Cambodia, we have been able to use skateboarding as a hook to address complex social issues faced by youth. Skateistan is doing the same work in South Africa to address barriers such as social inequality, youth unemployment, gender discrimination, poverty and lack of education opportunities,” concludes Percovich.