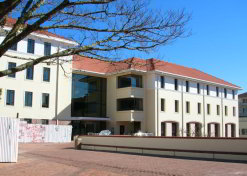 The new library at Rhodes University
is a world-class facility.
(Image: Rhodes)

The new R75-million (US$11-million) library at Rhodes University opened earlier in November 2010, and is expected to significantly boost the learning environment and quality of graduates at the Eastern Cape institution.

Speaking at the opening event, Minister of Higher Education and Training Blade Nzimande expressed his approval of the facility and said he was pleased by Rhodes’ commitment to building the library and fostering traditional ways of learning in today’s digital era.

The value of a top-quality library that offers access to digital and printed learning resources, and will enhance both learning and research, cannot be understated, said Nzimande, adding that a good library is an important factor in the quality of teaching and research output, and will benefit academics, students and researchers.

“I hope that this new library will be a central station for knowledge-building at Rhodes University,” said the minister. “Good libraries are a key of continued investment for universities.”

Vice-Chancellor Dr Saleem Badat said earlier this year that the state-of-the-art library will play a vital role in the university’s goal of remaining “one of Africa’s outstanding universities, committed to the production of knowledge and graduates who are knowledgeable, critical, competent, ethical and compassionate”.

Despite the fact that it’s a comparatively small university, Rhodes is one of the country’s top academic institutions in terms of research output, said Nzimande. “I have no doubt that the improvement of the library will allow this output to continue.”

Rhodes’ brand new facility, which covers an area of 4 500 square meters, has almost doubled the current library floor space. The previous library, which was severely overcrowded, with computer terminals vying for space among the books, is to be refurbished and will later house the greater part of the book collections.

New features include a round-the-clock reading room, group study rooms, and a number of collections categorised under social sciences, science and pharmacy, commerce, and humanities and education.

The as yet unnamed library offers seating for at least 20% of the student body, in line with international standards. The old building seated fewer than 10% of students.

Students have the use of a 54-workstation information commons for online research, a 26-seat laboratory which offers information literacy training to users, and the much-lauded Carnegie Research Commons. This project received a R2.8-million ($407 493) grant from the Carnegie Corporation of New York, which funds the establishment of learning institutions.

The Research Commons accommodates about 40 staff and users. It offers a quiet space where senior students and academics can carry out their specialised work using cutting-edge electronic equipment, with experienced library assistants on hand to help with research. Scholars may also use a seminar room with audio-visual facilities.

The building has been designed with care of the environment in mind. It features thicker, more insulating walls, an energy-efficient air-conditioning system, and an automated system that controls and optimises the flow of fresh air.

Disabled and partially sighted users have not been neglected. “This is an area which I am particularly interested in,” said Nzimande, “as I have asked the Department of Higher Education and Training to highlight the needs of students and staff with disabilities.”

The library’s budget was originally set at R86-milion ($12.5-million), but final costs are expected to total around R75-million, said Badat.

He attributed this massive saving to sound management by the project team, well as key components that cost less than expected. He added that the achievement is all the more impressive because the bulk of planning and building took place during South Africa’s 2010 Fifa World Cup preparations, when the country was still struggling to climb out of a recession. Building started in 2008 and took about two years to complete.

The national Department of Education granted R50-million ($7.3-million) on condition that Rhodes contributed the balance, whether by fundraising or from its own financial reserves.

The university’s development office has managed to raise some R20-million ($3-million), but because the final costs should come in at 13% below budget, this means that just R5-million ($727 385) is outstanding.