At Brand South Africa’s Gauteng Stakeholders Workshop in Sandton in August, results from its research projects and insights from global surveys were discussed. The research offers some positive outlooks for the country and the population, with the numbers to back it up. 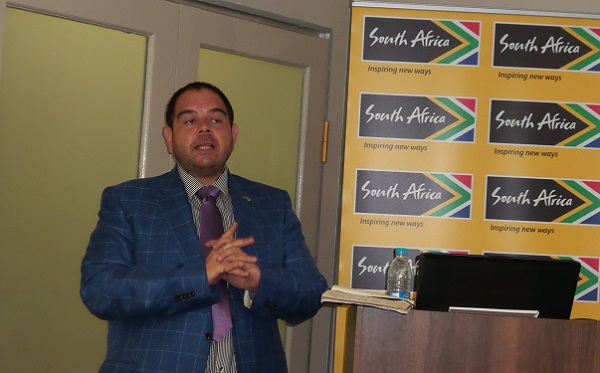 A presentation by Brand South Africa’s general manager for research, Dr Petrus de Kock, as part of the general discussion during the workshop on South Africa’s global and continental competitiveness, examined various internal and global research projects. These included the Domestic Perceptions project, the South Africa Incorporated (SA Inc) initiative, as well as various global economic and reputation indexes on how South Africa was comparing to the rest of the world.

This research found the emerging South Africa middle class (the LSM 7-10 group) had increased by 15% over the last 10 years. People were focused on developing their economic standing and choosing to spend what free time remained on family life rather than being involved in the community. A general distrust of government was found among the respondents, particularly when it came to job creation, policy implementation and economic growth, even though respondents believed the country still embodied the spirit of diversity and democracy. The feeling was however, that South Africa was capable of achieving great success.

Also, South Africans were generally more positive about the future of the country, particularly for the next generation, hoping that living standards would continue to improve for their children. Over 50% believed in committing (or continuing to commit) to staying in South Africa, no matter the circumstances. Notably, 13% believed in that national commitment, despite not considering it before. Most respondents also committed to the country no matter the situation in the future (74%), but 20% may consider a move out of the country should economic, social and political situations deteriorate.

Overall, loyalty remains strong in South Africa, yet younger people may consider moving out of the country to explore better options. The majority of these, however, strongly consider this a temporary move and will ultimately return to South Africa. 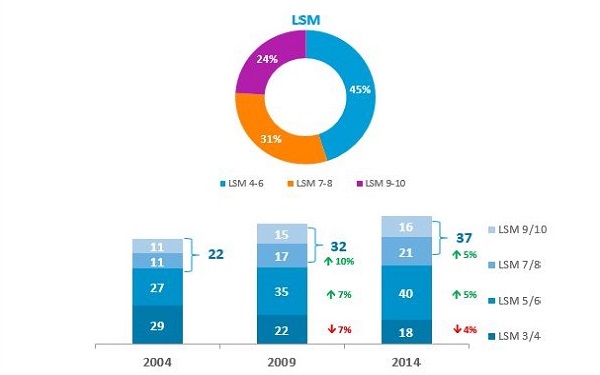 As part of Domestic Perceptions, a number of topic-specific papers have been published this year, these include:

Patriotism is still strong among South Africans. Social and cultural diversity is cited as the main proponent driving this national pride. Of the respondents, 57% believed the media added to the negative perceptions of the country. Other external social influencers, such as TV/radio news and non-digital social interactions, seem to have a more positive effect on the population than online news and social media, despite these being more popular. Most gather the insights and information that form their opinions from traditional media such as television, radio and newspapers, as well as from family and friends.

The South Africa pride index is at a considerably healthy 80%, with 61% considering themselves “extremely proud of being a South African”. Respondents cited diversity and democracy, cultural and sport successes and the country’s tourism as the main driving factors of this pride. Detractors of pride, predictably, included crime, corruption and perceived government ineffectiveness.

In the published research on optimism, titled South Africa: A Brand of Optimists?, measures of national optimism found overall there was a strong sense of hope and confidence among the population, particularly about the future.

Despite what the report called “a confrontational public discourse”, most respondents professed that the strides made in education, health care, religious and social tolerance helped to build optimism. The research found most wanted to continue living in South Africa and contribute to the country’s success, with constructive solutions to social, cultural and economic challenges. A quarter of respondents had optimistic outlooks for the future of the country. 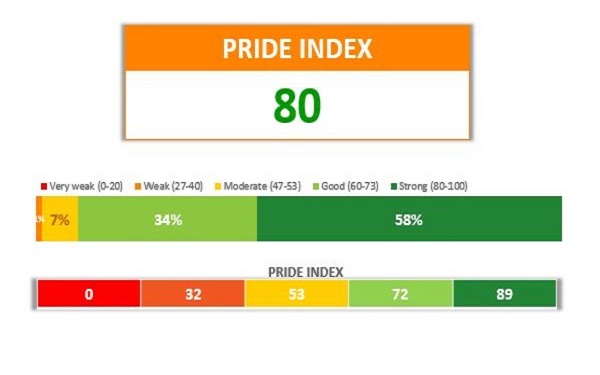 With an overall Pride Index of 80, the majority of South Africans show a strong devotion to their country, according to the Brand SA Domestic Perceptions report in 2015. (Image: Brand South Africa)

The publication A Youthful Population in a Young Democracy, measuring pride, social cohesion and active citizenry among the country’s young people, found the current generation – those who would be upholders of the National Development Plan’s Vision 2030 – showed hope and aspirations for the future. Yet, with 29% of the sample surveyed unemployed – or at least not in full-time employment – naturally concerns about job creation, education and economic growth loomed large for young South Africans.

De Kock emphasised that achieving a significant youth optimism percentage was key to helping solve these issues, with over 74% indicating that they wanted to live and work in South Africa and find positive outcomes for these issues.

Another point from the research was the youth’s lack of trust in the current political leadership regarding solving the challenges of crime, education, poverty and economic development.

After increased xenophobic attacks in the country, Brand South Africa looked to quantify the atmosphere around the issue and among the citizenry regarding foreign nationals and their role in South African life. Titled A Nation against Xenophobia, the report showed a majority of South Africans condemned any and all attacks on foreigners.

Most of the respondents said they wanted to continue to embrace the principles of ubuntu and respect for all people, and take positive action against the violence, including public demonstrations, donating money, time and other relief to those affected by the violence. Most also wanted to create a proactive discourse with the public and the government to deal with the challenges of xenophobia.

Respondents felt that the media had profiled South Africans as unwelcoming and violent, which they thought was inaccurate. The social activation of the country’s citizens in response to the xenophobic attacks, most respondents felt, helped to increase the exposure of the violence and pace of relief and positive reinforcement of the ideals of ubuntu.

In the publication Can Competitiveness be Africanised?, competitiveness in the African context was analysed and addressed. The research found that in the definition and conceptualising of competiveness in mere economic terms, there was no consideration for the associated human and environmental factors, as well as the importance of the cultural and social relationships between South Africa and the rest of Africa. According to the report “…in an era of global warming, rising inequality, social displacement and dislocation, competitiveness can ultimately not speak to, or reflect a world of rational market choice”.

Competiveness needs to consider and encompass education, health, environmental sustainability and food security in order to enhance the economies of countries, communities and individuals.

The economic relationships between the country and the continent are further explored in the section on South Africa Incorporated, below. 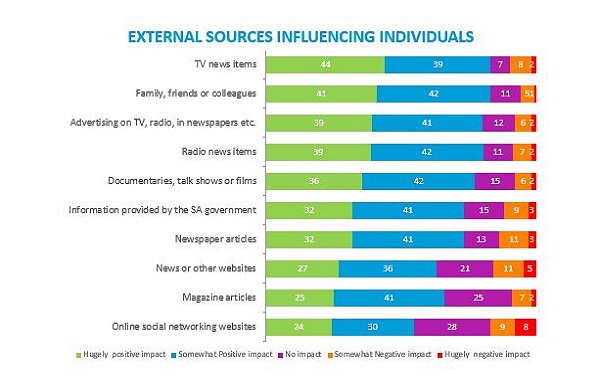 TV news, friends and family are some of the external influencers that have the most positive impact of the average South African’s national perception, according to the Domestic Perceptions research report by Brand SA in 2015. (Image: Brand South Africa)

Overall, De Kock said, regarding the various research gathered in the Domestic Perceptions project, “you can’t sell the brand of the country without inside buy-in of its people”, and the numbers in the research indicated that, despite their concerns, “South Africans are willing to take action, rather than wait for someone else to do so”. 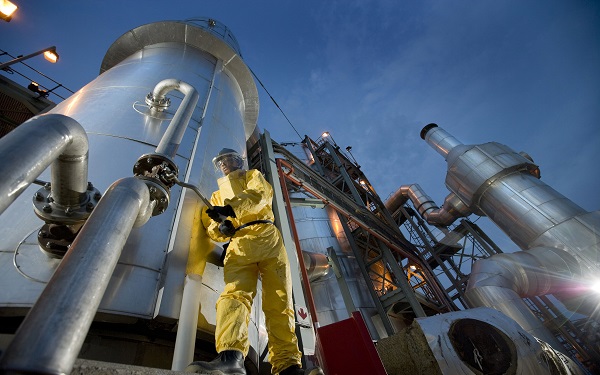 South African corporate governance, managerial and technical prowess, according to Brand South Africa’s SA Inc study, has built a positive reputation for the country in the rest of Africa. (Image: Pixabay)

SA Inc is another Brand South Africa research project. Designed to examine the country’s exposure in and strategic economic relationships with other African countries, SA Inc measures the impact of South Africa’s economic, social and cultural footprint on the continent.

• SA Inc found South Africa was the third largest direct foreign investor in Africa, after the UK and USA, according to the most recent Ernst & Young Africa Attractiveness Survey.

• The Industrial Development Corporation alone invested in 41 projects, with an investment portfolio of over R6-billion in 2012.

South African corporate governance, managerial and technical prowess, according to SA Inc, built a positive reputation for the country. And South African cultural exports – music, art, cinema and literature – enjoyed a popular presence in the rest of Africa. This resonance went a long way to enhance economic and political relationships between countries.

However, one negative aspect gathered from the research found South African businesses and representatives were viewed negatively, as imposing and aggressive, compared to the relatively more tolerant and culturally astute African nations. From a business perspective, more attention should be paid to how South African businesspeople conduct their inter-personal relationships and interactions, specifically when creating market entry strategies, designing an understanding of the diverse business and cultural environments according to the specific country targeted.

For more about SA Inc and its findings, find the full report here.

The Anholt-Gfk Nation Brands Index 2014 – a measure of global perceptions based on six key areas (exports, governance, investment, culture, people and tourism) – places South Africa down one position from last year, at 37 out of 50 countries surveyed. While the country’s overall reputation score improved from 2013, there were perception challenges regarding the tourism economy and the country’s influence in Africa.

According to the report, South Africa was still a model consistency, with reputation gains in exports and governance. Investment, too, had gained, but there was still concern over the country’s slow growth in environmental, heritage and technology sectors. Germany, India and the UK viewed South Africa the most favourably.

The Ibrahim Index is an annual evaluation of governance of countries in Africa, combining over 100 variables, assessed by various independent African and global bodies. The data collection is the most comprehensive and authoritative source for governmental authority. The data are used for economic purposes but also for assessing the rollout and success of government policies. This year, the South African Ibrahim rating was a mixed, but ultimately balanced assessment.

Ranked fourth overall, South Africa was the best in public management and third in gender equality, and it maintained good records for rule of law, human development and health care services.

Improvements had been made regarding infrastructure, sustainable economic development and rights participation. There had been a significant drop in confidence regarding national security and personal safety issues. Ultimately, though, South Africa maintained a sustained and reputable presence on the continent.

These reports are available to read on the Brand South Africa website, along with detailed breakdowns of all the research mentioned in this article.