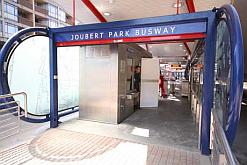 Executive Mayor of Johannesburg Amos Masondo and Minister of Transport Jeff Radebe revealed the prototype station of the city’s much-anticipated bus rapid transport (BRT) system at a ceremony in November 2008. The station is located in Joubert Park, close to Johannesburg’s present train station.

While the Joubert Park station was built on-site from scratch, subsequent stations will be constructed in a modular fashion at a central point and assembled on-site. The modular design was created with the input of many different interest groups and is considered a cost-effective and streamlined approach to station construction.

Meanwhile, the prototype station will undergo extensive testing by representatives from both the city and the public, including the disabled, and any necessary refinements to the design will be made as they are needed.

“The BRT system is crucial to the success of South Africa’s transport system,” said Radebe. “Without a good bus service that is accessible, affordable and attractive to a broad range of people across society, local transport simply cannot work.”

The R2-billion ($206 000) Rea Vaya (Sotho, “we are moving”) project is gathering speed. City authorities have also just signed a memorandum of agreement with bus and taxi operators, who currently make up the bulk of public transport options. Their co-operation is vital to the timeous and successful implementation of the BRT system, said Masondo. Rea Vaya will also interface with the Metrorail system of trains.

The innovative BRT system aims to reduce traffic congestion, a major bugbear of Johannesburg drivers, by achieving a 70:30 ratio of public transport versus private transport before 2010.

The first phase will see a host of articulated buses traversing dedicated bus lanes in the centre of roads around town. With 150 stations, eight terminals and six depots on the cards and a total distance of 122km covered, Johannesburg residents can look forward to the start of substantially reduced journey times and stress-free commuting within six months. Phase 1 is expected to be fully complete by 2013.

The entire Rea Vaya system will cover some 330km of Johannesburg roads and will not only contribute to a more satisfactory commuting experience for the city’s residents but will also have been responsible for the creation of numerous jobs. City authorities expect 29 000 new jobs to be created in the first phase alone.

The system is also the single largest green project ever undertaken by the City of Johannesburg. It is estimated that if just 15% of regular car users who live in the vicinity of Rea Vaya switch to the BRT, the city will achieve a saving of 382 940 tons of carbon dioxide by 2010 and 1.6-million tons by 2020.

The first phase of Rea Vaya features two sub-phases, 1A and 1B. Phase 1A, comprising 48 stations along 40km, will come into operation just ahead of the Fifa Confederations Cup in June 2009. Phase 1B with a further 102 stations along 86km, will complete the first stage in time for the Fifa World Cup in 2010.

Operating on the same principles as the Cape Town system, which is also in its first phase of development, Johannesburg’s BRT system will feature a network of trunk, feeder and complementary routes serviced by a fleet of 427 22m-long trunk buses, 413 feeder buses and 350 complementary buses.

Stations are planned at regular intervals so that passengers won’t have to walk more than a few hundred metres along the route to reach any point of embarkation. The stations will incorporate smart card technology to collect fares before boarding, thus eliminating the possibility of delays as well as the need to carry cash. They will also be closely monitored with closed-circuit television, amongst other security measures.

During the operating hours of 5am and midnight buses will arrive at intervals of not more than three minutes in peak time, and at 10-minute intervals during quieter times. The system is expected to carry over 400 000 passengers daily, alleviating the congestion and accompanying stress experienced every day on the city’s busy roads and contributing to a better quality of life for Johannesburg residents.

All major locations in the city will be serviced and residents even in outlying residential areas such as Randburg, Dobsonville, Alexandra and Lenasia will be pleased to know that they have not been neglected. An inner-city circular route is also on the itinerary. The BRT network will connect with the Gautrain at Park Station.

The north to south Rea Vaya route, currently in the design phase, runs from Regina Mundi Catholic church in Soweto to the business suburb of Parktown. Another north to south route connects Parktown with Sunninghill north of Johannesburg.

The look and feel of buses will be decided on only after an extensive public participation process, currently underway.