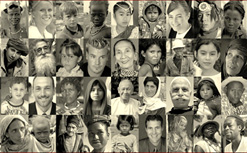 Declarations taken at the Durban
Conference to end racism in all its forms,
will be reviewed over five days in
Geneva.
(Image:Durban Review Conference)

The heated debate of racism, prejudice and racial discrimination once again takes the spotlight as several countries gather in Geneva, Switzerland to attend the United Nation’s Durban Review Conference.

South Africa’s main concern, which it hopes to express during the conference, is that whilst inroads have been made in implementing some of the outcomes of the Durban Conference, major problems still exist, both locally and internationally,  in the fight against racism.

Dlamini-Zuma is also expected to make a call to western countries to step-up their efforts in ensuring that race-related incidents decline.

The UN Durban Review Conference is convening under the theme “United against racism, dignity and justice for all””..

UN secretary-general Ban Ki Moon opened the conference on 20 April 2009, encouraging delegates to stand up for human rights, “There comes a time in the affairs of humankind when we must stand firm on the fundamental principles that bind us.”

“There comes a time to re-affirm our faith in fundamental human rights and the dignity and worth of us all. A time to give the virtues of tolerance and respect for diversity their fullest due and look beyond a past that divides us toward a future that unites us. That time is now, ladies and gentlemen. That time is now,” he said.

The conference is in aid of implementing the Durban Declaration and Programme of Action (DPPA), which was adopted at the 2001 Racism Cconference in Durban, Kwa-Zulu -Natal.

Several non-governmental organisations (NGOs) as well as representatives from civil societies are expected to participate.

Race too thorny an issue

The five-day conference, taking place between 20 and -24 April, has made headlines across the world in the global media after countries including the United States, Australia, Germany, Israel and the Netherlands boycotted the event, saying it would culminate in anti- Israeli sentiments.

The presence of Iranian President Mahmud Ahmadinejad, who is also expected to address the conference, caused great discomfort amongst Israeli and Jewish groups. The general concern was that Ahmadinejad’s presence would turn the event into an anti-Semitic gathering.

The Obama administration took made the a decision not to attend the to withdraw from the conference based on its concerns over concerns about on the draft document circulated ahead of the start of the conference saying stating that the declarations taken during the Durban Conference could restrict freedom of expression.

The US, along with Israel, walked out of the last conference in Durban, after it cited an unfair attack on Israel, where Zionism was equated to apartheid.

However, human rights organiszations in America are urging the government to attend the conference.

The Human Rights Watch’s New York branch has spoken out about the decision taken by the Obama administration to boycott the event, “It would be a grave mistake not to attend the conference, ” said Ian Levine, director of Human Rights Watch.

“We feel that the document has improved considerably since negotiations first started and that we actually have a chance now to make the Durban Review Conference into a serious contribution to the international fight against racism.”

Reacting to the US decision not to attend the conference, South African-born UN high commissioner for Human Rights Navi Pillay said on 19 April, a day before the start of the conference, that the decision taken by the United States is regrettable, “I am shocked and deeply disappointed by the United States’ decision not to attend a conference that aims to combat racism, xenophobia, racial discrimination and other forms of intolerance worldwide.”

On the US’s concern over the proposal to reaffirm the declaration taken during the Durban Conference, Pillay said she was confident that an amicable solution could have been reached, “I believe that difficulty could have been overcome,” she said.

“It would have been possible to make it clear in a footnote that the US had not affirmed the original document and therefore is not in a position to reaffirm it, which is a routine practice in multilateral negotiations to enable consensus-building while allowing for individual positions to be expressed.”

Commenting on the boycotts, Ban Ki- Moon said he was deeply disappointed, “Some nations, who by right should be helping to forge a path to a better future, are not here.,”

“Outside these halls, interest groups of many political and ideological stripes shout against one another in acrimony. They, too, should be with us, talking together.”

While France and Britain are in attendance at the conference, both countries have sent junior diplomats.

Despite the boycott of the conference by some countries, the event has continued to receive  support from many foreign countries. .

The pope urged countries to join forces in order to eliminate all forms of intolerance and discrimination in the world.

He described the conference as an “important initiative” as racial discrimination and other forms of intolerance still exist, even though history has continued to teach human kind that such practices divide instead of unite.

The Canadian Jewish community, have also voiced their support for the conference. A statement posted on the community’s official site states, “For us, the Holocaust legacy ‘Never Again’ means never again for all peoples.”

“The Durban Review offers a fitting forum in which to honour those who died in the Holocaust. At the Durban Review, nearly all of the nations of the earth will gather to affirm their commitment to implementing the Durban Declaration and Programme of Action, with its ambitious and admirable mandate to ‘end racism in all its forms.’.”