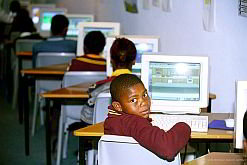 The two companies have signed an R8-billion (US$1.2-billion) deal that will see the roll-out of fast-paced broadband internet to communities in the Northern Cape, Limpopo and Mpumalanga provinces over the last quarter of 2012 and the first quarter of 2013.

According to the agreement, the companies will build a satellite-based global internet backbone with a constellation of eight medium-earth orbit (MEO) satellites.

These MEO satellites will provide faster internet access and clearer voice communications and video conferencing than standard communication satellites, as they will be four times closer to the earth.

Mavoni CEO Tinyiko Valoyi said his company wants to focus on providing internet to underprivileged areas of South Africa to help develop them and improve the lives of people living there.

Valoyi added that his company would focus on rolling out internet in schools and government institutions. The first province they would concentrate on would be the Northern Cape where they would provide internet access to an estimated 1 500 schools, which would benefit about 185 000 pupils.

Mavoni will also partner with the provincial government of Limpopo to bring internet connectivity to more than 500 schools there.

“We decided to start with the Northern Cape as it is often a neglected area when it comes to connectivity. Limpopo and Mpumalanga are also high priorities. Traditionally, these have been areas where fibre networks have not been able to reach.”

Valoyi said his firm is currently talking with various other provincial departments and municipalities which could also benefit from the initiative.

He said no contracts have yet been signed with any of the departments and municipalities, but they were looking to get them finalised towards the end of the year.

‘We are ready to advance’

Bandile Thusi from Nonzwakazi township in the Northern Cape said he was pleased to hear about plans to bring internet to schools in the province.

“It’s really great news. Most communication is done via the internet these days and people in our areas, especially the young people, need to have good computer skills and a great knowledge of the internet in order to apply for work and be ready for the workplace.”

“We are ready to advance,” said Nolwazi Zwane from Botleng township in Mpumalanga. “As a community, we are keen for ways to develop ourselves and see progress in our area. Having internet will help us stay connected with what is happening with the world around us, and help educate ourselves further.”

Chifiwa Makhwedzha from Nkowankowa in Limpopo said the initiative would be a great way to increase productivity in government departments.

“This will help things work faster in some of the state departments here. At times, something that could have been done fairly quickly takes longer because of the communication channels. With internet, it will hopefully be quicker to get assistance at government departments.”

Makhwedzha said he is also happy that schools will be getting internet as that should improve the quality of education.

“I’m particularly glad about the schools being the first on the list to get connected. Teachers at schools will now be able to get educational material for the subjects they teach through the web. They can then use this material to educate themselves and also to teach the students.”