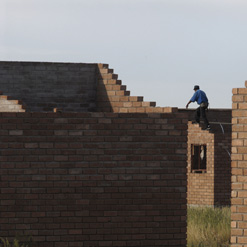 The South African government is to extend its Expanded Public Works programme fourfold in the next five years, spending R4-billion (US$440-million) to create 4.5-million job opportunities by 2014. If successful, this will give work to roughly 10% of the country’s population.

The EPWP uses public funds to boost job creation and skills development. It puts the unemployed to work on labour-intensive public projects such as road building, thereby not only providing them with short-term jobs but also helping them learn the skills they need for more permanent employment.

Cabinet approved the initial five year plan in late 2003 and the EPWP officially started the following year. In late 2008, Cabinet agreed to roll-out the second phase.

The first phase managed to reach its target of creating 1-million jobs in 2008, a full year before its deadline. In the second phase, the focus will shift to home-based care and community health projects.

The second phase has several new features. First, provinces and municipalities will be given incentives to reach – or surpass – their job targets.

“To be eligible, provinces and municipalities need to meet the agreed minimum participation targets for women, youth and people with disabilities, and employment creation targets using their conditional infrastructure grants, as well as report on their contribution to the EPWP to the national Department of Public Works,” Deputy President Baleka Mbete said at the launch of the second phase in Cape Town on Saturday.

“Other key adjustments to the programme design include the establishment of a fiscal incentive committed to this programme to reward the creation of longer term, more stable employment in provinces and municipalities. This is based on performance and is not a planning-based allocation.”

Civil society will also have a role in the new phase . Mbete said that, for the first time, the government will fun or co-fund job-creation projects managed by nongovernmental organisations.

“As EPWP moves from the first to the second phase, there is an urgent need for the programme to be bigger and better,” Mbete . “This need for a bigger EPWP encouraged us to grow the programme fourfold in the next five years.”

An important benefit of the EPWP is improved public service, as more people work in essential services. This has led to positive, if unexpected, developments. For example, EPWP-trained fire-fighters now attached Working for Water and Working for Fire, worked alongside professional firefighters, did an excellent job in fighting the wildfires that engulfed the Cape Pensinsula recently.

At the launch, Public Works Minister Geoff Doidge emphasised the importance of a joint partnership between the government and ordinary South Africans.

“EPWP is your programme, with the sole aim of ridding you of the yoke of unemployment and poverty,” he said. “Take this programme wherever you go.”