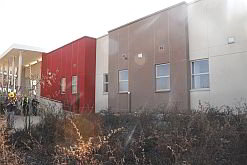 The state-of-the-art centre cost R13.8-million (US$2-million) to build and equip with the necessary technology. The Children’s Hospital Trust managed to raise these funds through donations in just 18 months. It was officially launched on 22 June 2011.

The centre, which has nine stations, will focus on developing and improving endoscopic surgery skills for surgeons in South Africa and the rest of the African continent.

Previously, African paediatric specialists and surgeons needing paediatric endoscopic surgical training had to travel to Europe or the US, as there were no centres in sub-Saharan Africa.

She said the centre would also offer hands-on training courses at various levels in specialties such as anaesthetics, ear nose and throat, neurosurgery and urology.

Endoscopic surgery is a minimally invasive procedure involving a long, rigid tube with a camera and light attached, otherwise known as an endoscope. The device is inserted into the body through a small incision and the surgeon views the image displayed on a monitor. The surgeon also makes other small incisions to insert instruments to do the necessary surgical procedure.

Prof Alastair Millar from the Children’s Hospital said the benefits of having minimally invasive surgery are that patients experience less operative pain and infection risk, a shorter hospital stay and faster recovery with less scarring.

“Increasingly, minimal access surgery is becoming the gold standard and conventional large incision surgery will soon be regarded as obsolete. A training centre such as this allows our surgeons of the future to be at the forefront of current surgical practice,” said Millar.

Speaking at the opening of the centre, Western Cape Minister of Health Theuns Botha thanked the donors who made it possible to build the hi-tech training facility.

“The training centre certainly offers the Red Cross War Memorial Children’s Hospital further growth opportunities and expansion into the continent. This underscores the Western Cape’s leading role on this continent with regard to training and skills transfer.”

He said the hospital has become a national resource and has an international reputation as a centre for excellence in its ability to deliver paediatric and surgical services equivalent to those found in developed countries.

Dr Lungi Linda, hospital CEO, said the institution prides itself in being the first for any new developments in the field of paediatrics, be it the cutting-edge technology or highly specialised procedures or operations.

“What underpins these outstanding achievements for the hospital are the skills, knowledge and expertise within the hospital and the good healthy partnerships with the private sector. Thank you to our donors who are always willing to give for the benefit of sick children.”