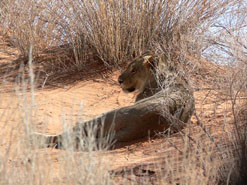 The climate park will go a long way to
help animals such as this lion, resting in the
shade in the Namaqua National Park, to
cool down.
(Image: South African National Parks)

Global warming has become a hot topic in both environmental and political circles, and South Africa has not been left untouched. The country’s wildlife in particular stands to suffer from an increasingly warm and dry climate.

A new addition to the Namaqua National Park in the Northern Cape province is expected to take some of the heat off its inhabitants. The newly acquired 63 000ha of land along South Africa’s west coast will allow animals to migrate to cooler parts of the park. The land will increase Namaqua’s size to 144 000ha, making it the fifth largest national park in the country.

According to South African National Parks’ (SANParks) managing executive of park operations, Paul Daphne, the park’s extension from sea level to an elevation of around 1 700m will allow a greater chance of survival for both animal and plant species.

“Our state-of-the-art park will be able to accommodate the inevitability of climate change,” he says. “There may be other national parks where this climate change accommodation could take place, but this is the first one consciously designed with that in mind.”

From diamonds to game

The new addition to the Namaqua Park is owned by diamond mining company De Beers and has been leased to the SANParks for 99 years. Once the lease expires, SANParks will have the option of extending the lease for a further 99 years.

The land started its commercial life as a diamond mine, but is now home to sheep farmers.

Over the next three years, SANParks will start the process of opening the land’s borders to the existing park’s grounds. An estimated R8.5-million (US$852 000) will be spent on converting the new land into a suitable game park.

According to SANParks, 55 local workers will be hired to rehabilitate old roads, 4×4 tracks and historic mining sites. New hiking trails and other game park facilities will also be added to the extension.

Of further global environmental interest is the area in the park known as a biodiversity hotspot – the Succulent Karoo biome, or ecosystem. According to SANParks.org, this biome has been identified as a priority for protected area development. The new land’s coastline will increase the sanctuary’s ability to protect animals and plants that thrive in similar climatic and geographic environments.

“The Succulent Karoo biome has been identified as a priority biome by the department of environment affairs and tourism, largely because of the high number of endemic species. It is one of the biomes with the least percentage under conservation,” says Daphne.

The Succulent Karoo biome is mostly characterised by low winter rainfall and extreme summer aridity. Rainfall in the area varies between 20 and 290mm per year while summer temperatures often peak at 40°C. Fog is common in coastal areas and mountain winds blow throughout the year.

According to De Beer’s head of ecology, John Kruger, the conservation of the area will enhance the potential for “ecologically-friendly tourism, and therefore create new, sustainable employment opportunities”.

Rising global temperatures are a cause for concern for environmentalists around the world.

According to the South African Climate Action Network, the predicted effects of climate change in South Africa include higher temperatures, particularly in the arid areas; a reduction in rainfall in summer rainfall areas; increasing incidents of droughts and floods; and rising sea level threatening low-lying areas.

Humans will not be spared. Climate changes will increase various health risks ranging from skin cancer to extended outbursts of cholera and malaria.

A June 2008 report released by the International Panel on Climate Change indicated that up to two-thirds of the animal species in the Kruger National Park face extinction if global temperatures increase at the current rate.

Speaking at a conference on climate change in July this year, Minister of Environmental Affairs and Tourism Marthinus van Schalkwyk addressed the importance of avoiding what he termed the “unmanageable impacts” of climate change.

He said global warming should be curtailed through a worldwide response focused on prevention rather than cure.

“This represents a make-or-break challenge to world leaders. To avoid the worst impacts of climate change, all countries need to carry their fair share of responsibility to limit a global temperature increase to below 2°C.

“It will be a failure of this generation of leaders if any developed country shirks its responsibility for the problem.”

According to Van Schalkwyk, South Africa needs to build a low-carbon economy to reduce greenhouse gas emissions, and a climate-resilient society.

It would not, he said, be economically, environmentally or politically sustainable for the country to continue without a carbon constraint programme.

A 2002 report by the University of Cape Town on the economic effects of climate change in South Africa indicated that both commercial and subsistence farming stood to take a heavy blow.

Although agricultural systems would not be nearly as badly affected as natural systems, the change in rainfall, temperature and CO2 levels would reduce crop yields.

Because of the general positive effect of CO2, the impacts on crop production were found to be relatively minor in relation to the value of the sector as a whole.

The report concluded that the greatest potential impact climate change would have on South Africa would be in the lucrative tourism sector, which makes up 3% of gross domestic product.

It is, however, the non-market elements which stand to lose the most from rising global temperatures – loss of biodiversity and natural resources, and a grave impact on human health.