With the launch of two important new initiatives, 2009 could be the year the prevention of HIV prevention takes centre stage in South Africa. Years of workshops and speeches in which Aids experts and politicians talked about the need to prioritise prevention are finally translating into action.

The difference between these campaigns and South Africa’s previous prevention efforts lies in the degree of partnership and the consistency of their messages.

“I think there’s a big move in South Africa to put prevention back on the agenda and we’re all on the same page, and I don’t think we’ve ever had that before in this country,” said Richard Delate, country programme director for Johns Hopkins Health and Education in South Africa, the organisation behind the Scrutinize campaign. 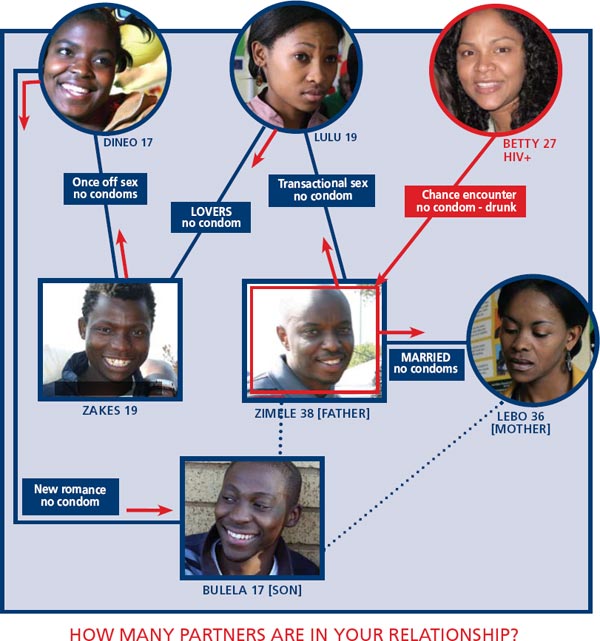 A graphic depiction of the consequences of multiple and concurrent sexual partnerships, from a OneLove booklet.

Successful prevention responses in other countries, such as Uganda’s “zero-grazing” campaign, have been characterised by a unified approach that drummed home a single, clear message. In South Africa, a lack of coordination led to various worthy efforts that failed to slow the country’s rate of 1 500 new HIV infections a day in 2005, according to the Human Sciences Research Council.

“You cannot remove some of the political tensions around HIV in South Africa from the interventions that have happened,” said Lebo Ramafoko, senior executive for media at the Soul City Institute for Health and Development Communication, the organisation leading the OneLove campaign in South Africa.

“Since 1994 … I’ve been doing cutting-edge work on HIV, but lack of leadership can compromise even very good efforts. We worked in silos – different people were focusing on different things.”

The OneLove campaign, by contrast, brings together players from government, civil society, traditional and religious leadership, business and academia. Monthly meetings aim to ensure that the partners are staying on message and not duplicating efforts.

“I think we’re going to have better success now because this campaign, not only is it a multi-country campaign, it’s a multi-partner campaign; we’re all working together now,” said Ramafoko.

It is probably no coincidence that this newly unified response came about after a changing of the guard at the Department of Health. Barbara Hogan, who replaced Manto Tshabalala-Msimang as health minister in September 2008, has lent her support to the OneLove campaign and has publicly endorsed its main message of remaining faithful to one partner.

Previous prevention campaigns have been fairly successful at convincing people to use condoms when they have casual sex, but have failed to persuade them to use protection consistently in longer-term relationships.

This is a conundrum for prevention efforts globally, but researchers believe it has had particularly devastating consequences in Southern Africa, where it is more common for people to have two or more partners at the same time, allowing the HI-virus to spread rapidly through overlapping sexual networks.

Multiple concurrent sexual partnerships (MCPs), as social scientists have dubbed the practice, were identified at a 2006 Southern African Development Community meeting as a key driver of the region’s HIV epidemic.

Despite their very different approaches, both the Scrutinize ads and the Soul City television soap opera – the mass-media component of South Africa’s OneLove campaign – are informed by research findings on MCPs.

The Soul City series explores many of the reasons people have more than one partner, through its main storyline about Zimele, a middle-class married man and a father of two who has an affair with 19-year-old Lulu.

Lulu has a boyfriend her own age, but becomes involved with Zimele because she needs his financial support. Zimele is influenced by his friends, who regard having girlfriends on the side as normal behaviour for a man.

The OneLove series is the ninth Soul City has produced since 1994. Previous series have focused on care, support, testing and treatment, as well as other health issues. But the “multiple and concurrent partners” theme, which lends itself so well to the soap opera format, has been particularly popular.

Every Monday night 6-million viewers – 52% of the total viewing audience at that time, with nearly half of them men – tune in to watch the series. On Tuesdays, radio stations throughout the country air call-in discussions about the previous night’s episode.

The goal of the OneLove campaign is to reduce new HIV infections by 10% by 2011, but Ramafoko believes the real measure of success would be a reversal of the social acceptability of having multiple partners.

“Even before we see a drop in infections, if we find people frowning upon men who have 19-year-old girlfriends, to the point where they themselves no longer see it as a macho thing, that would be huge,” she said.

“It’s not a moral campaign. We’re not saying you won’t go to heaven, we’re saying you’re at risk, and you’re putting your families at risk.”

The health department’s own behaviour-change programme, Khomanani, is coming to the end of a two-year campaign called Zithande (“love yourself” in isiZulu), which has used print, radio and television adverts to link self-worth with preventing, testing and seeking treatment for HIV and other health problems.

The programme has a wide reach, with information materials translated into South Africa’s 11 official languages distributed to every corner of the country and over 1 500 volunteers taking its messages into communities and people’s homes.

However, Cyril Sadiki, Khomanani’s programme director, explained that the future of the programme was uncertain. The Department of Health outsources its implementation in a tender process, and although the current tender is due to expire in April, it has yet to be advertised.

“It makes it very difficult to plan anything huge,” he said.

When Khomanani’s previous tender expired in 2006, its programmes lapsed for eight months.

“When you allow that kind of disruption to happen, it doesn’t help investments,” said Sadiki. “We’re hoping they will just extend the current management until a new company is appointed, to make sure momentum is not lost.”

He also hopes that whichever company takes over the running of Khomanani, it will “find a good spin on MCPs” while retaining the well-established Zithande brand.

South Africa is only two years away from the deadline it set itself in the current National HIV/Aids Strategic Plan of reducing new infections by 50% by 2011.

The Scrutinize and OneLove campaigns have raised the bar for prevention efforts, but it is a bar that will need to keep rising if the country is to manage an HIV burden that is already the largest in the world.

Future campaigns will need to respond more quickly to the latest evidence on what is driving infections, said Delate.

“We already have [antiretroviral drug] stock-outs. Unless we get to the point of stopping infections, there’s no way we can continue to put everyone on treatment.”