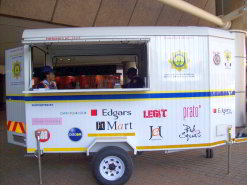 The South African police are able to be
more mobile and visible, thanks to the
mini police stations.
(Image: Edcon)

The fight against crime has taken an innovative turn, with the deployment of more mobile police stations in various central business districts around the country.

Edcon, Southern Africa’s leading clothing and textiles retailing group, has provided the South African Police Service (SAPS) and the Community Policing Forum with 10 trailers worth R800 000 (US$119 000) in total.

With the new additions, the total number of police trailers has increased to 19 – this allows the project to go national.

The objective of the project was to boost awareness of crime and help improve police presence, visibility and service delivery in crime hotspots.

According to Edcon’s group stakeholder relations manager, Laverne Leibrandt, the trailers will serve the communities within the Edcon trading areas and keep them safe.

The stations, which look like hot dog stands, come equipped to police specifications and will be deployed in Soweto, the East and West Rand in Gauteng, Mitchells Plain in the Western Cape as well as central Cape Town, Pietermaritzburg, Durban, Pretoria, Polokwane and Nelspruit.

The idea of the mobile station was conceived by Independent Newspaper’s The Star publication when they launched the Movement against Crime initiative in September 2010. At the time the Editor’s Fund provided R1-million ($149 000).

South Africa’s Venter Trailer company received the commission to build the mobile police stations, which were destined for Johannesburg’s central police station and were unveiled at a ceremony in 2010.

Vendors and businesses in the city have reacted positively to their presence, and many have stated that they feel more confident and secure as they go about their daily trade.

The idea has since caught on with other organisations that are looking to combat crime.

Independent Newspapers’ project manager Taryn MacKay described Johannesburg’s inner city, where The Star’s offices are situated, as a hotbed of criminal activity. The newspaper saw the need to curb crime in the area and therefore established the initiative.

“Johannesburg catches more attention when it comes to crime so we approached various organisations in the inner city to sponsor the trailers,” said MacKay.

When Edcon noticed a significant reduction in shoplifting from their stores because of the presence of the trailers, they opted to sponsor 10 more.

Each trailer is manned by two police officers and is well equipped to serve the community it is deployed into.

“It has the resources to make arrests, take statements and act as an information centre,” said Leibrandt.

There are interfaces on both sides of the trailer, as well as a handcuff handle to which apprehended suspects will be bound before they are picked up and taken to the closest police station.

Jackie Mathebula, Edcon’s transformation and corporate affairs executive, said the trailers will provide a channel of communication between shops, offices, security companies and the police.

She added that this will strengthen the relationship between communities and the police.

Communities and police working together

MacKay said the public has taken to the mobile trailers, and that although feedback in Johannesburg has been positive, it is too early to gauge the effectiveness of the Edcon-sponsored trailers in other cities.

When law enforcement officials consulted citizens they found that people wanted police to be easily accessible and visible, to swiftly respond to reported incidents, to ensure that crimes will be investigated and criminals be charged, and to root out corrupt police officers.

Gauteng province’s police commissioner Lieutenant General Mzwandile Petros added that communities have pledged to work with the police to tackle these issues.

He acknowledged what The Star’s deputy editor Jovial Rantao said of the initiative; that the fight against crime is a way of defending the democracy that many people had fought and died for.

The government has also played a part in the acquisition of the trailers. The City of Johannesburg sponsored a trailer in last year’s roll-out.

According to MacKay, The Star has worked “hand in glove” with the Gauteng provincial government as well.

Andy Mashaile, the Gauteng provincial chairman of the Community Police Board , believes it is his department’s responsibility to protect the 11-million people living in the province.

He added that every resource is needed for police to do their job efficiently.