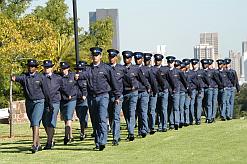 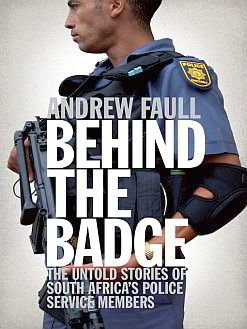 Andrew Faull, senior researcher at the ISS,
is also author of Behind the Badge, an
in-depth look at the lives of South African
police, who tell about their experiences
in uniform.
(Image: Books Live)

A recently launched initiative to promote professionalism in South Africa’s police force calls on the public to speak out about good and bad cop conduct.

The Institute for Security Studies (ISS) launched the “Promote Professional Policing – reward a cop, report a cop” campaign in Johannesburg on 1 September 2011.

The campaign aims to encourage citizens to report police involved in corruption, and recognise those who do well in their profession.

It was brought about after the ISS’s Crime and Justice Programme (CJP) delved into the public’s perception of the police and the root of corruption among officers.

The programme found that the majority of South Africans perceived the police as lazy and corrupt.

CJP head Gareth Newham said: “Whilst there is no denying that some deserve that label, many police men and women want nothing more than to serve the public with pride.”

Newham added that because there were police officers who were courageous, respectful and dignified; members of the public should encourage them by recognising their efforts.

Police Minister Nathi Mthethwa said at the launch: “Understandably, members of the public often take the time to report complaints and negative experiences they have of the police, and we take these complaints and experiences very seriously.”

Mthethwa also urged the public to support those officers who were professional and service-orientated.

The minister said that the campaign was a platform for the public to voice their experiences with the police, be they good or bad.

By showing recognition to those selfless police who strive to protect and serve, those who are corrupt will be isolated and the decline of it will be evident, said Newham.

Measures have been put in place to help the public report on negative and positive policing.

The Crime Hub website provides tips on how promote policing excellence, and a Facebook page called Professional-Policing has been set up where citizens can join a forum to share their experiences with others.

There are also tips on the Facebook page for how people can reward good policing and report cases of bad police conduct.

In addition, the public can follow @RewardaCop on Twitter for the latest news on good and bad policing.

Creating a culture of better policing

Mpho Kwinika, president of the South African Police Union, said: “This campaign comes at an opportune time when police morale is very low. The best reward a cop can get is when communities work with the police to aid an arrest.”

According to Andrew Faull, senior ISS researcher, studies have found that the public’s perception of police is not based on how effective they are in tackling crime, but rather how they treat civilians discourteously, abusively or with unnecessary force.

Although the recently released crime statistics show that violent criminal acts are on the decline, police still need to work on their treatment of the public to bolster their reputation.

Faull said: “What police must realise is that annual announcements of declining crime will only win police momentary legitimacy, what is far more important is that every encounter between a police official and a member of the public is based on procedural justice, fairness, and courtesy.”