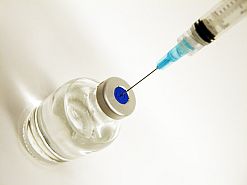 South Africa’s pneumococcus vaccine
programme is about to get underway and
will save thousands of lives.
(Image: stock.xchng) 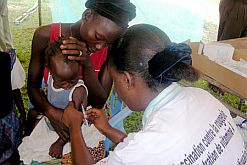 The vaccine is targeted at children five
years old and under – the most vulnerable.
(Image: World Health Organisation)

South Africa will become the first African country to freely distribute a pneumococcal vaccine amongst its children – the main victims of deadly pneumococcal diseases such as meningitis and pneumonia.

The life-saving announcement was made at the 2009 Regional Pneumococcal Symposium held in Johannesburg in early March. Deputy Minister of Health Molefi Sefularo said the new vaccine would be available from April 2009 as part of the government’s primary immunisation programme.

The goal of the symposium was to review progress towards safe, effective pneumococcal vaccines and address the question of how to make sure they get to the world’s poorest children. Delegates were also brought up to date regarding the extent and burden of pneumococcal disease in Africa.

The vaccine Prevnar, known as pneumococcal conjugate vaccine (PCV), is designed to be effective against the seven types of the deadly pathogen that cause 70% of all invasive pneumococcal disease in South African children; it is therefore a seven-valent vaccine.

Manufactured by Wyeth, Prevnar has been available in South Africa since 2005, but one of the biggest controversies surrounding the drug has been its exorbitant cost. At nearly R2 717 ($260) for four doses, it is far beyond the budget of people in developing countries.

According to Professor Till Barnighausen of the Africa Centre for Health and Population Studies at KwaZulu-Natal University, patients in developing countries who do not have free access to PCV may have to wait up to 15 years before the price drops to a level within their grasp.

However, there is no doubting the efficacy of PCV. Clinical trials carried out between 1998 and 2000 in South Africa and Gambia, with a nine-valent formulation on nearly 40 000 infants, showed a drastic decrease in pneumococcal infections in fully vaccinated children.

At six, 10 and 14 weeks of age, 19 922 children received the vaccine and 19 914 received a placebo. The vaccine reduced the incidence of invasive pneumococcal disease by more than 65% in HIV-positive children and by more than 83% in HIV-negative children. It also reduced infection by antibiotic-resistant strains by between 56% and 67%. The results of the study were published in The New England Journal of Medicine in 2003.

“Widespread use of the vaccine will contribute to reducing the burden of childhood illness,” said Madhi in an article published in 2008 in the South African Journal of Child Health. “It will assist in achieving the Millennium Development Goal aimed at reducing under-five mortality by two-thirds by 2015 compared with 1990 rates. The launch of PCV for all children is a great step forward for child health in South Africa.”

A killer disease – but preventable

Every year between 800 000 and one million children under the age of five succumb to pneumonia, meningitis, and other invasive pneumococcal diseases, according to the World Health Organisation. In South Africa pneumococcal diseases kill almost 350 out of every 100 000 infants under 12 months of age, and infection rates have risen steadily since the mid-1990s because of Aids, according to Sefularo.

Pneumococcal disease is the leading cause of vaccine-preventable death in young children. Unfortunately S. pneumoniae has developed both intermediate and high levels of resistance to some of the most commonly used antibiotics and therefore preventive treatment is the preferred means of combating the disease.

Despite the fact that pneumococcal conditions are preventable, millions more young survivors are permanently affected, often suffering intellectual impairment, hearing loss or seizures for the rest of their lives.