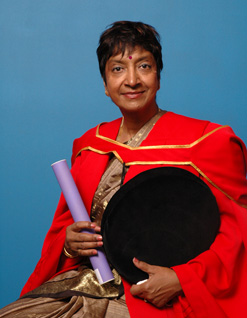 Judge Navanethem Pillay is widely
respected as a human rights activist
and has been appointed as the new
UN Human Rights High Commissioner.
(Image: Rhodes University)

South African judge and former defence lawyer Navanethem Pillay, who was nominated by United Nations Secretary-General Ban Ki-moon for the position of UN High Commissioner for Human Rights – one of the highest-profile and most controversial UN jobs – has officially been appointed to the position. Her appointment was approved at a General Assembly session held on 28 July 2008 in New York.

“I think I come with a real understanding of what it’s like to have your human rights violated,” Pillay said in an interview with United Nations Radio, adding that her experiences under the apartheid system sometimes left her thinking that there was no justice in sight.

Pillay will succeed Canadian Louise Arbour, who took office in July 2004 and will not seek a further four-year term in office. She steps into her new position on 1 September 2008.

A number of landmark decisions were reached during Pillay’s tenure as presiding judge. The case against the mayor of Taba commune in Rwanda, Jean-Paul Akayesu, was significant in that it established rape as far more than just spoils of war, but a crime of genocide when committed with the intention of eradicating a particular ethnic group. Akayesu was found guilty of genocide, the first such judgement to be passed.

In fact, commented Pillay in a 2002 paper she delivered, in 1998 the Statute for the International Criminal Court became the first international treaty “to recognise a range of acts of sexual and gender violence as among the most serious crimes under international law. Most of these crimes had never before been explicitly articulated as crimes in any international instrument or domestic criminal code”.

It is reported that the US initially expressed reservations about Pillay’s nomination as Human Rights High Commissioner because of her pro-choice views regarding abortion and the fact that she may be less outspoken than her predecessor – particularly on matters such as Zimbabwe, as her native country has declined to officially condemn human rights outrages committed there.

However, US ambassador to the UN Zalmay Khalilzad told Reuters that there had been no formal opposition to Pillay’s appointment as there was no substance in the allegations against her.

Khalilzad congratulated Pillay on her achievement, saying that it was a very important job, one that required a strong voice. “We need a credible voice to speak on the issue of human rights issues, one of the key missions of the United Nations and we look forward to working with her.”

Human Rights Watch Executive Director Kenneth Roth commented that Pillay’s first challenge may be “taking on her own president regarding Zimbabwe”.

However, South African ambassador to the UN Dumisani Kumalo also rejected insinuations that Pillay might be too close to the government of South Africa, known – and not always respected – for its moderate stand on issues such as Zimbabwe and Iraq.

“She’s never worked for the South African government,” said Kumalo, affirming that Pillay would not serve the interests of the government in her new position.

Born to Tamil parents in Durban in 1941, Pillay has a distinguished career behind her. She studied at Natal University, completing both a Bachelor of Arts and Bachelor of Law degree, and later obtained a Master of Law and Doctor of Juridical Science at Harvard Law School in the US.

Pillay is known and respected as a champion for women’s and human rights in her home country, in the Southern African region, and throughout the world. In South Africa she represented many opponents of the apartheid regime during her time as a defence lawyer, helping to expose the use of torture and other inhumane methods of interrogation favoured by the government of the time. Like many others who took this stance, she was denied a passport for many years.

In 1992 she co-founded Equality Now, an international women’s rights organisation based in New York of which she is now an honorary director and trustee. She is involved with Pro-Femme Twese Hamwe (“twese hamwe” means “Let’s work together” in Kinyarwanda, the national language of Rwanda), a Rwandan women’s organisation that has received much acclaim for its contributions to reconciliation and nation-building after the 1994 Rwandan genocide.

Her humanitarian efforts have garnered international recognition. In 2003 she received the inaugural Women’s Rights prize from the Peter Gruber Foundation, a philanthropic organisation. Pillay shared the R1.5-million ($200 000) prize money with Pro-Femme Twese Hamwe. In her citation Pillay was described as “a hero for humanity and a special inspiration for women”.

Pillay is also a trustee of Lawyers for Human Rights, as well as a member of both the Women’s National Coalition and the Black Lawyers’ Association. She sits on a number of boards and committees, including the Gruber Foundation’s Women’s Rights Selection Advisory Board.