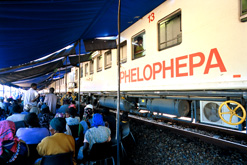 Patients await treatment on the
Phelophepa primary healthcare train.
During its annual nine-month journey, the
train stops for a week at each of its 36
destinations.
(Image courtesy of Roche) 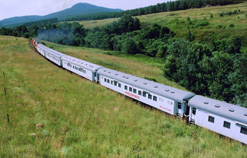 The train brings healthcare deep into
some of South Africa’s most remote
rural areas.
(Image courtesy of Roche)

For 14 years thousands of people from some of South Africa’s most remote and underprivileged communities have received essential health services from Phelophepa, known as the “miracle health train”. Travelling around South Africa between January and September each year, Phelophepa brings primary healthcare to people in rural areas, where there is little or no access to national health services. It reaches 45 000 individuals at 36 destinations every year.

Phelophepa, a combination of the Sesotho and Setswana languages, means “good clean health”. Since its inception in 1994 it has delivered just that to over 500 000 South Africans during its journey of over 150 000km. Services on offer include cancer screening and education clinics; psychology, optometry and dental clinics; and diabetes, prostate and PAP smear testing services. The train also has a pharmacy on board.

Phelophepa is an initiative of the Transnet Foundation, the corporate social investment (CSI) arm of the state-owned transport and logistics organisation. The Transnet Foundation has named health as one of its five primary areas of focus – the others are education, arts and culture, sport and under-utilised assets. The train is the flagship of the foundation’s health division and is viewed as one of the most successful CSI projects not only for Transnet, but for the country as a whole.

The project is such a success that Transnet has agreed to fund a second Phelophepa. Currently under construction, it should be operational by the end of 2008.

Dr Lillian Cingo is the manager of Phelophepa, while Transnet veteran of 30 years Lynette Coetzee is the project manager. Cingo, who has been with Phelophepa since 1995, trained as a nurse and midwife in South Africa and studied further in England in neurosurgery, tropical medicine, and HIV/Aids counselling. She has also completed a master’s degree in counselling psychology.

On 10 January 1994 a modest three coaches, rebuilt from redundant stock, took to the rails. Initially there was only an eye clinic on board but today Phelophepa comprises 16 carriages, is 339m long and weighs just over 600 tons. There are four additional clinics – the Roche health clinic, the Colgate dental clinic, a psychology clinic, and the Canon Collins Educational Trust for Southern Africa (UK) Edu-clinic. Both Roche and Colgate are founder sponsors.

The Canon Collins Trust has supported the Edu-Clinic programme for over a decade. The trust was set up in the 1960s by anti-apartheid activist Canon John Collins. It was banned by the apartheid regime because it paid for legal costs and supported the families of those targeted by the government for anti-apartheid activities. The trust also helped South African and Namibian political refugees with education in the UK, education they were denied in their home countries.

The aim of the Edu-Clinics is to educate up to 25 people from each destination in basic healthcare and hygiene. Communities nominate people for a five-day course that covers topics as diverse as family planning, nutrition and disease symptoms. After a week the attendees are equipped to play a role in improving the health of their communities after the train has departed.

During its annual nine-month journey Phelophepa spends a week in each place. Many of these areas have no access to even the most basic healthcare services and, once the word has gone out that Phelophepa is on its way, people resolve to do anything it takes to receive treatment. According to the Canon Collins Trust, patients have been known to walk up to 32km to join queues of thousands. Some have waited for two or three days to be seen.

“If a bus full of people arrive and it’s their only chance to see a doctor but we are fully booked up, I have a meeting with my staff to ask them ‘What can we do for these people?'” said Cingo in a speech to the London branch of Initiatives of Change in November 2007. “It’s about working together and teamwork. I’m not there, doing all this good work on my own!”

Patients do not pay for medical examinations but they are charged a very small fee for other services such as spectacles or tooth extractions. According to Cingo, most people insist on paying – this allows them to keep their dignity.

Phelophepa is not a travelling hospital – it offers basic healthcare. In addition to the pharmacy and clinics, it contains an admin office, a telecommunications control room, a dining coach and kitchen coach, its own power car that provides electricity when the train is stationary, a laundry coach, a storage coach with workshop, and four sleeper coaches that can accommodate 47 people. Twenty professional medical staff members live on the train while it travels.

The train offers practical experience for up to 36 final-year and postgraduate students from various disciplines. Senior medical students serve for two weeks at a time. Valuable training is also given to hospitality students, all of whom are supervised by former Blue Train chef Colin Boucher. During the remaining three months of the year Phelophepa undergoes maintenance while the students write exams.