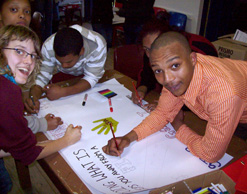 Students working together at a peace
camp.
(Image: Jennifer Stern)

While a large number of South African schools are exemplary centres of learning, it’s a sad fact that far too many are underfunded and overcrowded places where little learning takes place, and levels of violence are far too high.

For this reason, the Quaker Peace Centre (QPC) and Western Cape Education Department (WCED) have launched a number of initiatives to promote peace in the province’s schools.

One of these is the Safer Schools Project, launched in early to help increase security at schools, restrict the access of people who are neither students nor staff to school premises, and facilitate conflict resolution training.

But, that doesn’t solve the root of the problem, says Avril Knott-Craig of QPC.

“You’ve got 62 children in a classroom, it’s 32º outside (and probably hotter inside), they’re bored, and their hormones are running rampant,” she says. “It’s a recipe for disaster.

“When you’re bored, you make little spit-balls out of paper and shoot them at the teacher. You take the chewing gum out of your mouth and stick it in your neighbour’s hair, and they retaliate, and before you know it, it’s a free-for all and someone gets hurt.”

In July 2008, 126 people, including teachers and students from 17 schools and representatives from the WCED, the QPC and the Safer Schools Project attended a two-day Peace Indaba in Cape Town in July 2008.

The event, which was run as part of QPC’s Positive Discipline Project, was intended to workshop ideas on how to make schools in Cape Town safer and more conducive to learning – both of academic subjects and positive life skills.

A large part of the problem, says to Knott-Craig, is that violence is an integral part of school culture.

“While corporal punishment is technically illegal, teachers grew up in an environment where it was considered normal, and they have no other way of disciplining overcrowded and unruly classes.”

Martin Struthmann, the manager of QPC, agrees. He describes the culture of violence he experienced as a teacher in a Mitchell’s Plain school in the 1980s.

“The teachers spent the first few days of term making canes. Before the children arrived, they’d buy hosepipes, bamboo, sticky tape and stuff from the hardware store and make canes. It was part of the school culture.”

One of the many educational reforms introduced by South Africa’s new democratic government after 1994 was outlawing corporal punishment.

“Hitting children is against the law in terms of the Children’s Act, and the South African Schools Act,” Knott-Craig says.

“Teachers can be dismissed for using corporal punishment. The National Education Department says they are going to implement it but they don’t. They can’t. The cane is the only way some teachers can discipline classes. Corporal punishment was outlawed and then nothing was put in its place.”

“I’ve always been against corporal punishment,” Knott-Craig says. “I was never punished in this way as a child.  I taught in difficult schools in the eighties during the boycotts and all that. And I never used corporal punishment. It’s not necessary.  I’m not special, and if I can do it anyone can.”

While not wanting to trivialise the problems inherent in many schools, Knott-Craig wanted to showcase the schools that were not dysfunctional.

“The media was highlighting dysfunctional schools,” she says. “But the good schools needed to be acknowledged. There were lots of schools in the Graslow [Grassy Park and Lotus River] area doing great development work. There were many schools that could showcase good practice. Other schools could learn from them. Schools could share what was working.”

Knott-Craig and an ex-colleague, Greg Vlotman, who is now the principal of Sid G Rule Primary School in Grassy Park, were the motivating force behind the idea. They received eager assistance from Glen van Harte, the District South curriculum manager of WCED.

“His big thing was arts education,” Knott-Craig says of Van Harte. “He believed that arts education would reduce the violence in schools.”

The key to discipline, she says, is curriculum design and delivery.

“Where there is interesting work being done and [the students] are stimulated and challenged, there is no time to find mischief. If you can engage the learner you have a much greater chance of success.

“So we need to look at the bigger picture. Curriculum, management, ethos, culture of the school – all these issues. It’s what schools decide they will or will not tolerate.

“All the schools that were sharing the good practice didn’t have serious discipline problems,” she continues.

“They had disbanded their discipline committees. The teachers were doing really creative peace education in the classroom. One teacher had built a Zen garden and, when the learners got angry, she’d tell them to go play in the Zen garden and think about why they’re angry, and calm down.”

It’s certainly a new take on standing in the corner, and it’s probably more effective in the long run than a good clip on the ear.

The next step in the initiative was peace camps for students, the brainchild of Geraldine Goldblatt, Central District curriculum adviser for the WCED.

“Goldblatt said she wanted to run a non-violent camp for learners,” Knott-Craig says. “She’s done a huge amount of research into curriculum material that deals with the history of violence, and how we can use it to teach children about non-violence.

Goldblatt was given the go-ahead by Mackie Kleinschmidt, the Central District curriculum manager, with the WCED funding the camps and the QPC providing free facilitation.

The camp was held in Glencairn, with 60 students and 30 teachers from 11 schools attending. And it was not limited to so-called “problem” or “township” schools. Rhodes High School in Mowbray and Westerford, one of Cape Town’s top academic schools, also attended.

Knott-Craig admits she had a secret agenda – she was hoping the camp would spread the idea of peace clubs.

She had previously met Stan Jarvis, a teacher at Heideveld High School, which was situated deep in the Cape Flats. Jarvis had attended Knott-Craig’s positive discipline course, and had started a peace club at Heideveld.

In May 2008, when xenophobic attacks rocked Cape Town’s townships, Heideveld High’s peace club members asked Jarvis to organise a workshop on xenophobia to understand the violence. So Knott-Craig, Struthmann and Caroline Rakodi, from the UK, joined Jarvis for a one-day workshop with the theme What makes us African?

The answer that came out was, “The thing that makes us all African is the fact that we are all different.”

“It’s our diversity that makes us all one,” says Knott-Craig, smiling.

She didn’t have to do much work on her secret agenda. The students who attended the camp chatted to the Heideveld High peace club members, and decided they wanted peace clubs at their schools, too. So they started planning them then and there.

“They have so much fun,” she says. “They do interesting things. They were attending the peace jams and meeting Nobel laureates.” Peace jams are events organised by Nobel peace laureates who travel the world for a year engaging young people on matters of peace building.

“The teachers are so motivated. They involve them in so many things outside the curriculum. Through the British Council, they got linked up with Rivers of the World [an arts programme organised around rivers]. They select eight rivers, and one was the Liesbeek. Some of the peace club members went to London.”

Soon after that the second indaba was held at Heideveld High, with many of the same players.

One area in which Knott-Craig came up against some resistance in the planning phase of the camp and the indaba was the idea that teachers and students would participate on an equal footing. But she pushed for it.

“I think they have something to offer and must be seen as part of the solution not the problem,” she says.

“[The teachers] could not believe the profundity of what the learners had to say. They had good ideas – they challenged Glen [van Harte] and he took them seriously. It was right to have learners involved. Adults tend to speak for young people instead of letting them speak for themselves.  And,” she adds, smiling, “teachers are the worst.”

While the Non-Violent Schools Campaign is a joint  project jointly of QPC and WCED, it is intended to be self-sustaining.

“The peace clubs need to be sustained by the teachers and learners,” Knott-Craig says. “We will run programmes, for example, training in diversity, Alternatives to Violence Programmes and/or empowering workshops for young women. But they are their clubs. They have ownership of their clubs. QPC is just the engine that runs it in the background.

“My dream actually is that eventually the camp, the indaba, the peace clubs are all run by the schools and we all become redundant. Once that’s happened I’ll feel that we’ve achieved something.

“But ultimately, if change is going to come it’s going to come from the bottom up not the top down,” she says.  “I haven’t found the quick fix, but I am handing over to the learners. I believe in their idealism, and their ability to think outside of the box.”

With a laugh she adds, “They haven’t even found the box.”

Education is the winner