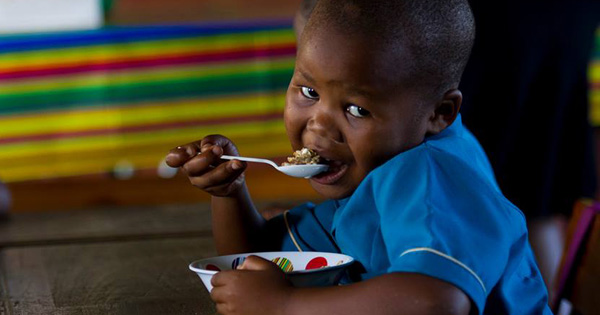 World Hunger Day, marked this year on 28 May, reinforced the truth that too many children are starving and need sustenance to concentrate at school and grow healthily. The South African National Health and Nutrition Examination Survey statistics, revealed on the day, were challenging and gloomy. They showed that one in eight people around the world faced food insecurity each day. (Image: Kelloggs Facebook)

It is said that breakfast is the most important meal of the day; and that you can’t teach a hungry child. But in South Africa, almost one in five children go to school every day with an empty tummy.

World Hunger Day, marked this year on 28 May, reinforced the truth that too many children are starving and need sustenance to concentrate at school and grow healthily. The South African National Health and Nutrition Examination Survey statistics, revealed on the day, were challenging and gloomy. They showed that one in eight people around the world faced food insecurity each day.

Breakfast for Better Days is a Kellogg’s initiative. The food company has committed to partnering with dairy group Parmalat and FoodBank South Africa to provide five million breakfasts to South African children this year. In attempting to change the lives of these children for the better, Kelloggs will donate more than R10-million in cereal and milk to FoodBank, which in turn will distribute the food to needy schools across South Africa.

This means that 25 000 children will have a breakfast every school day this year. This translates into 500 000 litres of milk and 150 000 kilograms of cereal.

“Providing regular breakfasts to these children, many of whom come from disadvantaged communities, gives them an opportunity to concentrate better in class,” says Neil Davison, the national operations manager of FoodBank South Africa. “The better concentration in class and significantly improved attendance figures, we know, we will go a long way towards improving the standard of education in these classrooms.”

Nationally, the initiative is providing approximately 25 000 primary school pupils with a breakfast of cereal and milk – over five million servings of breakfast throughout this year. Breakfast for Better Days is in its fifth month and has already served more than two million breakfasts to children at participating schools in Gauteng, KwaZulu-Natal, Western Cape and Eastern Cape.

In Western Cape, more than 7 000 pupils are on the Kellogg’s Breakfast for Better Days scheme. The schools chosen to be included were based on a number of different criteria, such as location and whether they had a feeding programme run by the government or privately.

“Breakfast is not just a meal; it’s part of the making of a brighter future. When kids start the morning right, there’s no end to the opportunities for fun and learning that each day can bring,” says Jack Kruger, Kellogg’s marketing category manager. “We want every child to have a bright start, fuelled by the power of breakfast. That’s why we are donating five million servings of breakfast in 2014, and hopefully we’ll help make a tangible difference in their lives.”

According to the World Hunger Project, World Hunger Day has a key focus on genuine partnership. “It seeks to highlight the positive actions taken by those existing on less than £1 (R17.50) per day, to end their own hunger,” it says. The day “seeks to inspire people in both the developed and developing worlds to show their solidarity and support to enable many more to end their own hunger and poverty and make the journey to self-reliance”.

If they are educated, children’s destinies can shift from poverty to prosperity as they gain the skills needed to lead healthy lives – but this can only happen when their brains and bodies are powered by food.

“The Breakfast for Better Days initiative is a social responsibility programme that we really wanted to be involved in, both because it will assist communities that struggle to put breakfast on the table, but also because it enforces how important breakfast is to a good start,” explains Parmalat’s marketing manager, Janine Greyling. “Good eating habits are established in childhood, and we hope that once these children and their families see the benefits at school of a cereal and milk breakfast, they will make it a habit for life.”

The World Hunger Education Service states that hunger is a leading cause of poverty. It results in poor health, low levels of energy as well as mental impairment, thus reducing the ability to work and learn effectively. Children are the most visible victims of hunger-induced undernourishment.

Seeing a change in the classroom

Children who don’t eat breakfast before school are at a disadvantage, and no one has better insight into this than their teachers. “It’s real,” says Nataly Horn, the principal of Ysterplaat Primary School in Brooklyn, Cape Town. “While it’s hard for many South Africans to comprehend the scope of the problem, I can tell you that we see hunger and the destructive toll it takes every day in the classroom. Absenteeism, lethargic children who can’t concentrate (and sometimes can’t even stay awake) and behavioural problems… Simply put, without food in their stomachs, children are not able to learn.”

Khuziwe Shiba is a Grade 2 teacher at Ikwezi Primary School in Mofolo North, Soweto, one of the schools benefiting from Breakfast for Better Days. She says: “The kids [who] have breakfast come to school bubbly, loving, smiling and active, and look forward to the day ahead. The ones [who] don’t have breakfast are gloomy, tired, passive and don’t want to play or participate. They are not able to concentrate and easily lose interest. A hungry child struggles to follow what is going on in the classroom.”

Studies indicate that breakfast helps children feel more alert and puts them in a better mood in the morning. That first meal of the day supports concentration in the classroom and helps fuel physical activity on the playing field, which can translate into more fun. Breakfast intake has also been associated with improved memory, test grades and school attendance. Cereal is high in carbohydrates, which are the main source of energy for the body and brain. Research has shown that children who start their day with breakfast tend to have a lower body mass index (BMI) and less chance of being overweight or obese.

Kate Hamilton, the fund development manager of FoodBank South Africa, explains: “Not only do the children appear to have greater physical well-being, but there has been a shift in mood as well. So, the programme is not a short-term one. They are looking towards a longer term solution to hunger and hunger in schools.”

Partners on the breakfast drive

FoodBank South Africa is the country’s largest food banking network. FoodBank is also Kellogg’s international partner in the global campaign, which will provide one billion servings of cereal and snacks in its support of global hunger relief by the end of 2016. FoodBank collects and transports the cereal and long life milk from Kellogg’s distribution centres and Parmalat to its own warehouses, where the produce is sorted and packed for each participating school, and delivered monthly.

Hamilton says: “It will affect [the children’s] potential to be great. These are future leaders who need to be brave and courageous.”

In another initiative, Lunch Buddies, Foodbank South Africa partners different schools – a more advantaged one with a disadvantaged one – and every Friday the former delivers lunch to FoodBank, which then distributes the sandwiches to the latter schools.

Roxy MacNaughton, FoodBank South Africa’s national programmes co-ordinator, manages the Lunch Buddies programme. She explains how it works: “Lunch Buddies provides children from under-resourced schools with sandwiches made by children who go to more resourced schools. The children at the donor schools pack an extra lunch which they leave at a collection point at their school. FoodBank fetches the sandwiches and delivers them to the beneficiary schools.”